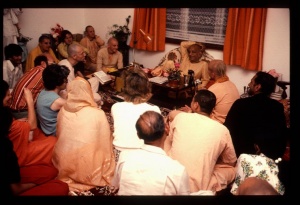 I offer my respectful obeisances to the all-glorious Advaita Prabhu, who forms the second branch of the eternal Caitanya tree, and to His followers, who form His subbranches.

Śrī Advaita Prabhu was the second big branch of the tree. There are many subbranches, but it is impossible to mention them all.

Śrī Caitanya Mahāprabhu was also the gardener, and as He poured the water of His mercy on the tree, all the branches and subbranches grew, day after day.

The fruits of love of Godhead that grew on those branches of the Caitanya tree were so large that they flooded the entire world with love of Kṛṣṇa.

As the trunk and branches were watered, the branches and subbranches spread lavishly, and the tree grew full with fruits and flowers.

At first all the followers of Advaita Ācārya shared a single opinion. But later they followed two different opinions, as ordained by providence.

Some of the disciples strictly accepted the orders of the ācārya, and others deviated, independently concocting their own opinions under the spell of daivī-māyā.

There is no need to name those who are useless. I have mentioned them only to distinguish them from the useful devotees.

Paddy is mixed with straw at first, and one must fan it to separate the paddy from the straw.

A big branch of Advaita Ācārya was His son Acyutānanda. From the beginning of his life he engaged in the service of the lotus feet of Lord Caitanya.

When Acyutānanda heard from his father that Keśava Bhāratī was the spiritual master of Lord Caitanya Mahāprabhu, he was very unhappy.

He told his father, “Your instruction that Keśava Bhāratī is the spiritual master of Caitanya Mahāprabhu will spoil the entire country.

“Lord Caitanya Mahāprabhu is the spiritual master of the fourteen worlds, but You say that someone else is His spiritual master. This is not supported by any revealed scripture.”

When Advaita Ācārya heard this statement from His five-year-old son Acyutānanda, He felt great satisfaction because of his conclusive judgment.

Kṛṣṇa Miśra was a son of Advaita Ācārya. Lord Caitanya Mahāprabhu always sat in his heart.

Śrī Gopāla was another son of Śrī Advaita Ācārya Prabhu. Now just hear about his characteristics, for they are all very wonderful.

When Lord Caitanya personally cleansed the Guṇḍicā-mandira in Jagannātha Purī, Gopāla danced in front of the Lord with great love and happiness.

While Lord Caitanya Mahāprabhu and Advaita Prabhu chanted the Hare Kṛṣṇa mantra and danced, there were various ecstatic symptoms in Their bodies, and Their minds were very pleased.

While all of them danced, Gopāla, dancing and dancing, fainted and fell to the ground unconscious.

Advaita Ācārya Prabhu became very unhappy. Taking His son on His lap, He began to chant the Nṛsiṁha mantra for his protection.

Advaita Ācārya chanted various mantras, but Gopāla did not come to consciousness. Thus all the Vaiṣṇavas present cried in sorrow at His plight.

Lord Caitanya Mahāprabhu then put His hand on the chest of Gopāla and told him, “My dear Gopāla, get up and chant the holy name of the Lord!”

When he heard this sound and felt the touch of the Lord, Gopāla immediately got up, and all the Vaiṣṇavas chanted the Hare Kṛṣṇa mahā-mantra in jubilation.

The other sons of Advaita Ācārya were Śrī Balarāma, Svarūpa and Jagadīśa.

When Kamalākānta Viśvāsa was in Jagannātha Purī, he sent a note through someone to Mahārāja Pratāparudra.

No one knew of that note, but somehow or other it reached the hands of Śrī Caitanya Mahāprabhu.

That note established Advaita Ācārya as an incarnation of the Supreme Personality of Godhead.

But it also mentioned that Advaita Ācārya had recently incurred a debt of about three hundred rupees that Kamalākānta Viśvāsa wanted to liquidate.

Lord Caitanya Mahāprabhu became unhappy upon reading the note, although His face still shone as brightly as the moon. Thus, smiling, He spoke as follows.

“He has established Advaita Ācārya as an incarnation of the Supreme Personality of Godhead. There is nothing wrong in this, for He is indeed the Lord Himself.

“But he has made the incarnation of Godhead a poverty-stricken beggar. Therefore I shall punish him in order to correct him.”

The Lord ordered Govinda, “From today on, do not allow that bāuliyā Kamalākānta Viśvāsa to come here.”

When Kamalākānta Viśvāsa heard about this punishment by Śrī Caitanya Mahāprabhu, he was very unhappy, but when Advaita Prabhu heard about it, He was greatly pleased.

Seeing Kamalākānta Viśvāsa unhappy, Advaita Ācārya Prabhu told him, “You are greatly fortunate to have been punished by the Supreme Lord, the Personality of Godhead, Lord Caitanya Mahāprabhu.

“Formerly Lord Caitanya Mahāprabhu always respected Me as His senior, but I did not like such respect. Therefore, My mind being afflicted by unhappiness, I made a plan.

“Thus I expounded the Yoga-vāśiṣṭha, which considers liberation the ultimate goal of life. For this the Lord became angry at Me and treated Me with apparent disrespect.

“When chastised by Lord Caitanya, I was very happy to receive a punishment similar to that awarded Śrī Mukunda.

“A similar punishment was awarded to mother Śacīdevī. Who could be more fortunate than she to receive such punishment?”

Śrī Advaita Ācārya told Lord Caitanya, “I cannot understand Your transcendental pastimes. You have shown more favor to Kamalākānta than You generally show to Me.

Advaita Ācārya then said to Caitanya Mahāprabhu, “Why have You called back this man and allowed him to see You? He has cheated Me in two ways.”

When Caitanya Mahāprabhu heard this, His mind was satisfied. Only They could understand each other’s minds.

Lord Caitanya Mahāprabhu instructed Kamalākānta, “You are a bāuliyā, one who does not know things as they are. Why do you act in this way? Why do you invade the privacy of Advaita Ācārya and damage His religious principles?

“Advaita Ācārya, My spiritual master, should never accept charity from rich men or kings, because if a spiritual master accepts money or grains from such materialists his mind becomes polluted.

“When one’s mind is polluted, it is very difficult to remember Kṛṣṇa, and when remembrance of Lord Kṛṣṇa is hampered, one’s life is unproductive.

“Thus one becomes unpopular in the eyes of the people in general, for this damages his religiosity and fame. A Vaiṣṇava, especially one who acts as a spiritual master, must not act in such a way. One should always be conscious of this fact.”

When Caitanya Mahāprabhu gave this instruction to Kamalākānta, all present considered it to be meant for everyone. Thus Advaita Ācārya was greatly pleased.

In this statement there are many confidential considerations. I do not write of them all, fearing an unnecessary increase in the volume of the book.

The fifth branch of Advaita Ācārya was Śrī Yadunandana Ācārya, who had so many branches and subbranches that it is impossible to write of them.

Śrī Yadunandana Ācārya was a student of Vāsudeva Datta, and he received all his mercy. Therefore he could accept Lord Caitanya’s lotus feet, from all angles of vision, as the supreme shelter.

Vijaya Paṇḍita and Śrīrāma Paṇḍita were two important branches of Advaita Ācārya. There are innumerable branches, but I am unable to mention them all.

The Advaita Ācārya branch received the water supplied by the original gardener, Śrī Caitanya Mahāprabhu. In this way, the subbranches were nourished, and their fruits and flowers grew luxuriantly.

After the disappearance of Lord Caitanya Mahāprabhu, some of the branches, for unfortunate reasons, deviated from His path.

Thus Lord Caitanya did not sprinkle upon them the water of His mercy, and they gradually withered and died.

A person without Kṛṣṇa consciousness is no better than dry wood or a dead body. He is understood to be dead while living, and after death he is punishable by Yamarāja.

Not only the misguided descendants of Advaita Ācārya but anyone who is against the cult of Śrī Caitanya Mahāprabhu should be considered an atheist subject to be punished by Yamarāja.

Be he a learned scholar, a great ascetic, a successful householder or a famous sannyāsī, one who is against the cult of Śrī Caitanya Mahāprabhu is destined to suffer the punishment meted out by Yamarāja.

The descendants of Advaita Ācārya who accepted the path of Śrī Acyutānanda were all great devotees.

By the mercy of Advaita Ācārya, the devotees who strictly followed the path of Caitanya Mahāprabhu attained the shelter of Lord Caitanya’s lotus feet without difficulty.

It should be concluded, therefore, that the path of Acyutānanda is the essence of spiritual life. Those who did not follow this path simply scattered.

I therefore offer my respectful obeisances millions of times to Acyutānanda’s actual followers, whose life and soul was Śrī Caitanya Mahāprabhu.

After describing the branches and subbranches of Advaita Ācārya, I shall now attempt to describe some of the descendants of Śrī Gadādhara Paṇḍita, the most important among the branches.

The fifth branch was Ananta Ācārya; the sixth, Kavi Datta; the seventh, Nayana Miśra; the eighth, Gaṅgāmantrī; the ninth, Māmu Ṭhākura; and the tenth, Kaṇṭhābharaṇa.

The eleventh branch of Gadādhara Gosvāmī was Bhūgarbha Gosāñi, and the twelfth was Bhāgavata dāsa. Both of them went to Vṛndāvana and resided there for life.

The thirteenth branch was Vāṇīnātha Brahmacārī, and the fourteenth was Vallabha-caitanya dāsa. Both of these great personalities were always filled with love of Kṛṣṇa.

The fifteenth branch was Śrīnātha Cakravartī; the sixteenth, Uddhava; the seventeenth, Jitāmitra; and the eighteenth, Jagannātha dāsa.

The twenty-eighth branch was Amogha Paṇḍita; the twenty-ninth, Hastigopāla; the thirtieth, Caitanya-vallabha; the thirty-first, Yadu Gāṅguli; and the thirty-second, Maṅgala Vaiṣṇava.

Śivānanda Cakravartī, the thirty-third branch, who always lived in Vṛndāvana with firm conviction, is considered an important branch of Gadādhara Paṇḍita.

Thus I have briefly described the branches and subbranches of Gadādhara Paṇḍita. There are still many more that I have not mentioned here.

All the followers of Gadādhara Paṇḍita are considered great devotees because they have Lord Śrī Caitanya Mahāprabhu as their life and soul.

Simply by remembering the names of all these branches and subbranches of the three trunks I have described [Nityānanda, Advaita and Gadādhara], one attains freedom from the entanglement of material existence.

Therefore, offering my obeisances at the lotus feet of them all, I shall describe the pastimes of the gardener, Śrī Caitanya Mahāprabhu, in chronological order.

The ocean of the pastimes of Lord Caitanya Mahāprabhu is immeasurable and unfathomable. Who can have the courage to measure that great ocean?

It is not possible to dip into that great ocean, but its sweet mellow fragrance attracts my mind. I therefore stand on the shore of that ocean to try to taste but a drop of it.

Praying at the lotus feet of Śrī Rūpa and Śrī Raghunātha, always desiring their mercy, I, Kṛṣṇadāsa, narrate Śrī Caitanya-caritāmṛta, following in their footsteps.