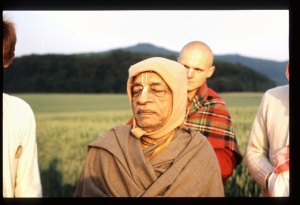 Reporter (1): That because the United States is so materialistic, the message of . . .

Reporter (1): . . . anti-materialism is more easily accepted than in places where things are not so?

Prabhupāda: That is also another cause, because they are not satisfied. Otherwise, why hippies are coming? (aside) Come. The hippies are dissatisfied with the method of modern materialistic way of life. Is it not? Therefore voluntarily . . .

Reporter (1): Yes. They have given away their possessions and . . .

Prabhupāda: Voluntarily they are giving up possessions. (someone enters) Sit down.

Sri Govinda: There is a reporter from the Chicago Daily News.

Reporter (1): . . . Krsna consciousness people among the hippies, because they had already given up material possessions, and so they were prepared for . . .?

Prabhupāda: No, that means that they want to have something new, but they are not accepting what is actually better. Some of them are accepting. But there is frustration, there is no doubt.

Prabhupāda: Yes. This way of, materialistic way of life, like their fathers, grandfathers, they do not like. Is it not? Huh?

Prabhupāda: I am . . . I am the guru of the richest country. Why shall I not have car? Do you follow?

Woman Reporter: No, I don’t. (laughter)

Prabhupāda: If I am guru of the richest country, then why shall I not have a car?

Prabhupāda: I have many. In each center I have got at least one dozen cars. (laughter) Just now I am coming from Europe—Germany. They have got nineteen vans. Nineteen. They go interior villages. The Volkswagen? What is called?

Prabhupāda: So our devotees, they are packed up in each bus, and they go interior, in the village. Similarly, in every center we have got. In Germany, in England, in Los Angeles, in New York. Here also?

Woman Reporter: Some spiritual leaders of, of various groups live in great richness, with a chauffeur, and, uh, uh, expensive cars and boats . . .

Woman Reporter: What about you?

Prabhupāda: That because I know you are envious, therefore I don’t sit here, I am sitting here. (laughter) You are very envious when a spiritual master is honored very nicely by his disciples. You become envious. What can be done? But that is the etiquette, that spiritual master is honored as good as God. But if you, you do not know, you become envious, "Why this man is sitting in this position, in this gorgeous way. Why he . . .?" What can be done?

Woman Reporter: Are you honored as good as God?

Devotee (1): Śrīla Prabhupāda is the most exalted person walking on the earth. So he must be honored in the highest fashion.

Prabhupāda: No. That is the injunction, yasya prasādād dharitvena. What is that verse?

"A spiritual master should be honored as good as God." That is the injunction of the scripture. And people who are aware of this thing, they honor. (break)

Prabhupāda: That's a great, hmm, mystery. I was not thinking myself that, "I am fit now to go there."

Prabhupāda: I was thinking that, "At present, I am not fit." And besides that, I was family man at that time. I could not get the opportunity. So after renouncing the family life—then. I renounced family life in 1954.

Woman Reporter: What happened to your wife?

Prabhupāda: Oh, I leave under the, her children, that's all.

Devotee (1): The eldest son takes care of the wife, the mother. A very nice system. (end)