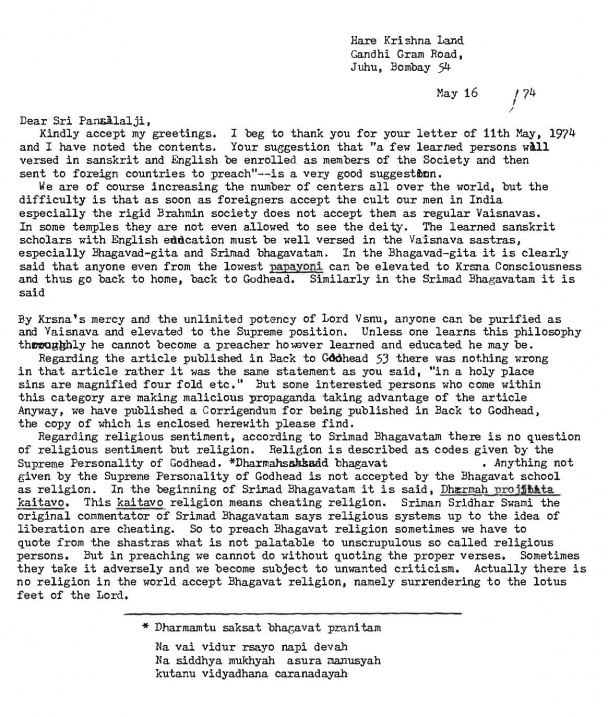 Letter to Sri Pannalalji (Page 1 of 2) 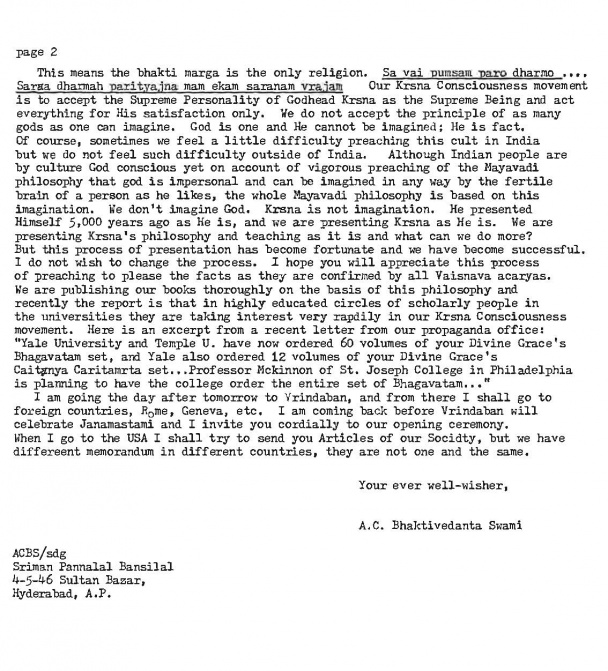 Letter to Sri Pannalalji (Page 2 of 2)

Dear Sri Pannalalji,
Kindly accept my greetings. I beg to thank you for your letter of 11th May, 1974 and I have noted the contents. Your suggestion that "a few learned persons well versed in sanskrit and English be enrolled as members of the Society and then sent to foreign countries to preach"--is a very good suggestion.
We are of course increasing the number of centers all over the world, but the difficulty is that as soon as foreigners accept the cult our men in India especially the rigid Brahmin society does not accept them as regular Vaisnavas. In some temples they are not even allowed to see the deity. The learned sanskrit scholars with English education must be well versed in the Vaisnava sastras, especially Bhagavad-gita and Srimad bhagavatam. In the Bhagavad-gita it is clearly said that anyone even from the lowest papayoni can be elevated to Krsna Consciousness and thus go back to home, back to Godhead. Similarly in the Srimad-Bhagavatam it is said

By Krsna's mercy and the unlimited potency of Lord Visnu, anyone can be purified as and Vaisnava and elevated to the Supreme position. Unless one learns this philosophy thoroughly he cannot become a preacher however learned and educated he may be.
Regarding the article published in Back to Godhead 53 there was nothing wrong in that article rather it was the same statement as you said, "in a holy place sins are magnified four fold etc." But some interested persons who come within this category are making malicious propaganda taking advantage of the article. Anyway, we have published a Corrigendum for being published in Back to Godhead, the copy of which is enclosed herewith please find.
Regarding religious sentiment, according to Srimad-Bhagavatam there is no question of religious sentiment but religion. Religion is described as codes given by the Supreme Personality of Godhead.* Dharmah sakshad bhagavat. Anything not given by the Supreme Personality of Godhead is not accepted by the Bhagavat school as religion. In the beginning of Srimad-Bhagavatam it is said, Dharmah projita kaitavo. This kaitavo religion means cheating religion. Sriman Sridhar Swami the original commentator of Srimad Bhagavatam says religious systems up to the idea of liberation are cheating. So to preach Bhagavat religion sometimes we have to quote from the shastras what is not palatable to unscrupulous so called religious persons. But in preaching we cannot do without quoting the proper verses. Sometime they take it adversely and we become subject to unwanted criticism. Actually there is no religion in the world accept Bhagavat religion, namely surrendering to the lotus feet of the Lord.

This means the bhakti marga is the only religion. Sa vai pumsam paro dharmo .... (SB 1.2.6). Sarva dharman parityajya mam ekam saranam vraja (BG 18.66). Our Krsna Consciousness movement is to accept the Supreme Personality of Godhead Krsna as the Supreme Being and act everything for His satisfaction only. We do not accept the principle of as many gods as one can imagine. God is one and He cannot be imagined; He is fact. Of course, sometimes we feel a little difficulty preaching this cult in India but we do not feel such difficulty outside of India. Although Indian people are by culture God conscious yet on account of vigorous preaching of the Mayavadi philosophy that god is impersonal and can be imagined in anyway by the fertile brain of a person as he likes, the whole Mayavadi philosophy is based on this imagination. We don't imagine God. Krsna is not imagination. He presented Himself 5,000 years ago as He is, and we are presenting Krsna as He is. We are presenting Krsna's philosophy and teaching as it is and what can we do more? But this process of presentation has become fortunate and we have become successful. I do not wish to change the process. I hope you will appreciate this process of preaching to please the facts as they are confirmed by all Vaisnava acaryas. We are publishing our books thoroughly on the basis of this philosophy and recently the report is that in highly educated circles of scholarly people in the universities they are taking interest very rapidly in our Krsna Consciousness movement. Here is an excerpt from a recent letter from our propaganda office: "Yale University and Temple U. have now ordered 60 volumes of your Divine Grace's Bhagavatam set, and Yale also ordered 12 volumes of your Divine Grace's Caitanya Caritamrta set...Professor McKinnon of St. Joseph College in Philadelphia is planning to have the college order the entire set of Bhagavatam..."
I am going the day after tomorrow to Vrndaban, and from there I shall go to foreign countries, Rome, Geneva, etc. I am coming back before Vrindaban will celebrate Janmastami and I invite you cordially to our opening ceremony. When I go to the USA I shall try to send you Articles of our Society, but we have different memorandum in different countries, they are not one and the same.