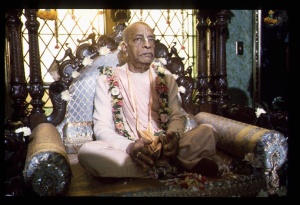 Prabhupāda: . . . feverish. But these people, they take bhakti as a means of liberation. That is their mistake.

Dr. Patel: That is their mistake.

Dr. Patel: That is where we were quarreling very often.

Prabhupāda: Yes. We have now made a conclusion not to fight.

Prabhupāda: Otherwise he can become a Jamadagna.

Dr. Patel: Who asked Paraśurāma to fill his bowl up.

Prabhupāda: No, I mean to say Jamadagna.

Prabhupāda: Yes. (break) . . . being done in America because it is not to be done here. Here religion has become fanaticism and political degradation. It is not possible. Now see in our political paper how they are seriously doing and people taking seriously. Whatever program I give them, they are systematically do it. Here there is no assistance.

Prabhupāda: That is government: no responsibility.

Prabhupāda: . . . kriyā hīnā. These governments are not . . . they are not reformed, and they have taken the post of government. Nobody can do.

Prabhupāda: Yes, so that others may hear. (break) . . . you simply present the card anywhere—you get things. You don't require to pay. Then your bills will be paid by the bank. This is the system.

Prabhupāda: . . . Bank of American card, in any American, Bank of America, I can get one hundred to five hundred dollars immediately. I have got that card. (break) . . . the respectable customers . . .

Prabhupāda: Yes. (break) . . . money, then you can squander it, and that is the idea. And you more spend money, then they manufacture consumer goods. That is the policy.

Prabhupāda: (indistinct) . . . ṣad says, tena tyaktena bhuñjīthā (ISO 1): "Don't use anything more than what is allotted to you." That's all. But they are creating artificial demand, and the demand is being paid for by artificial paper. The government is issuing, "This is five hundred pounds" or "Five hundred rupees," but it is paper only. Actually it is cheating. But we are satisfied. (break) . . . said: "In God we trust." That's all. "In God we trust." What is that?

Prabhupāda: Yes. Because I am giving you this paper—I am cheating you—therefore I am "In God we trust."

Prabhupāda: And the best in the world. That is a fact.

Dr. Patel: They have given, fathers, by their forefathers.

Dr. Patel: And the nightclubs.

Prabhupāda: Yes. Naked woman, that's all. Both sides it is there. They advertise. Here . . . yes. In America, anywhere you deposit forty dollars. Next day you get everything. (break) . . . they say: "This year it is now reduced." Mean "Criminality, let go on, but from the last year, this year it is now reduced." That's all. (break) ". . . are drinking. Therefore you cannot call me drunkard." This is the logic.

Prabhupāda: These rogues and thieves will increase. That is the law of nature.

Dr. Patel: Same thing used to happen in India when the king was being . . .

Prabhupāda: That's all. My things were stolen from my apartment in the beginning, so I went to the police. They simply noted down, that's all. (break) . . . you can narrate the incidents when the Negro at San Francisco . . .

Prabhupāda: Yes. Kṣatriya, this is all finished. Now only śūdras and little vaiśyas there are.

Dr. Patel: No, here, here you have got also brāhmaṇas.

Dr. Patel: But they don't follow them. Nobody follows them.

Dr. Patel: Mr. Ford is going to be the president now. (break)

Prabhupāda: . . . of safety and security. During Mahārāja Yudhiṣṭhira's reign there was no unnecessary disease and anxiety also. That is mentioned. You have read?

Prabhupāda: . . . some hundred years ago. When I went to Kashmir, so they said that, "Here the law was if a thief was caught and proved he has stolen, his hands would be cut off."

Dr. Patel: That is the law presently in Arabia.

Prabhupāda: Eh? Yes. (break) So at the present moment Indians means non-Muhammadans. What he is, he does not know—but he is not Muhammadan. That's all. (laughter) Otherwise he has to be . . . go to Pakistan. Therefore he's non-Muhammadan. That's all. (break) In big, big cities you cannot safely walk at night. Here, India still, we lie down in the open air. That is not possible there.

Prabhupāda: In Dallas, Dallas I wanted to lie down in the open air. "No, no, you cannot do this."

Dr. Patel: In that way Europe is better. England is far better. In England anywhere you can sleep.

Prabhupāda: No, no, England . . . England you cannot lie down on the open. No.

Prabhupāda: No, that is not possible. It is very cold.

Prabhupāda: Even in summer it is not possible.

Dr. Patel: I have seen people going and touring about . . . (break)

Girirāja: (reading) ". . . cannot safely walk a city street or sleep without fear of burglars, then the government has fallen far short of the actual standard of a legitimate administration." (break)

Prabhupāda: We are criticizing strongly in our paper.

Prabhupāda: . . . command a position. If you manufacture government like that, it will never be capable.

Girirāja: "But it's said in all authentic, revealed scriptures, wherein it is declared that the purpose of civilized human life is to live together in peace and harmony so that everyone can advance progressively in spiritual life . . ." (break)

Prabhupāda: . . . purpose of life. But they do not know what is the purpose of life. They have taken the idea as cats and dogs, simply sense gratification. Now where . . . how there will be good government? (break) . . . all leniency to the Muhammadans to get vote. That's a fact.

Dr. Patel: That woman has played the havoc with this. (break)

Prabhupāda: Yes. I mean to say, Mahābhārata, anywhere, or Rāmāyaṇa, you'll never find a woman is elected on the topmost post.

Dr. Patel: And the widow with all her virtues.

Girirāja: ". . . pursuit of human culture are not possible. The government, by being weak and impotent, has thus failed to maintain the standard of civilized culture."

Prabhupāda: Yes. Everywhere. Simply rogues. They want money, that's all. They do not want anything.

Prabhupāda: Rāma-rājya was not democracy.

Dr. Patel: No, it was a sort of democracy because it happened that His wife, on seeing ordinary menials . . .

Prabhupāda: Why king should be under any criticism?

Dr. Patel: That is the responsibility of the king, ruling. (breaks)

Prabhupāda: (indistinct) . . .There is a jalebi seller. He is the medium of bribing police. He has got ten lakhs of rupees, ordinary jalebi seller. (break)

Girirāja: "Yet even in places where the police get good scores for solving crime and apprehending law-breakers, the crime rate remains high." (break)

Prabhupāda: When we were children, there was a respectable gentleman, Mullik's family. He was agent of taking bribe on behalf of . . . (break) . . . all of them have their . . . Los Angeles. The same thing I am talking.

Dr. Patel: So you will have them, all the photos from here also. (break)

Prabhupāda: . . . said, anardhena nyāya-rahitam: "If you have no money, then you'll never get justice." Dalmia, he was imprisoned for two years.

Dr. Patel: He was never in the jail. I know.

Prabhupāda: He was in the Delhi Hospital. (break) Was speaking so loudly real thing. Here you cannot. Immediately you'll be in the black book. (break)

Girirāja: ". . . must go unpunished. This is itself the business of criminal and lawless men who have no knowledge what it means to protect the citizens under their charge." (break)

(break) Because people are becoming degraded, so they elect such degraded everything. (break)

Dr. Patel: That means actually he is a thief. That's right.

Girirāja: There's a saying that when you throw a stone in a pack of dogs, the one who is hit will scream. (break)

Prabhupāda: Others also, followers. These ordinary, so-called gosvāmīs in Vṛndāvana, in the outwardly in religious dress, and inwardly they are committing so many sinful activities, they will become the dogs and hogs and monkeys in Vṛndāvana. So one gosvāmī, he has taken very much objection to this writing, and he is making propaganda against me like anything. There was arrangement of reception. He stopped it. (break) That I have also written, that now, after finishing the sinful reaction, these monkeys and dogs will be liberated. That I have also written . . . (indistinct) . . . (break)

Prabhupāda: . . . one has passed stool, and during daytime, due to the sunshine, the upper side is dry. So if somebody says: "This side is better than the other side. The moist side is not so good. The dry side is good."

Prabhupāda: . . . gentlemen. Nation, you'll find . . . (indistinct) . . . gentlemen, but they do not know that these things are criminals. They think it is ordinary thing, illicit sex, meat-eating, intoxication.

Prabhupāda: Yes. They say it is ordinary necessities. (break) Therefore we call mūḍhās. They do not know what is what.

Dr. Patel: Bhaktivedanta has formed a canal to take the spiritual India.

That this is business. Not that pṛthivī loka will come. You have to go and preach.

Indian man (1): That is the purpose and duty of the saints who have already realized . . .

Yes, that is India's duty.

Prabhupāda: . . . nonsense, that sitting at, very comfortably at Haridvara. (break) . . . says, everything . . . Īśāvāsyam idaṁ . . . everything has got control of the Supreme. Īśāvāsyam idaṁ sarvam (ISO 1). How you can say it is material when it is . . . it can be used . . . there is another verse. What is called? Prapañcikatayā buddhyā hari-sambandha-vastunaḥ. Everything has got relation with the Supreme because it is a production of the supreme energy. So everything is connected. So:

If we do not take everything in that relation that, "Everything belongs to Kṛṣṇa. Everything has got relationship with Kṛṣṇa," and if we simply give it up, "Oh, this is material. This is material . . ."

Prabhupāda: . . . has got relation of Kṛṣṇa. Therefore everything should be dovetailed in the service of Kṛṣṇa. And that is real understanding.

Girirāja: "Nowhere in the Newsweek article is the quackery of these signs . . ."

Girirāja: "This allegation, however, betrays such a profound lack of knowledge that the so-called svāmī sounds more like one who is learned at Hinduism at New York University than an authentic scholar of the Vedas." (break) "Supreme Brahman, the ultimate . . ." (break) (end)