730109 - Letter to Damodara written from Bombay 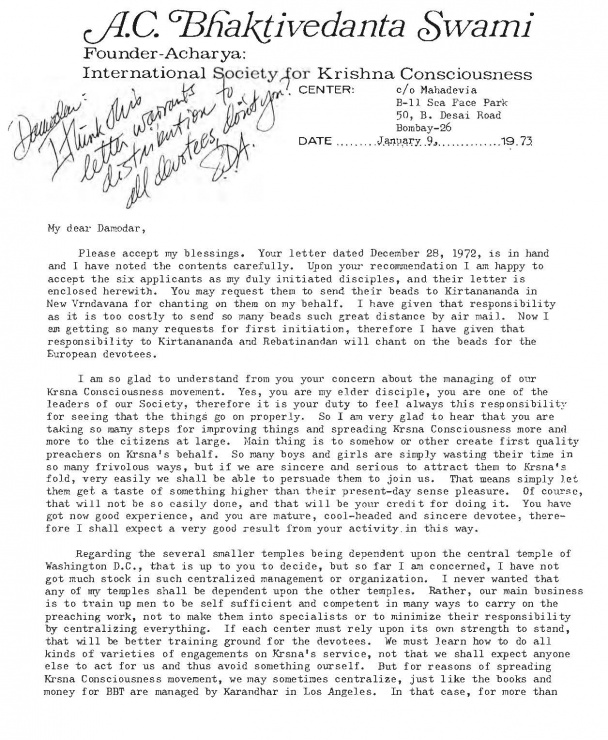 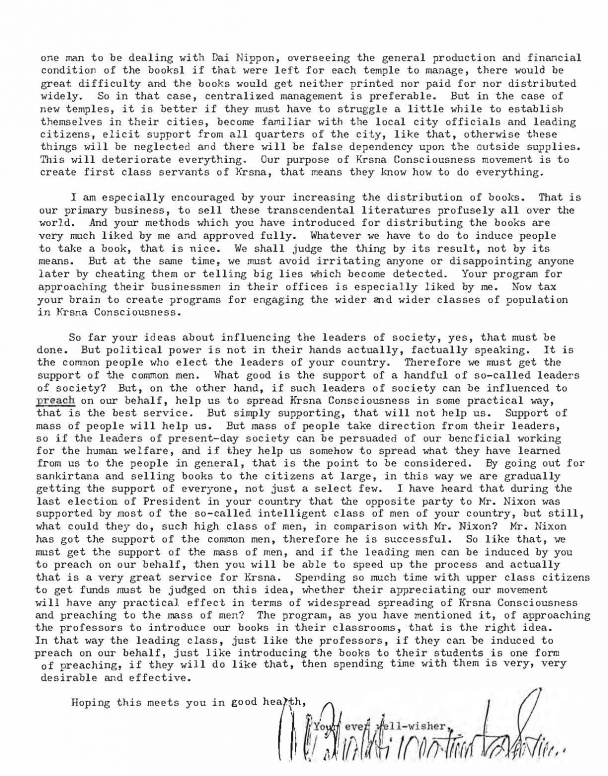 Damoder: I think this letter warrants distribution to all devotees, don't you?
SDA [handwritten]

Please accept my blessings. Your letter dated December 28, 1972 is in hand and I have noted the contents carefully. Upon your recommendation I am happy to accept the six applicants as my duly initiated disciples, and their letter is enclosed herewith. You may request them to send their beads to Kirtanananda in New Vrndavana for chanting on them on my behalf. I have given that responsibility as it is too costly to send so many beads such great distance by air mail. Now I am getting so many requests for first initiation, therefore I have given that responsibility to Kirtanananda, and Rebatinandan will chant on the beads for the European devotees.

I am so glad to understand from you your concern about the managing of our Krsna Consciousness movement. Yes, you are my elder disciple, you are one of the leaders of our Society; therefore, it is your duty to feel always this responsibility for seeing that the things go on properly. So I am very glad to hear that you are taking so many steps for improving things and spreading Krsna Consciousness more and more to the citizens at large. Main thing is to somehow or other create first quality preachers on Krsna's behalf. So many boys and girls are simply wasting their time in so many frivolous ways, but if we are sincere and serious to attract them to Krsna's fold, very easily we shall be able to persuade them to join us. That means simply let them get a taste of something higher than their present-day sense pleasure. Of course, that will not be so easily done, and that will be your credit for doing it. You have got now good experience, and you are mature, cool-headed and sincere devotee, therefore, I shall expect a very good result from your activity in this way.

Regarding the several smaller temples being dependent upon the central temple of Washington D.C., that is up to you to decide, but so far I am concerned, I have not got much stock in such centralized management or organization. I never wanted that any of my temples shall be dependent upon the other temples. Rather, our main business is to train up men to be self sufficient and competent in many ways to carry on the preaching work, not to make them into specialists or to minimize their responsibility by centralizing everything. If each center must rely upon its own strength to stand, that will be better training ground for the devotees. We must learn how to do all kinds of varieties of engagements on Krsna's service, not that we shall expect anyone else to act for us and thus avoid something ourselves. But for reasons of spreading Krsna Consciousness movement, we may sometimes centralize, just like the books and money for BBT are managed by Karandhar in Los Angles. In that case, for more than one man to be dealing with Dai Nippon, overseeing the general production and financial condition of the books, if that were left for each temple to manage, there would be great difficulty and the books would get neither printed nor paid for nor distributed widely. So in that case, centralized management is preferable. But in the case of new temples, it is better if they must have to struggle a little while to establish themselves in their cities, become familiar with the local city officials and leading citizens, elicit support from all quarters of the city, like that, otherwise these things will be neglected and there will be false dependency upon the outside supplies. This will deteriorate everything. Our purpose of Krsna consciousness movement is to create first class servants of Krsna, that means they know how to do everything.

I am especially encouraged by your increasing the distribution of books. That is our primary business, to sell these transcendental literatures profusely all over the world. And your methods which you have introduced for distributing the books are very much liked by me and approved fully. Whatever we have to do to induce people to take a book, that is nice. We shall judge the thing by its result, not by its means. But at the same time, we must avoid irritating anyone or disappointing anyone later by cheating them or telling big lies which become detected. Your program for approaching their businessmen in their offices is especially liked by me. Now tax your brain to create programs for engaging the wider and wider classes of population in Krsna Consciousness.

So far your ideas about influencing the leaders of society, yes, that must be done. But political power is not in their hands actually, factually speaking. It is the common people who elect the leaders of your country. Therefore we must get the support of the common men. What good is the support of a handful of so-called leaders of society? But, on the other hand, if such leaders of society can be influenced to preach on our behalf, help us to spread Krsna Consciousness in some practical way, that is the best service. But simply supporting, that will not help us. Support of mass of people will help us. But mass of people take direction from their leaders, so if the leaders of present-day society can be persuaded of our beneficial working for the human welfare, and if they help us somehow to spread what they have learned from us to the people in general, that is the point to be considered. By going out for sankirtana and selling books to the citizens at large, in this way we are gradually getting the support of everyone, not just a select few. I have heard that during the last election of President in your country that the opposite party to Mr. Nixon was supported by most of the so-called intelligent class of men of your country, but still, what could they do, such high class of men, in comparison with Mr. Nixon? Mr. Nixon has got the support of the common men, therefore he is successful. So life that, we must get the support of the mass of men, and if the leading men can be induced by you to preach on our behalf, then you will be able to speed up the process and actually that is a very great service for Krsna. Spending so much time with upper class citizens to get funds must be judged on this idea, whether their appreciating our movement will have any practical effect in terms of widespread spreading of Krsna Consciousness and preaching to the mass of men? The program, as you have mentioned it, of approaching the professors to introduce our books in their classrooms, that is the right idea. In that way the leading class, just like the professors, if they can be induced to preach on our behalf, just like introducing the books to their students is one form of preaching, if they will do like that, then spending time with them is very, very desirable and effective.