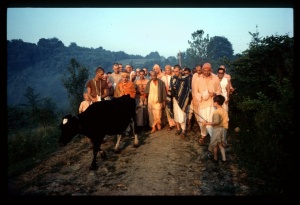 Pradyumna: . . . lation: "O brāhmins, the ninth incarnation of the Lord, prayed for by sages, was King Pṛthu, who cultivated the land to yield various produces, and for that reason the earth was beautiful and attractive." (SB 1.3.14)

Prabhupāda: So this refers to King Pṛthu, Mahārāja Pṛthu. So his father's name was King Veṇa. And his father's name was . . . I don't remember. Perhaps Aṅga, like that. So the Veṇa's father married one woman, she was the daughter of Death; means the family was not very good. So as a result of this marriage, a son was born whose name was Veṇa, who came out to be first-class rogue.

So the father of Veṇa wanted to reform him in so many ways, but he could not. The son was not to be corrected. So the father became disgusted, and one day he left home without any knowledge of the family members or the officers and king. He left.

Then the great sages and brāhmins, because without king there was irregularities in the kingdom . . . just like we have got experience: if there is no good government, strong government, the rogues, thieves, smugglers and so many other disrupting elements, they will grow. Because they are always existing.

They find out the opportunity. As soon as there is some revolution, political upsurge, or mismanagement of the government, these undesirable elements, they come out. So when the father of Veṇa Mahārāja left home, the kingdom became unruly. Therefore the sages and saintly persons, they asked the queen that, "Your son, although he is worthless, so let him become king. There must be some king."

So this Veṇa was made king by the desire of the saintly person. The significance is that formerly the brāhmins, the kṣatriyas, the vaiśyas and the śūdras, these four departments, they must remain. Varṇāśrama. That must be maintained, class division. So the brāhmins, the saintly persons, sages, they used to recommend that, "Yes, this person is fit for becoming king." Then the coronation was celebrated. Or . . . this means that the kṣatriyas were under the order of the brāhmins.

This is our experience. "Might is right." If you are stronger, then you can subdue less strong. But he became very much disturbing. He was atheist, and he ordered that "There is no God. I am God. So what I say, you have to abide." The brāhmins were also . . . "You cannot perform yajñas. This is not required." In this way, he became too much disturbing.

Then one day all the brāhmins and the sages, they came to give him instruction, "My dear king, it is not your duty to stop all kinds of religious activities." Just like the Communist government. Yes. But who hears? He said: "No. Why you are trying to pacify God? I am God. You just act. If you are actually God conscious, then you act according to my order." So when the sages and brāhmins became disgusted, he was killed by the brāhmins, by their order. You see? The brāhmins were so strong, by simply cursing, they could kill anyone.

So the Veṇa was killed. Then again the rogues and thieves came out. Then from the body of Veṇa, they created two sons. One son was black, and he was ordered that "You go to the forest." Because they could know that he is exactly son of the father. Niṣāda. Niṣāda. They were sent . . . he was sent to the forest. And then the King Pṛthu was born. The King Pṛthu, He is incarnation of . . . power incarnation of God, śaktyāveśāvatāra. So he proved himself as a great king on this earth. He produced foodstuff, food grains, profusely. That from the life of King Pṛthu we can understand.

We are discussing that in the Fourth Canto, the life of Mahārāja Pṛthu, how good government can be maintained. Pṛthu Mahārāja is the ideal king. He produced . . . he made arrangement. The earth was not producing sufficient food grains, so he attacked the earth that, "Why you are not producing?" The mother earth said that, "Because the people have become demon and they are simply eating, but they are not doing their duty; therefore I have minimized producing grain."

By nature, there is arrangement, foodstuff. The cows, the other animals, they are eating grass. There is profuse growth of grass. So they are not eating your nice foodstuff, sandeśa, rasagullā. You are making sandeśa, rasagullā from the milk which they deliver. They are eating grass and delivering you nice foodstuff, milk. And from the milk, you can make hundreds and thousands of nice, nutritious, full of vitamin foodstuff. But no. We are so fool that instead of utilizing the milk, we are utilizing the blood. You see?

These rascals, the scientists, they do not know that milk is nothing but transformation of the blood. That everyone knows. So if you want to . . . that is nature's way, by God's will, that a cow gives forty pounds, fifty pounds milk daily, but it does not drink. Although it is her milk, no, it gives you, human society: "You take. But don't kill me. Let me live. I am eating only grass."

Just see. And the civilized men killing them. Killing them. And they want peace. Just see the fun. Without touching your foodstuff, the cow is eating the grass which is given by God, immense grass, and they are giving you the finest foodstuff, milk. Just after your birth you have only to drink milk, either mother's milk . . . nowadays, mothers do not supply milk. That is also to be supplied by the cow.

So from the very beginning of my life I am subsisting by the foodstuff given by mother, cow, and when I am grown up, I kill. This is my gratitude. Just see. And they are called civilized. Less than lowest animal, narādhama. They are called narādhama, lowest of the mankind. Those who are killing cows, maintaining slaughterhouse, they are lowest of the mankind. They are not human being. Less than animal. They have no gratitude.

So the idea is that there is no food problem. As the mother earth said to King Pṛthu that, "I am restricting," so the more you become sinful, the food supply will be stopped. This is the law of nature. At the end there will be no food grains, at the end of Kali-yuga. That is stated in the Śrīmad-Bhāgavatam.

There will be no food grain, no fruits, no milk, no sugar. You have to live on flesh and blood. At that time, being hungry, you will kill your own children and eat flesh and blood. That day is waiting. So this is the civilization. Most heinous civilization. It can only be saved by spreading this Kṛṣṇa consciousness movement. Otherwise there is no way. So sinful civilization.

Therefore our first restriction is no meat-eating. It is a most sinful act. Meat-eating or intoxication, drinking, gambling and illicit sex. These are the four pillars of sinful life. So unless you stop, you break these four pillars, how you can think of God? God is not so cheap. The rascal says: "You can do whatever you like. I give you . . . I push your eyes and you become . . . you see God. You push your nose, you see God." You see? These nonsense things are going on.

But God is not so cheap. He is cheap, very cheap. He is very kind. But we want to remain sinful. Therefore we cannot see God. Arjuna addressed Kṛṣṇa, paraṁ dhāma paraṁ brahma pavitraṁ paramaṁ bhavān (BG 10.12): "You are the most pure." So how you can approach God with sinful life? That is not possible. That is simply bogus thing, that you keep your sinful life, at the same time you want to see God, you want to talk with God. That is not possible.

So this point is that if the population of the world becomes sinful, demonic, then nature will not supply you sufficient food. She will diminish. We have got experience. In India we have seen, some years there is overproduction of mango. People . . . very cheap. Everyone can purchase. And sometimes there is no supply, some year.

Similarly, food grains also. Some year there is oversupply of food grain, and sometimes there is scanty supply. Now, this supply of food grains, fruits and everything, even milk . . . in our New Vrindavan, because the cows feel very safe, they give us sufficient milk. That is our experience.

So you keep things in order according to the Vedic injunction, you get sufficient food. There is no question of scarcity. But if you become sinful, demons, then the nature's food supply will be ultimately stopped. You can produce your food in the factory . . . you cannot do that.

You can produce motorcars to consume all the petroleum within the earth, and then you become no petrol. Then throw all these motorcars. Unless you find out some other energy. That you can do. You can make things topsy-turvied. But by your so-called scientific advancement, you cannot increase or, I mean to say, stop nonproduction. That you cannot.

So there was such a time, because Pṛthu Mahārāja's father was a demon, he stopped all religious activities. Therefore people became demonic, and there was restriction of food supply. Then Pṛthu Mahārāja made arrangement, and there was sufficient foodstuff. Dugdhemām oṣadhīr viprās tenāyaṁ sa uśattamaḥ. Since Pṛthu Mahārāja arranged the whole society to be religious, to be God conscious, everything become beautiful. This can be done even now. If people become Kṛṣṇa conscious, the whole world will become beautiful, Vaikuṇṭha, without any anxiety. That is possible. Because that is nature's law.

Just like if you become criminal, the state police force will always harass you. You cannot get out of it. He'll harass you. But that is expensive job for the government, because it requires extra police, extra management, extra everything. But if the people become honest, God conscious, so many expenditure will be reduced. And money will be saved for spreading Kṛṣṇa consciousness or for Kṛṣṇa's service. Then the whole world will become exactly as it was in the Pṛthu Mahārāja's day.

So Pṛthu Mahārāja was very nice king. He not only helped producing enough foodstuff, but he was examining each man whether he is employed or not. There was no unemployment in Pṛthu Mahārāja's time. Everyone must have employment, engagement. Nowadays, in spite of so much advancement of science, there are thousands and thousands of unemployed people. They have no sufficient engagement.

The brāhmins are rejected in the present society because they have no more interest in religious activities. They don't care for the śāstra, sādhu. No, don't care. They simply sense grati . . . dākṣyaṁ kuṭumba-bharaṇam (SB 12.2.6). Udaraṁ bharita. At the present moment people will be satisfied . . . just like animal. If animal has got sufficient food to fill up the belly and sufficient arrangement for sex, then he is satisfied. He doesn't want anything.

So man has become like that. If his belly is filled up with some rubbish thing and if he is free to have sex life, then he thinks, "My life is perfect now." And more perfect life, dākṣyaṁ kuṭumba-bharaṇam. In this age, if one man can maintain his wife and children, he will be considered a great man, "Oh, he is so able, that he is maintaining his wife and children."