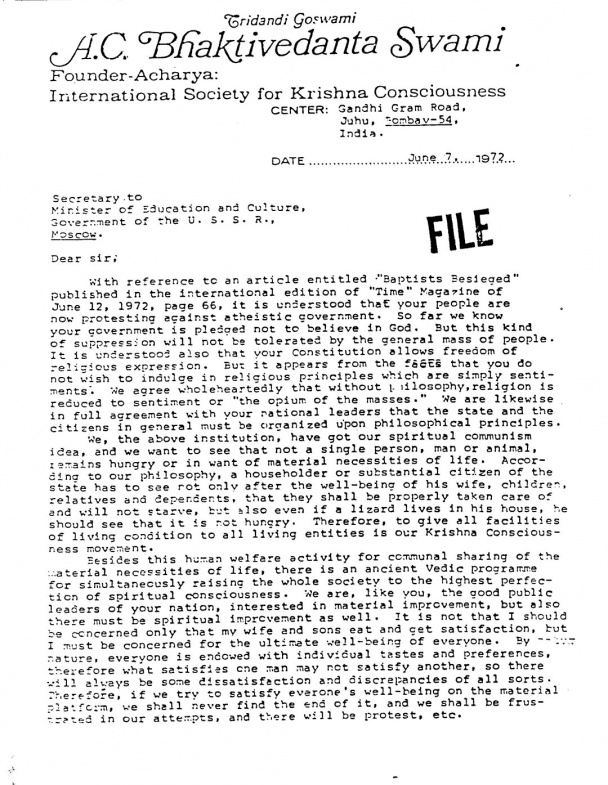 Letter to Secretary to Minister of Education and Culture, U.S.S.R (Page 1 of 2) (Page 2 Missing)

Secretary to
Minister of Education and Culture,
Government of the U. S. S. R.,
Moscow.

With reference to an article entitled "Baptists Besieged" published in the international edition of "Time" Magazine of June 12, 1972, page 66, it is understood that your people are now protesting against atheistic government. So far we know your government is pledged not to believe in God. But this kind of suppression will not be tolerated by the general mass of people. It is understood also that your Constitution allows freedom of religious expression. But it appears from the facts that you do not wish to indulge in religious principles which are simply sentiments. We agree wholeheartedly that without philosophy, religion is reduced to sentiment or "the opium of the masses." We are likewise in full agreement with your national leaders that the state and the citizens in general must be organized upon philosophical principles.
We, the above institution, have got our spiritual communism idea, and we want to see that not a single person, man or animal, remains hungry or in want of material necessities of life. According to our philosophy, a householder or substantial citizen of the state has to see not only after the well-being of his wife, children, relatives and dependents, that they shall be properly taken care of and will not starve, but also even if a lizard lives in his house, he should see that it is not hungry. Therefore, to give all facilities of living condition to all living entities is our Krishna Consciousness movement.
Besides this human welfare activity for communal sharing of the material necessities of life, there is an ancient Vedic programme for simultaneously raising the whole society to the highest perfection of spiritual consciousness. We are, like you, the good public leaders of your nation, interested in material improvement, but also there must be spiritual improvement as well. It is not that I should be concerned only that my wife and sons eat and get satisfaction, but I must be concerned for the ultimate well-being of everyone. By nature, everyone is endowed with individual tastes and preferences, therefore what satisfies one man may not satisfy another, so there will always be some dissatisfaction and discrepancies of all sorts. Therefore, if we try to satisfy everyone's well-being on the material platform, we shall never find the end of it, and we shall be frustrated in our attempts, and there will be protest, etc.

Your great founder of your nation, Mr. Nikolai Lenin, was very much intelligent, and he could understand that people become united only under the guiding principles of a commonly accepted philosophy or standard of truth. But if we examine the course of history, we must conclude, with Mr. Karl Marx, that this so-called standard of truth constantly changes, and that what one group of people accept at standard of perfection at one time, the same people may again reject that standard and take another philosophy as the all-in-all, and so on. So if we are intelligent leaders of state, it is to our advantage to benefit all the citizens by satisfying their material requirements, but even more is it our duty to satisfy their need for being secure and confident that they are working under the principles of a truth or reality which does not change and is therefore absolute. That is spiritual satisfaction. Spiritual means philosophical, otherwise it is sentiment and sentiments are fickle and always changing. So we can very much appreciate your rejection of sentiment as a basis for practical activity.

Our institution, as above mentioned, is a philosophical and cultural movement originating long ago in the Vedic period of history of your friendly neighbor, India, and it is meant for awakening peoples' dormant acceptance of the absolute truth, or God-consciousness, without which a human society is no better than animal society. By the progressive evolutionary process, the human being is enriched specifically with dormant obeisances for the supreme authority. We cannot deny logically and scientifically the supreme authority of the whole cosmic manifestation. In abnormal conditions only we deny this authority, but normally it is not possible to deny this fact.

I think your people are now protesting against this suppression, and at the same time, we can understand that your government does not wish to encourage the above-mentioned sentimental religious faiths. Our International Society is based upon scientific and authoritative understanding of God-consciousness. Any philosopher or scientist will certainly agree with our philosophical point-of-view on religion and God-consciousness.

We also understand from one prominent Soviet professor of Indology that a few years ago your government published a translation of the Ramayana, an ancient Vedic scripture describing the pastimes of Lord Rama, who advented Himself as the Supreme Personality of Godhead long years ago, and that this translation, the whole stock, was sold out within a few days. With reference to this obvious preference by the citizens in general, we wish to publish our translation of another ancient classical Vedic literature, namely, Bhagavad-gita, in the Russian language. The English edition of this great book of knowledge, which has been called by us as Bhagavad-gita As It Is, is already published by the famous London publishing house of Mss. MacMillan Co.

This book of knowledge is perfectly educational and is an authoritative cultural presentation in the matter of understanding God-consciousness. If you, therefore, permit, I can send you the copy of Bhagavad-gita As It Is and ask my publishers, MacMillan Co., to send you one copy immediately on hearing from you.

Our only desire is that when the good people of your country are so anxious to continue the natural God-consciousness, why not give them opportunity to read a book which is full of philosophy and science in the matter of developing their firm understanding of the truth or God-consciousness, and thus very easily unify and satisfy all the citizens.

Thanking you in anticipation of an early reply,