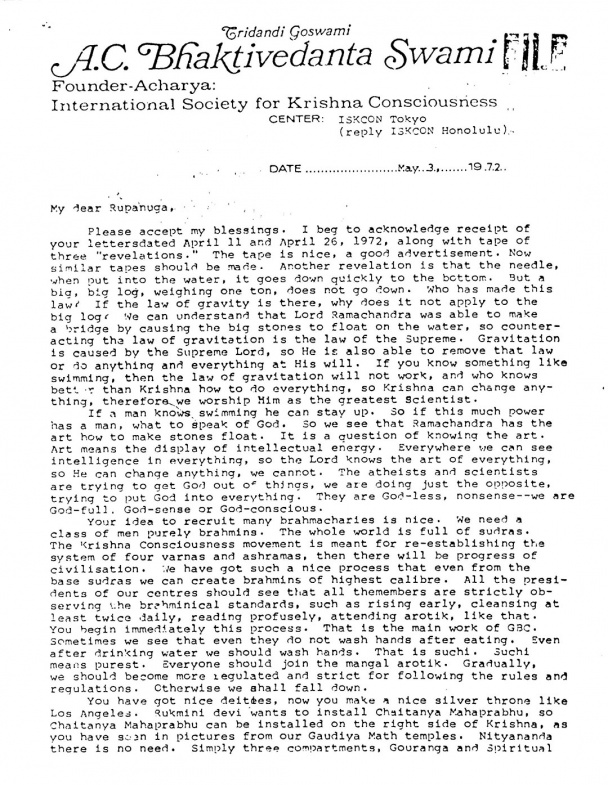 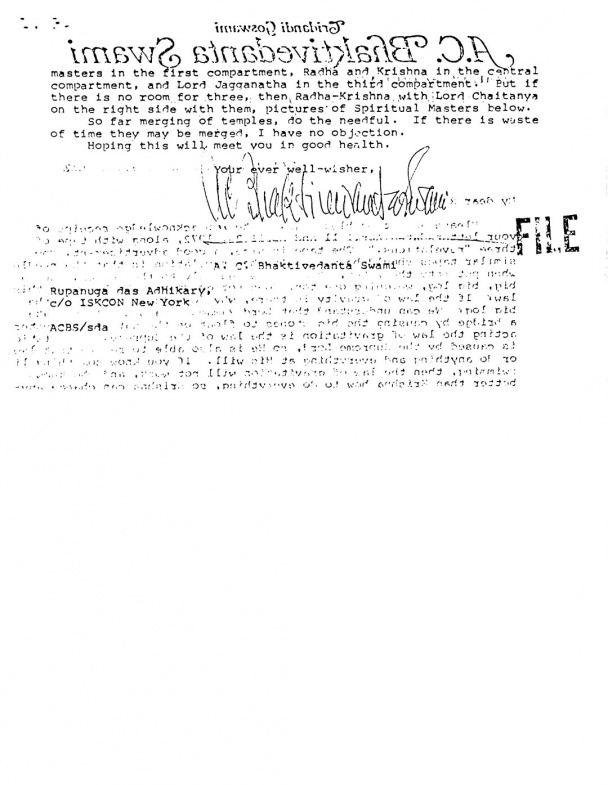 Please accept my blessings. I beg to acknowledge receipt of your letters dated April 11 and April 26, 1972, along with tape of three "revelations." The tape is nice, a good advertisement. Now similar tapes should be made. Another revelation is that the needle, when put into the water, it goes down quickly to the bottom. But a big, big log, weighing one ton, does not go down. Who has made this law? If the law of gravity is there, why does it not apply to the big log? We can understand that Lord Ramachandra was able to make a bridge by causing the big stones to float on the water, so counteracting the law of gravitation is the law of the Supreme. Gravitation is caused by the Supreme Lord, so He is also able to remove that law or do anything and everything at His will. If you know something like swimming, then the law of gravitation will not work, and who knows better than Krishna how to do everything, so Krishna can change anything, therefore we worship Him as the greatest Scientist.
If a man knows swimming he can stay up. So if this much power has a man, what to speak of God. So we see that Ramachandra has the art how to make stones float. It is a question of knowing the art. Art means the display of intellectual energy. Everywhere we can see intelligence in everything, so the Lord knows the art of everything, so He can change anything, we cannot. The atheists and scientists are trying to get God out of things, we are doing just the opposite, trying to put God into everything. They are God-less, nonsense--we are God-full, God-sense or God-conscious.
Your idea to recruit many brahmacharies is nice. We need a class of men purely brahmins. The whole world is full of sudras. The Krishna Consciousness movement is meant for re-establishing the system of four varnas and ashramas, then there will be progress of civilisation. We have got such a nice process that even from the base sudras we can create brahmins of highest calibre. All the presidents of our centers should see that all the members are strictly observing the brahminical standards, such as rising early, cleansing at least twice daily, reading profusely, attending arotik, like that. You begin immediately this process. That is the main work of GBC. Sometimes we see that even they do not wash hands after eating. Even after drinking water we should wash hands. That is suchi. Suchi means purest. Everyone should join the mangal arotik. Gradually, we should become more regulated and strict for following the rules and regulations. Otherwise we shall fall down.
You have got nice deities, now you make a nice silver throne like Los Angeles. Rukmini devi wants to install Chaitanya Mahaprabhu, so Chaitanya Mahaprabhu can be installed on the right side of Krishna, as you have seen in pictures from our Gaudiya Math temples. Nityananda there is no need. Simply three compartments, Gouranga and Spiritual masters in the first compartment, Radha and Krishna in the central compartment, and Lord Jagannath in the third compartment. But if there is no room for three, then Radha-Krishna with Lord Chaitanya on the right side with them, pictures of Spiritual Masters below.
So far merging of temples, do the needful. If there is waste of time they may be merged, I have no objection.
Hoping this will meet you in good health.