720218 - Letter to Jadurani written from Calcutta 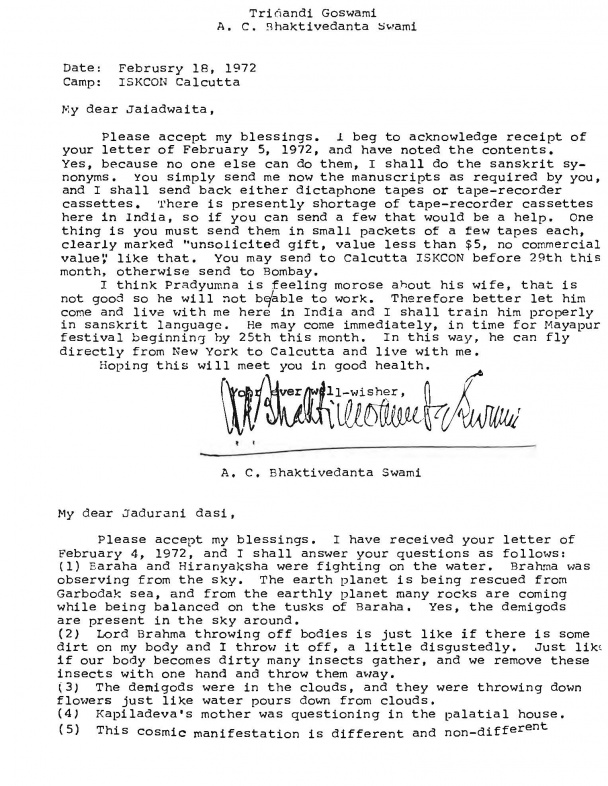 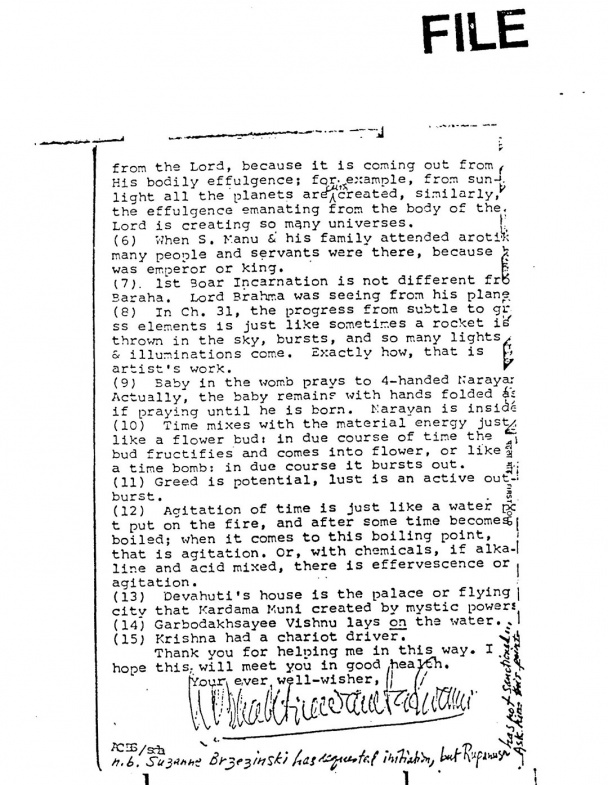 Please accept my blessings. I have received your letter of February 4, 1972, and I shall answer your questions as follows:
(1) Baraha and Hiranyaksha were fighting on the water. Brahma was observing from the sky. The earth planet is being rescued from Garbodak sea, and from the earthly planet many rocks are coming while being balanced on the tusks of Baraha. Yes, the demigods are present in the sky around.
(2) Lord Brahma throwing off bodies is just like if there is some dirt on my body and I throw it off, a little disgustedly. Just like if our body becomes dirty many insects gather, and we remove these insects with one hand and throw them away.
(3) The demigods were in the clouds, and they were throwing down flowers just like water pours down from clouds.
(4) Kapiladeva's mother was questioning in the palatial house.
(5) This cosmic manifestation is different and non-different from the Lord, because it is coming out from His bodily effulgence; for example, from sunlight all the planets are being [handwritten] created, similarly, the effulgence emanating from the body of the Lord is creating so many universes.
(6) When S. Manu & his family attended arotik many people and servants were there, because he was emperor or king.
(7) 1st Boar Incarnation is not different from Baraha. Lord Brahma was seeing from his plane.
(8) In Ch. 31, the progress from subtle to gross elements is just like sometimes a rocket is thrown in the sky, bursts, and so many lights & illuminations come. Exactly how, that is artist's work.
(9) Baby in the womb prays to 4-handed Narayan. Actually, the baby remains with hands folded as if praying until he is born. Narayan is inside.
(10) Time mixes with the material energy just like a flower bud: in due course of time the bud fructifies and comes into flower, or like a time bomb: in due course it bursts out.
(11) Greed is potential, lust is an active outburst.
(12) Agitation of time is just like a water pot put on the fire, and after some time becomes boiled; when it comes to this boiling point, that is agitation. Or, with chemicals, if alkaline and acid mixed, there is effervescence or agitation.
(13) Devahuti's house is the palace or flying city that Kardama Muni created by mystic powers.
(14) Garbodakhsayee Vishnu lays on the water.
(15) Krishna had a chariot driver.
Thank you for helping me in this way. I hope this will meet you in good health.
Your ever well-wisher,

ACBS/sda
n.b. Suzanne Brezinski has requested initiation, but Rupanuga has not sanctioned. Ask him this point. [handwritten]