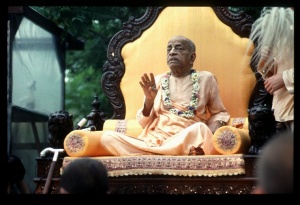 Śyāmasundara: Where you are sitting?

Rajaji: I am sitting here, so that I might give my right ear to you all. I haven't seen you before.

Prabhupāda: Yes, it is your seat.

Rajaji: Very good, Where is my seat?

Prabhupāda: You can take it, this seat.

Rajaji: (indistinct) . . . the camera should have operated on your beautiful sārī. It's very good. Who is the chief of your group? You or he?

Rajaji: He holds a big stick, so I'm asking.

Madhudviṣa: Prabhupāda is the chief. He has given me the stick.

Rajaji: Where is my negro friend? He has not come?

Prabhupāda: Oh, he is not come. There was no place in the car. There are many negroes.

Madhudviṣa: It is four bamboos.

Prabhupāda: This is Vaiṣṇava. Vaiṣṇava.

Rajaji: Are there three sticks in it?

Madhudviṣa: No, there are three pieces—one, two, three. There is four sticks wrapped here.

Rajaji: You have taken sannyāsa?

Madhudviṣa: Our Guru Maha . . . Prabhupāda has given me sannyāsa.

Rajaji: Then only you can hold it.

Rajaji: Yes, yes. Sit down, sit down. I will make the camera come out. (laughter) Can you take a photograph?

Śyāmasundara: Maybe he's too close. That's why it won't turn out.

Rajaji: Very well. I was told you were seventy-six.

Rajaji: Yes. This is my good ear. Yes.

Rajaji: You can sit here.

Rajaji: How many are you here in Madras?

Girirāja: About fifteen are here in Madras now.

Rajaji: You belong to West Bengal, I think?

Prabhupāda: My birthplace is in Calcutta.

Prabhupāda: Where you were governor also.

Rajaji: They were all very good to me. They looked upon me as a . . . an impartial man, which is a very great compliment in our country. Now you have undertaken a very great task. I am not competent to discuss or comment on it.

Prabhupāda: No, I think you are the best man to comment upon it.

Rajaji: True. Still, I am not presumptuous enough to comment on one who has actually taken up the work. That is the difference between thinking and doing. Thinking is easy. Doing requires inspiration, and you have taken it up.

Prabhupāda: I was thinking of taking up this task long, long ago. I wrote one letter to Mahatma Gandhi that, "You have got influence all over the world, and you are acknowledged a man of spiritual understanding. Now you have got svarāj, you better retire and take up this preaching of Bhagavad-gītā all over the world."

Rajaji: He was doing if from the beginning—not exclusively that, but applying the Bhagavad-gītā to everything that he was doing. He was doing it really. But you are referring to concentrated, exclusive . . .

Prabhupāda: . . . when he was vice-president.

Rajaji: Radhakrishnan, highly intellectual, good man, but he was more of a . . . there was no inspiration he gave.

Rajaji: God seems to have decided to spare him (laughs) from that, from hard work.

Prabhupāda: In Calcutta he was a professor.

Prabhupāda: No. I have got different centers.

Rajaji: And they live together there?

Prabhupāda: Oh, yes. We have got devotees in each center not less than twenty-five, and up to two hundred.

Rajaji: Now, taking up my thoughts on the crude difficulties of management. First of all there is the very crude necessity of getting money to run these institutions.

Prabhupāda: I may inform you, in this connection . . .

Prabhupāda: . . . that we are spending at the present moment seventy to eighty thousand dollars per month.

Rajaji: That's right. So whatever the exact amount may be, it's likely to be a big amount, and that means befriending people who will be prepared to part with the money . . .

Rajaji: Money god is greater than Brahma and Śiva and Viṣṇu, just about, unfortunately. The people have made an idol of gold and silver and letter of paper, paper meaning the promises of government . . .

Prabhupāda: I was going to say, it is a fraud.

Prabhupāda: It is māyā. I give you piece of paper, and you think one thousand rupees. This is māyā.

Rajaji: Yes. You see it depends on the credit to the man who gives the promise. Paper is mainly the document of credit. Governments have till now kept their credit, but now they have learned to disregard their promises also.

Rajaji: So that is one of the main troubles.

Rajaji: Let them give. That . . . but that is the smallest point. Another point is, I suppose in each institution, in each center, there are men as well as woman . . .

Prabhupāda: Not together. Woman's section is different.

Rajaji: . . . because all religious organizations have floundered on scandal, and you will have to be very careful about that.

Rajaji: This is what an old man has a right to tell you.

Prabhupāda: Yes. No, from the very beginning, because in Western countries the boys and girls, they intermingle very freely.

Rajaji: Oh, yes, we know all that.

Rajaji: We know for a fact.

Prabhupāda: . . . and therefore I, as far as possible, I get them married.

Rajaji: Yes. But that doesn't prevent permissive culture. It acts as a sort of guarantee (Prabhupāda laughs), as a sort of insurance against scandal. But scandals do come out.

Rajaji: So you are left with, that is another crude problem . . .

Rajaji: . . . that you have to take great care about. The traditional life of separate living is safer for organization. So all right to have men and are married and then in family they can mix. There is no difficulty. But when you start the separate organization, against which people are ready to manufacture stories, then you will have to be much more careful.

Rajaji: So that is one comment I make as an old man.

Rajaji: That is a wise thing from an old man. That's one thing. Then these are minor matters. On the philosophy of action which you have taken . . .

Rajaji: . . . Girirāja, whether it is the Gītā that you may stress on or the Bhāgavatam.

Prabhupāda: Gītā is the preliminary study of Bhāgavatam.

Prabhupāda: Yes. That we are very cautious.

Prabhupāda: That we are very cautious.

Rajaji: You will have to be very cautious.

Prabhupāda: Yes. I was discussing this point . . .

Prabhupāda: Ah, that is nonsense.

Rajaji: Now, that is a danger. But so far as the Gītā-ācārya's teachings, who is a different person . . . there's no reference to early life in Vyāsa's Bhagavad-gītā. The Bhagavad-gītā is simply about an ācārya. Occasionally He says "I am īśvara," but He's an ācārya primarily. I need not . . . I am not trying to sermonize to you, but I'm trying to explain what I feel.

Rajaji: Very difficult doctrine of detachment. The Gītā-ācārya says sannyāsa is difficult, and you are likely to become a hypocrite if you, if you . . .

Rajaji: . . . if you prematurely take sannyāsa. Therefore try and compromise the principles of sannyāsa, that is to say of renunciation, with worldly action, and, I mean, performance of duty, by performing the duties without caring for the results. That is the renunciation He has preached, I have understood.

Rajaji: The Gītā-ācārya that . . . (indistinct) . . . will confirm, I have no doubt. But the question which I put to Girirāja was whether it would not have been better if you work from inside rather than make yourself a separate cult and organization. Separate organization, once you form it, becomes like a person who is born. He gets his attachment, his ego, his everything.

Therefore I was wondering whether it would not, if you had convinced that your mission was to spread the Gītā-ācārya's teachings as to how to act with detachment and with faith in the grace of God, where you go wrong, could not be having better done without making yourself separate.

Prabhupāda: No. The thing is, when there is detachment, there must be another attachment.

Prabhupāda: Yes. But that is required.

Rajaji: Yes. Attachment to . . . there is a Tamil, Kurul. You have heard of the name Kurul, Thiruvalluvar—it is classic, Tamil classic—makes this point very clear.

Rajaji: If you wish to live without detachment, attach yourself to God.

Prabhupāda: After getting good attachment, one gives up the inferior attachment.

Rajaji: Right. That will better right. The attachment should be to God.

Rajaji: Kṛṣṇa, Govinda, as I will call Him.

Rajaji: Attachment should be to Govinda, not to an organization.

Rajaji: I don't want to discuss it, I told you. I'm not competent to discuss. I'm just telling you what I think.

Prabhupāda: No. I'm also answering this point. Just like Kṛṣṇa, His name, His form, His pastimes, His entourage, they are all the same. Otherwise, what is the benefit of chanting Kṛṣṇa's name?

Suppose I am thirsty just now. If I simply chant the name of water, "water," I'll not be satisfied. Water is required, actual substance. But when we chant "Kṛṣṇa," if Kṛṣṇa name is different from Kṛṣṇa, then you . . . (end)