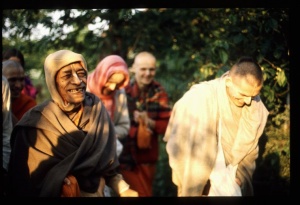 If there is simply the attempt is there how to glorify the Supreme Lord. That is a fact. It doesn't matter whether it is written in correct language or incorrect language. It doesn't matter. If the whole thought is targeted to glorify the Supreme Lord, then nāmāny anantasya yaśo 'nkitāni yat gṛṇanti gāyanti śṛṇvanti sādhavaḥ. Then those who are actually sādhu, even in spite of all these defects, because the only attempt is to glorify the Lord, then those who are sādhu, those who are devotee, they hear it. Śṛṇvanti gāyanti gṛṇanti. Not only hear, they chant also the same thing. And not only chant, but gṛṇanti, they apply in their actual life. This is the Bhāgavata śloka. Is it clear now? Yes.

Tad-vāg-visargo janatāgha-viplavo. If the thought is revolutionary for transcendental realization, even it is not properly composed from grammatical and literary point of view, because the attempt is there for glorifying the Supreme Lord, all devotee, all great sages, saintly persons, sādhavaḥ, gṛṇanti, they accept. Yes. Gṛṇanti śṛṇvanti, hear with attention, and gāyanti, and chant also. This is the principle. The only center is whether it is meant for awakening God consciousness. That is the central point, not the language. But it does not mean that it should not be correctly written. Correctly or incorrectly, if it is spoken by realized soul, that is important. Śṛṇvanti gāyanti. Some way or other, if the attempt is to glorify the Supreme Lord.

Otherwise, if the attempt is to kill the Supreme Lord . . . just like Dr. Radhakrishnan: what is the value of such erudition? A rascal. That is called vāk-cāturyam, jugglery of words. It has no value. Anyone who is trying to present . . . just like Aurabindo, he has no idea what is Kṛṣṇa, and writing so many nonsense things. Vivekananda, he has no idea. Dr. Radhakrishnan. Rabindranath Tagore, he has no idea what is God, but he is writing Gītāñjali. That should be tested by life. Caitanya Mahāprabhu speaking, āpani ācari prabhu jīvere śikhāya: He behaves Himself perfectly, and then teaches how to become a devotee. He is mad after Kṛṣṇa; He is falling down in the sea. You see? So that is wanted. And the Bhāgavata also says, sa vai puṁsāṁ paro dharmo yato bhaktir . . . (SB 1.2.6), how one has increased his devotion and love for Kṛṣṇa, that is the test of it. Not these formalities.

Another place Kṛṣṇa says, api cet su-durācāro bhajate mām ananya-bhāk (BG 9.30). Even sudurācāraḥ, even not well behaved, but unflinching faith in Kṛṣṇa, sādhur eva sa mantavyaḥ, he is sādhu. Don't consider about his misbehaviors. That is not consideration. That will be corrected. Because he has taken to Kṛṣṇa consciousness, gradually those things, those defects will be corrected. Kṣipraṁ bhavati dharmātmā śaśvac-chāntiṁ nigacchati (BG 9.31): he will become very soon a great religious soul because he has taken to Kṛṣṇa.

So in the beginning if there is some defect, we should not consider that. We have to see how much his love for Kṛṣṇa has increased. That is the test. Not the formalities. That is the test: how much he has sacrificed for Kṛṣṇa, how much he is prepared to sacrifice for Kṛṣṇa. If one takes Kṛṣṇa for making business, that is different thing. That is not devotion. Śālagrāma . . .

My Guru Maharaja used to say, śālagrām diye badam bhanga. Just like you have seen śālagrāma. So if somebody takes that and breaks peanuts, so there is no devotion. It is a show. During . . . attracting the visitors, it is nicely decorated, but in their absence, take it and you will have stone.

So all this, mostly the temple show is going on like that. They have made it a show of business. The devotees will come and pay something, and I may have devotion or not devotion, it doesn't . . . one should be bahyābhyantaraḥ śuciḥ (Garuḍa Purāṇa), inside and outside perfect.

And then, against this:

Vāyasam means crow. The crow take enjoyment in the garbage. You have seen? They won't go in a nice place. They will come all together. Just like vultures, they come together to take pleasure in a corpse, dead body. But a white swan, rāja-haṁsa, he goes to a place where there is nice water, lilies and lotus and nice trees. You have seen that St. James's Park? Yes. They will find out such nice place. They won't go to imitate the crows. The crows-like people will take pleasure in such nonsense literature, sex literature, or any such literature. So many nonsense literatures nowadays they are having good sale.

Because people are becoming crows-like, they have no high idea, they have no sense of Kṛṣṇa consciousness; naturally they will take. Just like hippies, they have become all bad taste, crows-like. So we have to become swans, rāja-haṁsa, paramahaṁsa. Paramahaṁsa. Paramo nirmatsarāṇām (SB 1.1.2). Then you can understand Kṛṣṇa consciousness. If you remain crows, then you cannot; that is not possible.

So by nature's example we have to see if crows-like and swans-like, pigeons-like, birds of the same feather. "Birds of the same feather flock together," is it not? So you have to change your feather, then he will be pleased. If you keep your feather the crows-like, then you cannot mix with the swans. That is not possible. This is the test. There are classes of men like crows, and there are classes of men like swans. So we are preparing our devotee . . .

(aside) What is that?

Devotee (1): Is anybody watching?

(aside) You have some papers I shall show?

Śyāmasundara: I just wanted to check and see if there's somebody here. It's Nanda-kumāra.

Prabhupāda: So keep this principle in view, that you have to become swan, not crows. They say that everyone, every religion is all the same. This is all nonsense. Not same. In Bhagavad-gītā there are different types of religion, sāttvika, rājasika, tāmasika. And our this . . . if you take it as religion, this is transcendental. Sa vai puṁsām paro dharmo (SB 1.2.6).

Paraḥ means transcendental. It is not ordinary, aparaḥ. In aparaḥ dharma, the materialistic dharma, there are ritualistic ceremonies how to make one perfect for accepting transcendental religion. But this Kṛṣṇa consciousness is directly putting oneself in the transcendental.

(aside) Why don't you close it?

Caitanya-caritāmṛta say, kṛṣṇe bhakti kaile sarva-karma kṛta haya (CC Madhya 22.62). If you become Kṛṣṇa conscious, then it is to be supposed that you have finished all other types of religion. My Guru Maharaja used to cite one example that one's friend was sitting on the high-court judge's bench.

But is that very good argument, such a high-court judge is seated there without any salary? This argument is . . . that is enviousness. Nirmatsaratā. That is the habit of the conditioned soul. So if one . . . (break)

Prabhupāda: There is another example, just one sees the moon "oh,"everyone says it is very beautiful, I spite upon it (makes spitting sound) so what is that spite?

Prabhupāda: He falls on his face.

Prabhupāda: So when a person becomes envious of a great person then he spites and the spite falls upon him . . . and he is far away. And the High Court judge one may accept him that he's not getting salary but he will get his salary, that's all. So parama . . . this bhāgavata-dharma is for the parama-nirmatsarāṇām those who are not envious.

These people are envious they have no personal capacity but they are very much expert to become envious of a person who is capable.

These are crows like, vulture like, tad-vāg-visargo janatāgha-viplavo. So our this movement is not liked by these men, those who are habituated to spite upon the moon. They do not like us because it is hampering . . . it is revolutionary . . . it is hampering their business, that you will have to face but you have to go steady, you can do it . . . just like Gauracand Gosvāmī, you see? What he is?

But he is sitting there as sevite-gosvāmī. The same things are going on like that everywhere. He has no education, he has no spiritual life, habituated to all bad habits, all cliques, all cheating everything but he is the head sevite, this is going on. They have no respect for Vaiṣṇavas, so everywhere you find such things.

Devotee: And everybody knows it but nobody actually wants to do anything. So many people that know it in Vṛndāvana, we talk to them but they don’t want to do anything . . . (indistinct)

Devotee: They can see it. First time I visited, I was speaking, I wasn’t saying anything I was just watching and he took out a cigarette, what is this a Svāmī smoking?

Prabhupāda: Yes there is the English word, "Familiarity breeds contempt." If an important man is familiar, so he doesn’t think that he is very important, that is nature.

So now you can disperse, the time is spent. (end)