710928 - Letter to Giriraja written from Nairobi 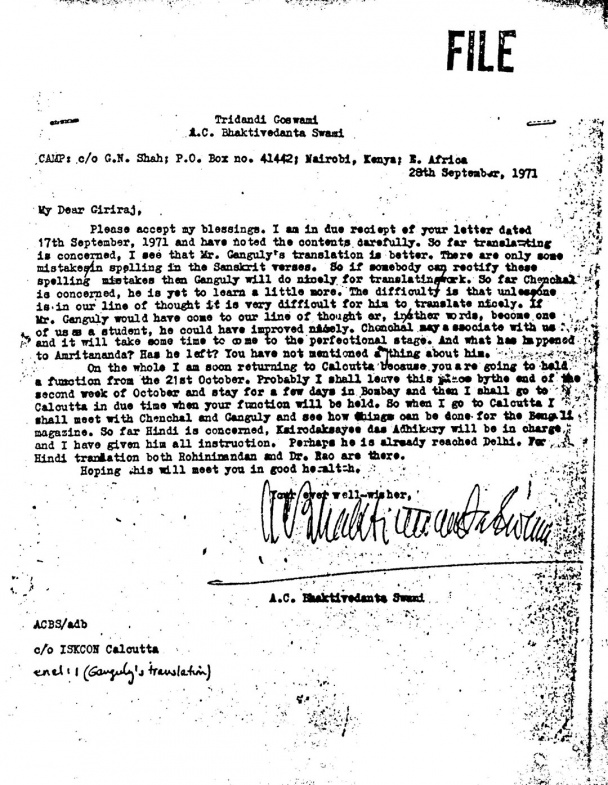 Please accept my blessings. I am in due receipt of your letter dated 17th September, 1971 and have noted the contents carefully. So far translating is concerned, I see that Mr. Ganguly's translation is better. There are only some mistakes in spelling in the Sanskrit verses. So if somebody can rectify these spelling mistakes then Ganguly will do nicely for translating work. So far Chenchal is concerned, he is yet to learn a little more. The difficulty is that unless one is in our line of thought it is very difficult for him to translate nicely. If Mr. Ganguly would have come to our line of thought or, in other words, become one of us as a student, he could have improved nicely. Chenchal may associate with us and it will take some time to come to the perfectional stage. And what has happened to Amritananda? Has he left? You have not mentioned a thing about him.
On the whole I am soon returning to Calcutta because you are going to hold a function from the 21st October. Probably I shall leave this place by the end of the second week of October and stay for a few days in Bombay and then I shall go to Calcutta in due time when your function will be held. So when I go to Calcutta I shall meet with Chanchal and Ganguly and see how things can be done for the Bengali magazine. So far Hindi is concerned, Ksirodaksayee das Adhikary will be in charge and I have given him all instruction. Perhaps he is already reached Delhi. For Hindi translation both Rohininandan and Dr. Rao are there.
Hoping this will meet you in good health.