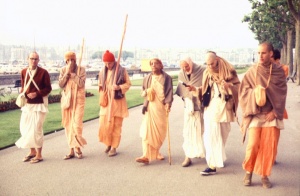 Prabhupāda: . . . some treatment he is undergoing?

Gaurasundara: No, there is no treatment.

Govinda dāsī: He says there is no treatment.

Prabhupāda: So what he is eating?

Prabhupāda: Then, but he gets sick all the time. So what is the cause of sickness?

Gaurasundara: Well, from the fasting too long it appears that his digestive system has stopped from lack of use, and now he just doesn't . . .

Prabhupāda: No. Now whatever he is eating, he is evacuating?

Gaurasundara: No. He has trouble, He has great trouble.

Govinda dāsī: He has to drink prune juice. Every, every day we have to supply him juice.

Govinda dāsī: Or otherwise he can't eat. It won't . . . his digestive system won't work. I have to show now.

Prabhupāda: Hmm. So he is not getting strength by eating?

Prabhupāda: He should not eat too much, but eat substantial. What is his age?

Prabhupāda: Oh, he is young boy. So, easily digestible, nutritious. So dal, he can take. Dal?

Gaurasundara: I think so.

Gaurasundara: He takes a lot of fruit and vegetables.

Govinda dāsī: Lots of papaya. It helps his digestion.

Govinda dāsī: Hm. He eats four or five papayas in a day.

Govinda dāsī: Chanting. Yes. He's not so much disturbed by it, because he's been sick a long time, so . . .

Govinda dāsī: He said in raising the body heat with kuṇḍalinī yoga it burned the nervous system. I don't know anything about the . . .

Prabhupāda: Kuṇḍalinī is bad to him?

Prabhupāda: What is this kuṇḍalinī? What do . . . what is the benefit of kuṇḍalinī?

Prabhupāda: We have never such attraction for kuṇḍalinī . . . (indistinct) . . . we simply believe in the words of Bhaktisiddhānta Sarasvatī, that's all. No kuṇḍalinī. I was attracted, "Oh, he is speaking nicely, "Kṛṣṇa can be seen." " So I was attracted, like that: "Kṛṣṇa is not dead. He is living." In the beginning (laughs) that enlightened me. From the very beginning of our life we are trained, "Kṛṣṇa is God. Kṛṣṇa is person."

Later on, in our school, college days, by bad association there was some impersonalist tendency. But when I heard from Guru Mahārāja that Kṛṣṇa is person, the Supreme, oh, I became so much . . . (indistinct) . . . yes. Then it was fixed up. I have written that, "Impersonal calamities thou hast moved." There was a current, when I was little, thinking that Lord is impersonal; that was not appealing. And when it was confirmed, I became very much glad. Any other questions?

Govinda dāsī: No. Gaurasundara is leaving today, I think. Are you leaving tomorrow?

Prabhupāda: He can leave tomorrow, together. You are leaving tomorrow?

Gaurasundara: On the deities, what should be the size?

Gaurasundara: That's five of them?

Gaurasundara: Five of them together, four feet?

Govinda dāsī: That's very nice. No. Now They won't be as wide, They will be taller.

Prabhupāda: You can see the picture. (pause)

No. Then you can make short. You see.

Prabhupāda: That's all right. You paint the picture; you do it. Hare Kṛṣṇa.

Prabhupāda: You can take this flower garland.