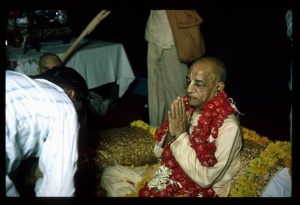 Mr. Principal, boys and girls, I am very happy to meet you, and I shall try to explain what is this Kṛṣṇa consciousness movement that we have inaugurated from the Western world. I was . . long before, I wrote one letter to Mahatma Gandhi, perhaps in the year 1946, requesting him to preach the gospel of Bhagavad-gītā as it is. I told him that "Mahatmajī, your position is unique, and you are lover of Bhagavad-gītā. Now, somehow or other, your people have attained independence; you can retire from this politics and take to the business of preaching Bhagavad-gītā as it is." Unfortunately, I did not receive any reply from him. He was so busy.

The fact is that since a very long time, I was thinking that throughout the whole world there are so many parties for political emancipation, which is only temporary thing, but there is no party representing Kṛṣṇa, or the Supreme Personality of Godhead. That was my dream, that if Lenin and other big, big political leaders, they could form their party, why not Bhagavad-gītā, or the followers of the Bhagavad-gītā, or the devotees of Lord Kṛṣṇa do form a party to preach this Kṛṣṇa consciousness movement all over the world? That was my ambition.

But I tried to start this movement in India. I saw Pandit Jawaharlal Nehru, I saw President Radhakrishnan, I saw Lal Bihari Shastri, many prominent men, and requested them that this is Indian original culture—Kṛṣṇa consciousness—and if we present this Kṛṣṇa consciousness movement in its right form, people will accept it, and the whole world will be benefited.

But . . . of course, I was sympathetically received by Lal Bihari Shastri. He was very much sympathetic with me. And our President Radhakrishnan, he promised that, "Swāmījī, maybe after retirement I shall join you." Anyway, I could not get any help either from the politicians or from any other party. Then I decided that I should go to America. And I was dreaming that if the American people will accept this Kṛṣṇa consciousness movement, maybe our Indian brothers may follow them.

So I went to America in 1965, September, alone, without . . . you know government does not allow any money to be carried, so I had only forty rupees with me. And somehow or other I secured a free passage to New York, and I got my P-form passed also by the then chief controller of foreign exchange, Mr. Rao. Some way or other I reached Boston on the seventeenth of September, 1965. But I was thinking that "Who will hear about my mission?" Because according to our Kṛṣṇa consciousness movement, one must be free from all sinful reaction.

Without being freed from sinful activities, nobody can understand the science of God. Most of you have read Bhagavad-gītā. You will find there in the Tenth Chapter Arjuna is addressing Krsna as:

So Bhagavad-gītā, Kṛṣṇa also says, yeṣāṁ anta-gataṁ pāpaṁ. Means anyone who is completely freed from the contamination of sinful activities:

In another place it is stated that:

Those who are mahātmā, they are not under the spell of this material nature. They are under the protection of the spiritual nature.

In the Vedas it is said that the Absolute Truth has multi-energies.

This material world is temporary. Even this life, suppose you are sitting here, you are claiming yourself Gujarati, I am claiming myself as Bengali, they are claiming themselves as European, American—but these claims are also temporary. They are not permanent. You are Gujarati say for fifty to a hundred years. Then when your body is changed, you may become another species of life, maybe animal life, maybe demigod life. Then your identification as Gujarati is no more. You are another identification.

In this way we are simply changing different identification—vāsāṁsi jīrṇāni yathā vihāya (BG 2.22). Just like we change our dresses from one color dresses to another color dresses. Similarly, this business is going on. I am changing in 8,400,000 species of life, going round, beginning from the Brahmaloka down to the Pātālaloka. That is stated in the Bhagavad-gītā:

Even if you go to the highest planet by dint of your austerity, penances, still you have to come back again. But, mad-dhāma gatvā punar janma na vidyate (BG 8.16). These are stated in the Bhagavad-gītā: "If you come to My abode, then you will have not to accept again material body."

The Kṛṣṇa consciousness movement means to understand one's real, constitutional position, not to give away oneself with the whims of this material nature, and changing one body to another, another body to another, perpetually. This human form of body is a chance to get out of the cycle of birth and death. We have read in the Bhagavad-gītā actually the living entity has no birth, no death—na jāyate na mriyate vā (BG 2.20). It has neither death nor birth. This birth and death are due to this body, which you have accepted and we have temporary identified. This is called upādhi.

According to Vedic language this is designation. "I am Hindu," "I am Muslim," "I am Gujarati," "I am Bengali," "I am European," these are only designation. You have to become freed from these designation. Sarvopādhi-vinirmuktaṁ. When you become freed from all designation, tat-paratvena nirmalam, and become purified by devotional service, at that time, hṛṣīkeṇa hṛṣīkeśa-sevanaṁ bhaktir ucyate (CC Madhya 19.170). At that time, when your senses are engaged in the service of the master of the senses, that is called bhakti, or Kṛṣṇa consciousness. Bhakti or Kṛṣṇa consciousness is identical.

So we are teaching this philosophy all over the world. And I am very glad to inform you that our workers and members of the Society are all young men and women. You will find my disciples who are here, they are from twenty to thirty years old. Nobody is more than thirty years. They joined me five years ago. So it is a good news that this movement is attracting all over the world these younger generation. And we have brought this younger Western youth and young women just to attract you to this movement. I hope that the younger generation of India also will try to understand this philosophy, Kṛṣṇa consciousness.

It is nothing new. It is not that we have introduced something new. It is the oldest—nityaḥśāśvato 'yaṁ purāṇo (BG 2.20). Purāṇo means "very old." It is not new. Kṛṣṇa is eternal. We are also eternal. As it is stated in the Vedas:

So Kṛṣṇa is nitya, eternal. We are also eternal. But we have been covered by these material designations; therefore we have forgotten our relationship with Kṛṣṇa. We have to revive it. That is Kṛṣṇa consciousness. That Kṛṣṇa consciousness is dormant in everyone's heart. That is a fact. Otherwise, why these foreigners, who never heard of Kṛṣṇa four years back, how they are taking seriously to Kṛṣṇa consciousness movement?

So that is a tested fact that Kṛṣṇa consciousness, as it is stated in the śāstras . . . we hear from Caitanya-caritāmṛta, it is said there, nitya-siddha-kṛṣṇa-bhakti. Kṛṣṇa consciousness is eternal fact, and Caitanya Mahāprabhu also taught this philosophy: jīvera svarūpa hoy nitya-kṛṣṇa-dāsa (CC Madhya 20.108). The constitutional position, eternal constitutional position, all the living entity, is to serve the Supreme Personality of Godhead.

There are many instances and Vedic evidences that the living entity is the eternal servant of God. Unfortunately, being entrapped by this material condition, he is trying to be master himself. Constitutionally he is servant, and because he is artificially trying to become master, he is suffering. Anything if you try to become artificially, that will be a cause of suffering. Best thing is that if you become satisfied with your constitutional position, and that will give you happiness and satisfaction.

Just like here in your this educational institution, you are all students, and there are teachers. But if you artificially want to take the position of a teacher now, that will be an uncomfortable position, because that is not natural. Better you remain as a student and take lessons from your teacher. That is very happy. Similarly, we are part and parcel of God. As you have read from the Bhagavad-gītā: mamaivāṁśo jīva-bhūtaḥ (BG 15.7): "The living entities who are now identifying with this material world, they are My part and parcel."

So constitutionally we are part and parcel of the Supreme Lord. Just like a machine, there are so many parts. So a screw in the machine is a part of the machine, but it is not the machine. Although a screw may be very important part of the machine, but still the screw cannot claim that he is the whole machine. Similarly, there are various parts and parcels of the Supreme Personality of Godhead, but we cannot claim ourselves as the supreme. The part and parcel's business is to serve the whole. That is our natural condition.

So this subject matter is very long and philosophical, but the sum and substance is that we are minute part and parcel of the Supreme God, and God is the supreme whole. Our constitutional position is to serve Him. Therefore Kṛṣṇa says at the ultimate issue of Bhagavad-gītā:

"Give up all other occupation. Simply engage yourself in My execution of order," just like Arjuna did.

The difference is that in the beginning he was not Kṛṣṇa conscious. He was thinking out of his own consciousness. But after being taught of the philosophy of Bhagavad-gītā, he agreed to act according to the order of Kṛṣṇa: kariṣye vacanaṁ tava (BG 18.73). Kṛṣṇa inquired from Arjuna that "Now what you have decided?"

So Arjuna said voluntarily that kariṣye vacanaṁ tava (BG 18.73). That is the instruction of Bhagavad-gītā. You learn Bhagavad-gītā and you follow the orders of Kṛṣṇa. When you do that, you are in perfect Kṛṣṇa consciousness, and your life is perfect. This philosophy we are teaching through many books, magazines and lecturing, touring all over the world.

So our request is that you also try to understand what we are doing and join us and make this movement progressive, so that the whole world will be peaceful and happy, not only in this life but also in the next life.