700909 - Letter to Bhavananda written from Calcutta 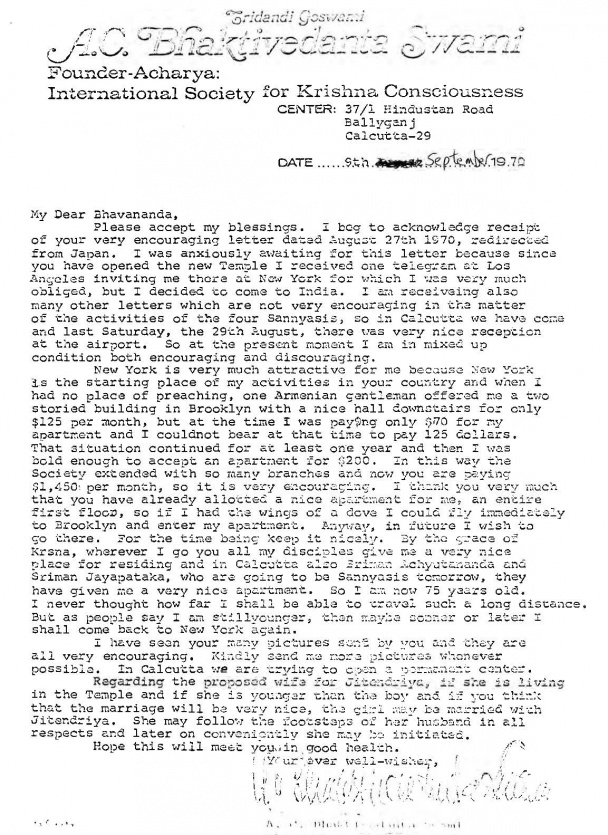 
My Dear Bhavananda,
Please accept my blessings. I beg to acknowledge receipt of your very encouraging letter dated August 27th 1970, redirected from Japan. I was anxiously awaiting for this letter because since you have opened the new Temple I received one telegram at Los Angeles inviting me there at New York for which I was very much obliged, but I decided to come to India. I am receiving also many other letters which are not very encouraging in the matter of the activities of the four Sannyasis, so in Calcutta we have come and last Saturday, the 29th August, there was very nice reception at the airport. So at the present moment I am in mixed up condition both encouraging and discouraging.
New York is very much attractive for me because New York is the starting place of my activities in your country and when I had no place of preaching, one Armenian gentleman offered me a two storied building in Brooklyn with a nice hall downstairs for only $125 per month, but at the time I was paying only $70 for my apartment and I could not bear at that time to pay 125 dollars. That situation continued for at least one year and then I was bold enough to accept an apartment for $200. In this way the Society extended with so many branches and now you are paying $1,450 per month, so it is very encouraging. I thank you very much that you have already allotted a nice apartment for me, an entire first floor, so if I had the wings of a dove I could fly immediately to Brooklyn and enter my apartment. Anyway, in future I wish to go there. For the time being keep it nicely. By the grace of Krsna, wherever I go you all my disciples give me a very nice place for residing and in Calcutta also Sriman Achyutananda and Sriman Jayapataka, who are going to be Sannyasis tomorrow, they have given me a very nice apartment. So I am now 75 years old. I never thought how far I shall be able to travel such a long distance. But as people say I am still younger, then maybe sooner or later I shall come back to New York again.
I have seen your many pictures sent by you and they are all very encouraging. Kindly send me more pictures whenever possible. In Calcutta we are trying to open a permanent center.
Regarding the proposed wife for Jitendriya, if she is living in the Temple and if she is younger than the boy and if you think that the marriage will be very nice, the girl may be married with Jitendriya. She may follow the footsteps of her husband in all respects and later on conveniently she may be initiated.
Hope this will meet you in good health.
Your ever well-wisher,