700820 - Letter to Satsvarupa written from Tokyo 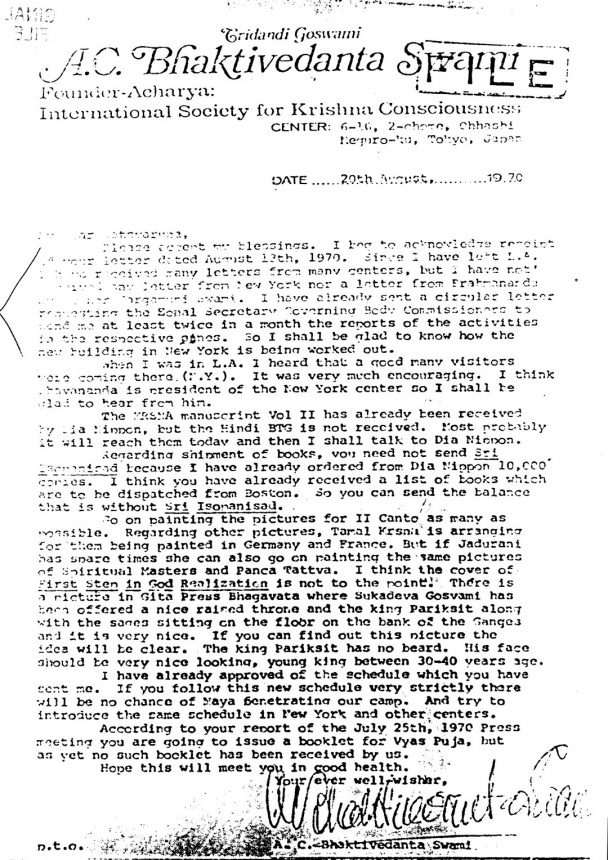 My Dear Satsvarupa,
Please accept my blessings. I beg to acknowledge receipt of your letter dated August 13rd, 1970. Since I have left L.A. I have received many letters from many centers, but I have not received any letter from New York nor a letter from Brahmananda Swami nor Gargamuni Swami. I have already sent a circular letter requesting the Zonal Secretary Governing Body Commissioners to send me at least twice in a month the reports of the activities in the respective zones. So I shall be glad to know how the new building in New York is being worked out.
When I was in L.A. I heard that a good many visitors were coming there (N.Y.) It was very much encouraging. I think Bhavananda is president of the New York center so I shall be glad to hear from him.
The KRSNA manuscript Vol II has already been received by Dia Nippon, but the Hindi BTG is not received. Most probably it will reach them today and then I shall talk to Dia Nippon.
Regarding shipment of books, you need not send Sri Isopanisad because I have already ordered from Dia Nippon 10,000 copies. I think you have already received a list of books which are to be dispatched from Boston. So you can send the balance that is without Sri Isopanisad.
Go on painting the pictures for II Canto as many as possible. Regarding other pictures, Tamal Krsna is arranging for them being painted in Germany and France. But if Jadurani has spare time she can also go on painting the same pictures of Spiritual Masters and Panca Tattva. I think the cover of First Step in God Realization is not to the point. There is a picture in Gita Press Bhagavata where Sukadeva Gosvami has been offered a nice raised throne and the king Pariksit along with the sages sitting on the floor on the bank of the Ganges and it is very nice. If you can find out this picture the idea will be clear. The king Pariksit has no beard. His face should be very nice looking, young king between 30-40 years age.
I have already approved of the schedule which you have sent me. If you follow this new schedule very strictly there will be no chance of Maya penetrating our camp. And try to introduce the same schedule in New York and other centers.
According to your report of the July 25th, 1970 Press meeting you are going to issue a booklet for Vyasa Puja, but as yet no such booklet has been received by us.
Hope this will meet you in good health.
Your ever well-wisher,