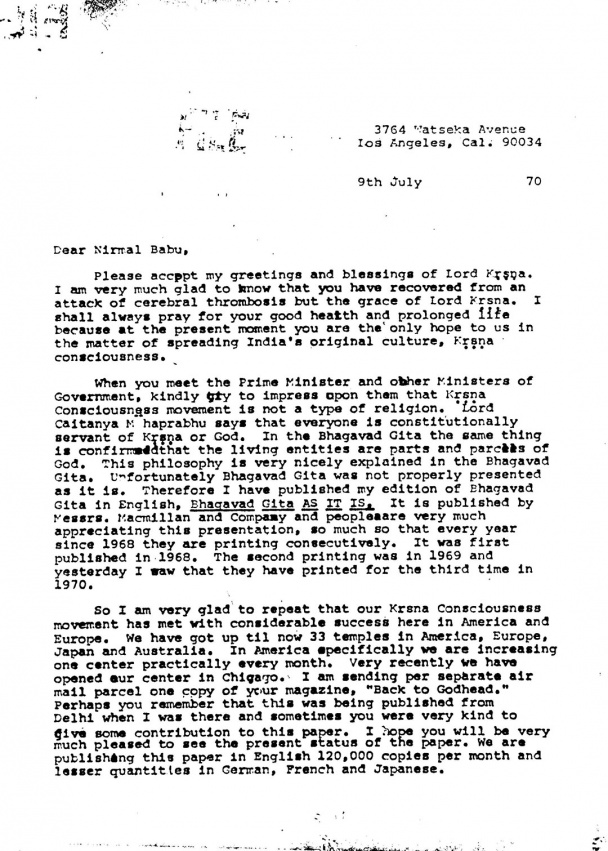 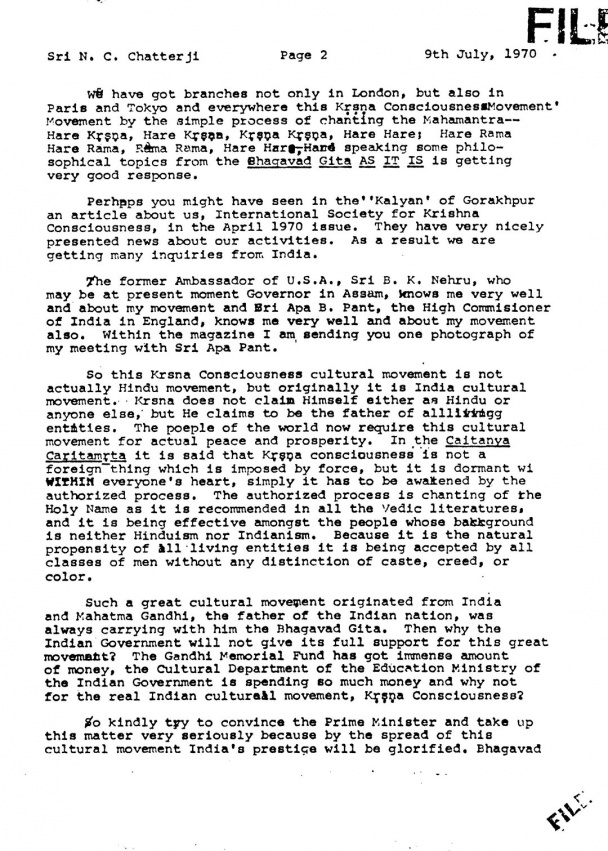 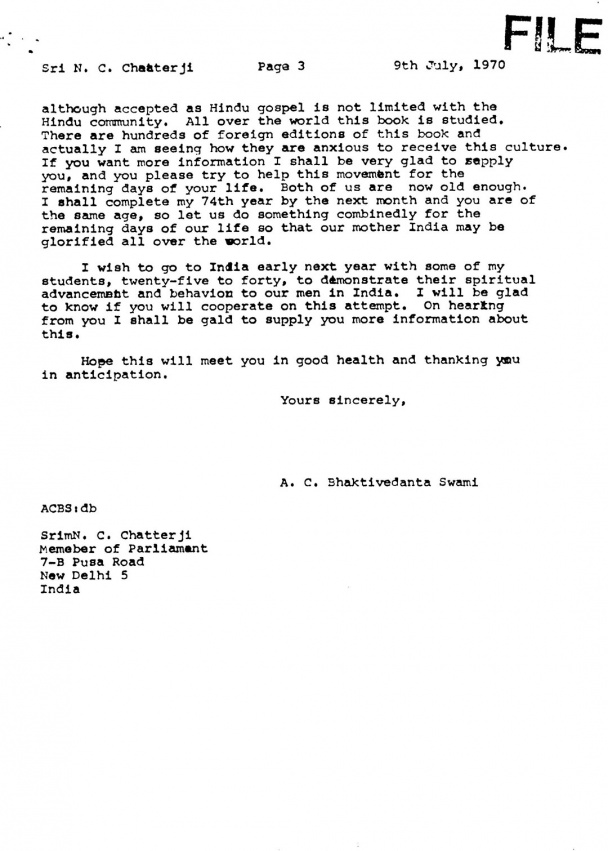 Please accept my greetings and blessings of Lord Krsna. I am very much glad to know that you have recovered from an attack of cerebral thrombosis by the grace of Lord Krsna. I shall always pray for your good health and prolonged life because at the present moment you are the only hope to us in the matter of spreading India's original culture, Krsna consciousness.

When you meet the Prime Minister and other Ministers of Government, kindly try to impress upon them that Krsna Consciousness movement is not a type of religion. Lord Caitanya Mahaprabhu says that everyone is constitutionally servant of Krsna or God. In the Bhagavad Gita the same thing is confirmed that the living entities are parts and parcels of God. This philosophy is very nicely explained in the Bhagavad Gita. Unfortunately Bhagavad Gita was not properly presented as it is. Therefore I have published my edition of Bhagavad Gita in English, Bhagavad Gita AS IT IS. It is published by Messrs. MacMillan and Company and people are very much appreciating this presentation, so much so that every year since 1968 they are printing consecutively. It was first published in 1968. The second printing was in 1969 and yesterday I saw that they have printed for the third time in 1970.

So I am very glad to repeat that our Krsna Consciousness movement has met with considerable success here in America and Europe. We have got up til now 33 temples in America, Europe, Japan and Australia. In America specifically we are increasing one center practically every month. Very recently we have opened our center in Chicago. I am sending per separate air mail parcel one copy of your magazine, "Back to Godhead." Perhaps you remember that this was being published from Delhi when I was there and sometimes you were very kind to give some contribution to this paper. I hope you will be very much pleased to see the present status of the paper. We are publishing this paper in English 120,000 copies per month and lesser quantities in German, French, and Japanese.

We have got branches not only in London, but also in Paris and Tokyo and everywhere this Krsna Consciousness Movement by the simple process of chanting the Mahamantra--Hare Krsna, Hare Krsna, Krsna Krsna, Hare Hare; Hare Rama Hare Rama, Rama Rama, Hare Hare, and speaking some philosophical topics from the Bhagavad Gita AS IT IS. is getting very good response.

Perhaps you might have seen in the "Kalyan" of Gorakhpur an article about us, International Society for Krishna Consciousness, in the April 1970 issue. They have very nicely presented news about our activities. As a result we are getting many inquiries from India.

So this Krsna Consciousness cultural movement is not actually Hindu movement, but originally it is India cultural movement. Krsna does not claim Himself either as Hindu or anyone else, but He claims to be the father of all living entities. The people of the world now require this cultural movement for actual peace and prosperity. In the Caitanya Caritamrta it is said that Krsna consciousness is not a foreign thing which is imposed by force, but is dormant within everyone's heart, simply it has to be awakened by the authorized process. The authorized process is chanting of the Holy Name as it is recommended in all the Vedic literatures, and it is being effective amongst the people whose background is neither Hinduism nor Indianism. Because it is the natural propensity of all living entities it is being accepted by all classes of men without any distinction of caste, creed, or color.

Such a great cultural movement originated from India and Mahatma Gandhi, the father of the Indian nation, was always carrying with him the Bhagavad Gita. Then why the Indian Government will not give its full support for this great movement? The Gandhi Memorial Fund has got immense amount of money, the Cultural Department of the Education Ministry of the Indian Government is spending so much money and why not for the real Indian cultural movement, Krsna Consciousness?

So kindly try to convince the Prime Minister and take up this matter very seriously because by the spread of this cultural movement India's prestige will be glorified. Bhagavad Gita although accepted as Hindu gospel is not limited with the Hindu community. All over the world this book is studied. There are hundreds of foreign editions of this book and actually I am seeing how they are anxious to receive this culture. If you want more information I shall be very glad to supply you, and you please try to help this movement for the remaining days of your life. Both of us are now old enough. I shall complete my 74th year by the next month and you are of the same age, so let us do something combinedly for the remaining days of our life so that our mother India may be glorified all over the world.

I wish to go to India early next year with some of my students, twenty-five to forty, to demonstrate their spiritual advancement and behavior to our men in India. I will be glad to know if you will cooperate on this attempt. On hearing from you I shall be glad to supply you more information about this.

Hope this will meet you in good health and thanking you in anticipation.