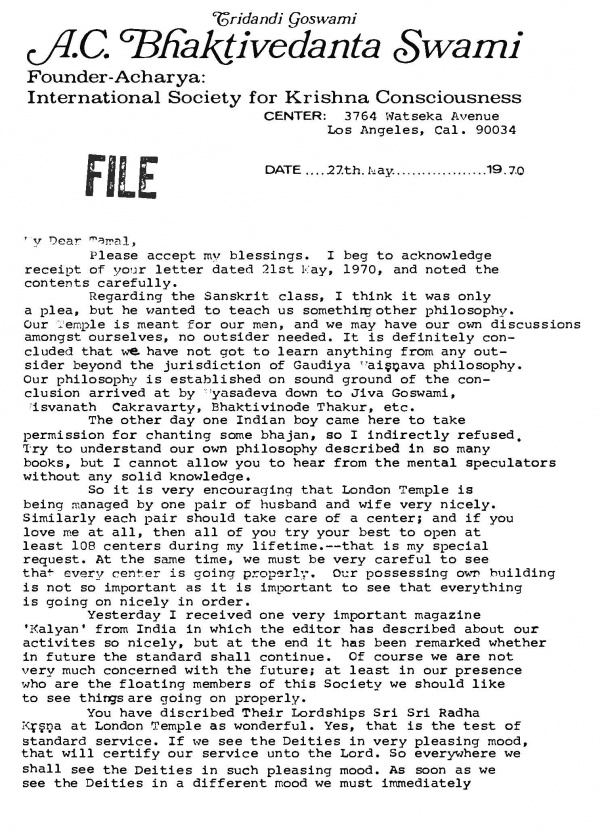 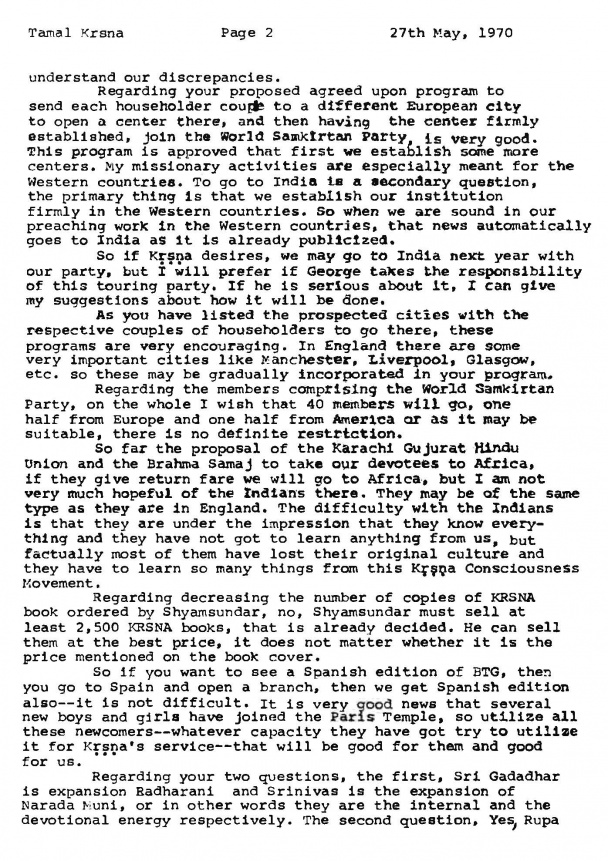 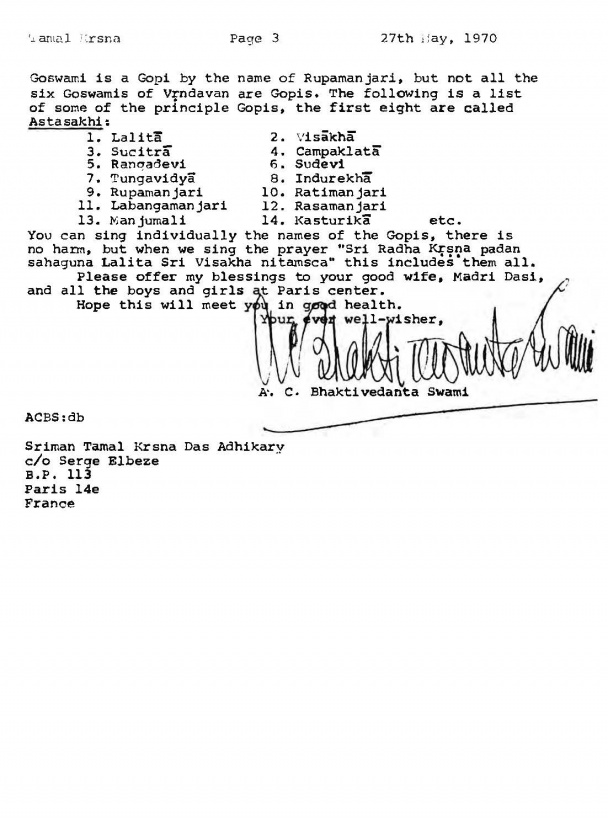 
My Dear Tamal,
Please accept my blessings. I beg to acknowledge receipt of your letter dated 21st May, 1970, and noted the contents carefully.
Regarding the Sanskrit class, I think it was only a plea, but he wanted to teach us something other philosophy. Our Temple is meant for our men, and we may have our own discussions amongst ourselves, no outsider needed. It is definitely concluded that we have not got to learn anything from any outsider beyond the jurisdiction of Gaudiya Vaisnava philosophy. Our philosophy is established on sound ground of the conclusion arrived at by Vyasadeva down to Jiva Goswami, Visvanath Cakravarty, Bhaktivinode Thakur, etc.
The other day one Indian boy came here to take permission for chanting some bhajan, so I indirectly refused. Try to understand our own philosophy described in so many books, but I cannot allow you to hear form the mental speculators without any solid knowledge.
So it is very encouraging that London Temple is being managed by one pair of husband and wife very nicely. Similarly each pair should take care of a center; and if you love me at all, then all of you try your best to open at least 108 centers during my lifetime,--that is my special request. At the same time, we must be very careful to see that every center is going properly. Our possessing own building is not so important as it is important to see that everything is going on nicely in order.
Yesterday I received one very important magazine 'Kalyan' from India in which the editor has described about our activities so nicely, but at the end it has been remarked whether in future the standard shall continue. Of course we are not very much concerned with the future; at least in our presence who are the floating members of this Society we should like to see things going on properly.
You have described Their Lordships Sri Sri Radha Krsna at London Temple as wonderful. Yes, that is the test of standard service. If we see the Deities in very pleasing mood, that will certify our service unto the Lord. So everywhere we shall see the Deities in such pleasing mood. As soon as we see the Deities in a different mood we must immediately understand our discrepancies.
Regarding your proposed agreed upon program to send each householder couple to a different European city to open a center there, and then having the center firmly established, join the World Samkirtan Party is very good. This program is approved that first we establish some more centers. My missionary activities are especially meant for the Western countries. To go to India is a secondary question, the primary thing is that we establish our institution firmly in the Western countries. So when we are sound in our preaching work in the Western countries, that news automatically goes to India as it is already publicized.
So if Krsna desires, we may go to India next year with our party, but I will prefer if George takes the responsibility of this touring party. If he is serious about it, I can give my suggestions about how it will be done.
As you have listed the prospected cities with the respective couples of householders to go there, these programs are very encouraging. In England there are some very important cities like Manchester, Liverpool, Glasgow, etc. so these may be gradually incorporated in your program.
Regarding the members comprising the World Samkirtan Party, on the whole I wish that 40 members will go, one half from Europe and one half from America or as it may be suitable, there is no definite restriction.
So far the proposal of the Karachi Gujarat Hindu Union and the Brahma Samaj to take our devotees to Africa, if they give return fare we will go to Africa, but I am not very much hopeful of the Indians there. They may be of the same type as they are in England. The difficulty with the Indians is that they are under the impression that they know everything and they have not got to learn anything from us, but factually most of them have lost their original culture and they have to learn so many things from this Krsna Consciousness Movement.
Regarding decreasing the number of copies of KRSNA book ordered by Shyamsundar, no, Shyamsundar must sell at least 2,500 KRSNA books, that is already decided. He can sell them at the best price, it does not matter whether it is the price mentioned on the book cover.
So if you want to see a Spanish edition of BTG, then you go to Spain and open a branch, then we get Spanish edition also--it is not difficult. It is very good news that several new boys and girls have joined the Paris Temple, so utilize all these newcomers--whatever capacity they have got try to utilize it for Krsna's service--that will be good for them and good for us.
Regarding your two questions, the first, Sri Gadadhar is expansion Radharani and Srinivas is the expansion of Narada Muni, or in other words they are the internal and the devotional energy respectively. The second question, Yes, Rupa Goswami is a Gopi by the name of Rupamanjari, but not all the six Goswamis of Vrndavan are Gopis. The following is a list of some of the principle Gopis, the first eight are called Astasakhi:

You can sing individually the names of the Gopis, there is no harm, but when we sing the prayer "Sri radha krsna padan sahaguna Lalita Sri Visakha nitamsca" this includes them all.
Please offer my blessings to your good wife, Madri Dasi, and all the boys and girls at Paris center.
Hope this will meet you in good health.
Your ever well-wisher,