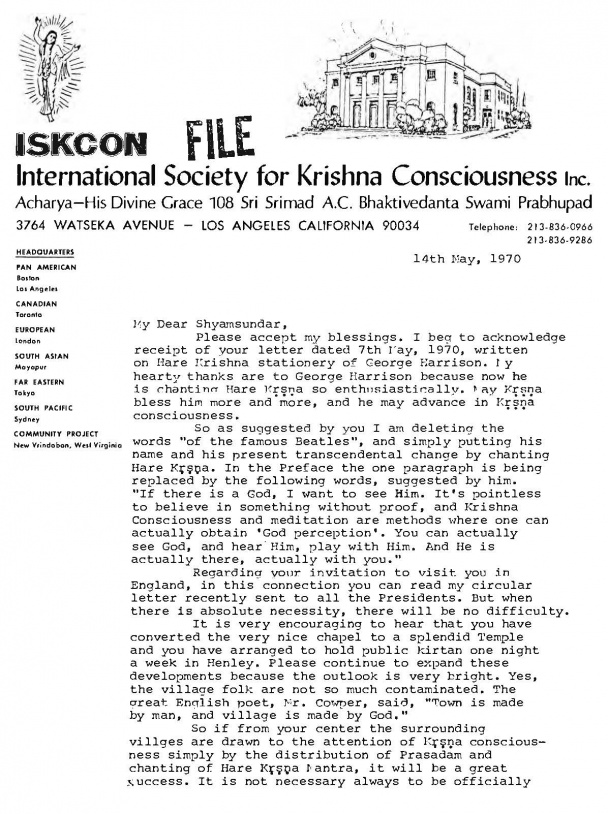 Letter to Shyamsundar (page 1 of 2) 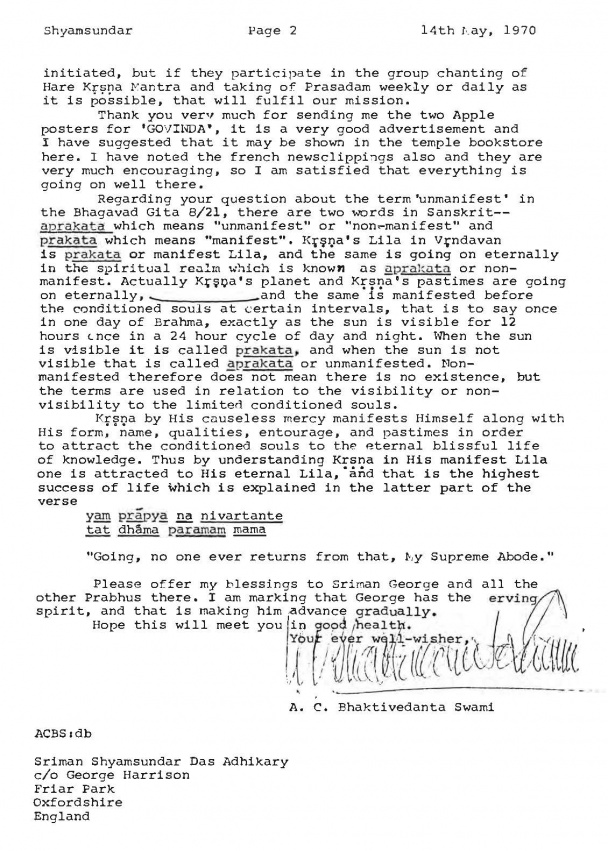 Letter to Shyamsundar (page 2 of 2)

My Dear Shyamsundar,
Please accept my blessings. I beg to acknowledge receipt of your letter dated 7th May, 1970, written on Hare Krishna stationery of George Harrison. My hearty thanks are to George Harrison because now he is chanting Hare Krsna so enthusiastically. May Krsna bless him more and more, and he may advance in Krsna consciousness.
So as suggested by you I am deleting the words "of the famous Beatles", and simply putting his name and his present transcendental change by chanting Hare Krsna. In the Preface the one paragraph is being replaced by the following words, suggested by him. "If there is a God, I want to see Him. It's pointless to believe in something without proof, and Krishna Consciousness and meditation are methods where one can actually obtain 'God perception.' You can actually see God, and hear Him, play with Him. And He is actually there, actually with you."
Regarding your invitation to visit you in England, in this connection you can read my circular letter recently sent to all the Presidents. But when there is absolute necessity, there will be no difficulty.
It is very encouraging to hear that you have converted the very nice chapel to a splendid Temple and you have arranged to hold public kirtan one night a week in Henley. Please continue to expand these developments because the outlook is very bright. Yes, the village folk are not so much contaminated. The great English poet, Mr. Cowper, said, "Town is made by man, and village is made by God."
So if from your center the surrounding villages are drawn to the attention of Krsna consciousness simply by the distribution of Prasadam and chanting of Hare Krsna Mantra, it will be a great success. It is not necessary always to be officially initiated, but if they participate in the group chanting of Hare Krsna Mantra and taking of Prasadam weekly or daily as it is possible, that will fulfill our mission.
Thank you very much for sending me the two Apple posters for 'GOVINDA', it is a very good advertisement and I have suggested that it may be shown in the temple bookstore here. I have noted the french newsclippings also and they are very much encouraging, so I am satisfied that everything is going on well there.
Regarding your question about the term 'unmanifest' in the Bhagavad Gita 8/21, there are two words in Sanskrit--aprakata which means "unmanifest" or "non-manifest" and prakata which means "manifest". Krsna's Lila in Vrndavana is prakata or manifest Lila, and the same is going on eternally in the spiritual realm which is known as aprakata or non-manifest. Actually Krsna's planet and Krsna's pastimes are going on eternally, and the same is manifested before the conditioned souls at certain intervals, that is to say once in one day of Brahma, exactly as the sun is visible for 12 hours once in a 24 hour cycle of day and night. When the sun is visible it is called prakata, and when the sun is not visible that is called aprakata or unmanifested. Nonmanifested therefore does not mean there is no existence, but the terms are used in relation to the visibility or non-visibility to the limited conditioned souls.
Krsna by His causeless mercy manifests Himself along with His form, name, qualities, entourage, and pastimes in order to attract the conditioned souls to the eternal blissful life of knowledge. Thus by understanding Krsna in His manifest Lila one is attracted to His eternal Lila, and that is the highest success of life which is explained in the latter part of the verse

"Going, no one ever returns from that, My Supreme Abode."

Please offer my blessings to Sriman George and all the other Prabhus there. I am marking that George has the serving spirit, and that is making him advance gradually.
Hope this will meet you in good health.
Your ever well-wisher,