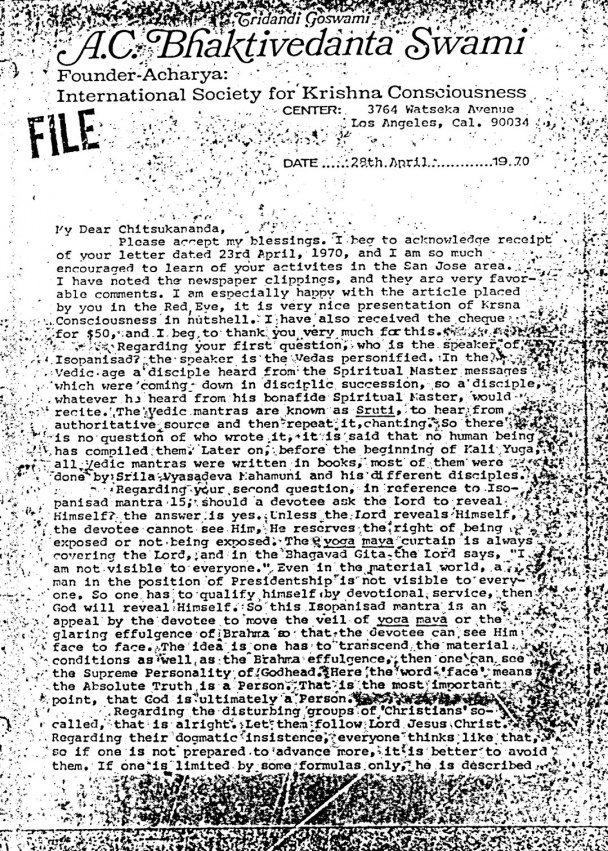 Letter to Chitsukananda (Page 1 of 2) 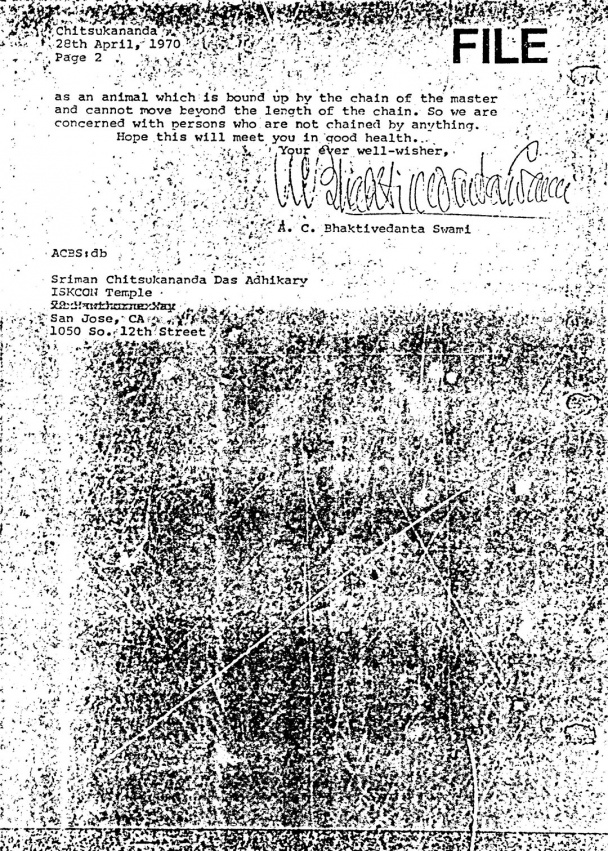 Letter to Chitsukananda (Page 2 of 2)

Please accept my blessings. I beg to acknowledge receipt of your letter dated 23rd April, 1970, and I am so much encouraged to learn of your activities in the San Jose area. I have noted the newspaper clippings, and they are very favorable comments. I am especially happy with the article placed by you in the Red Eye, it is very nice presentation of Krsna Consciousness in nutshell. I have also received the check for $50, and I beg to thank you very much for this.

Regarding your first question, who is the speaker of Isopanisad? The speaker is the Vedas personified. In the Vedic age a disciple heard from the Spiritual Master messages which were coming down in disciplic succession, so a disciple, whatever he heard from his bona fide Spiritual Master, would recite. The Vedic mantras are known as Sruti, to hear from authoritative source and then repeat it, chanting. So there is no question of who wrote it, it is said that no human being has compiled them. Later on, before the beginning of Kali Yuga, all Vedic mantras were written in books, most of them were done by Srila Vyasadeva Mahamuni and his different disciples.

Regarding your second question, in reference to Isopanisad mantra 15, should a devotee ask the Lord to reveal Himself the answer is yes. Unless the Lord reveals Himself, the devotee cannot see Him, He reserves the right of being exposed or not being exposed. The yoga maya curtain is always covering the Lord, and in the Bhagavad-gita the Lord says, "I am not visible to everyone." Even in the material world, a man in the position of Presidentship is not visible to everyone. So one has to qualify himself by devotional service, then God will reveal Himself. So this Isopanisad mantra is an appeal by the devotee to move the veil of yoga maya or the glaring effulgence of Brahma so that the devotee can see Him face to face. The idea is one has to transcend the material conditions as well as the Brahma effulgence, then one can see the Supreme Personality of Godhead. Here the word "face" means the Absolute Truth is a Person. That is the most important point, that God is ultimately a Person.

Regarding the disturbing groups of "Christians" so-called, that is alright. Let them follow Lord Jesus Christ. Regarding their dogmatic insistence, everyone thinks like that, so if one is not prepared to advance more, it is better to avoid them. If one is limited by some formulas only, he is described as an animal which is bound up by the chain of the master and cannot move beyond the length of the chain. So we are concerned with persons who are not chained by anything.