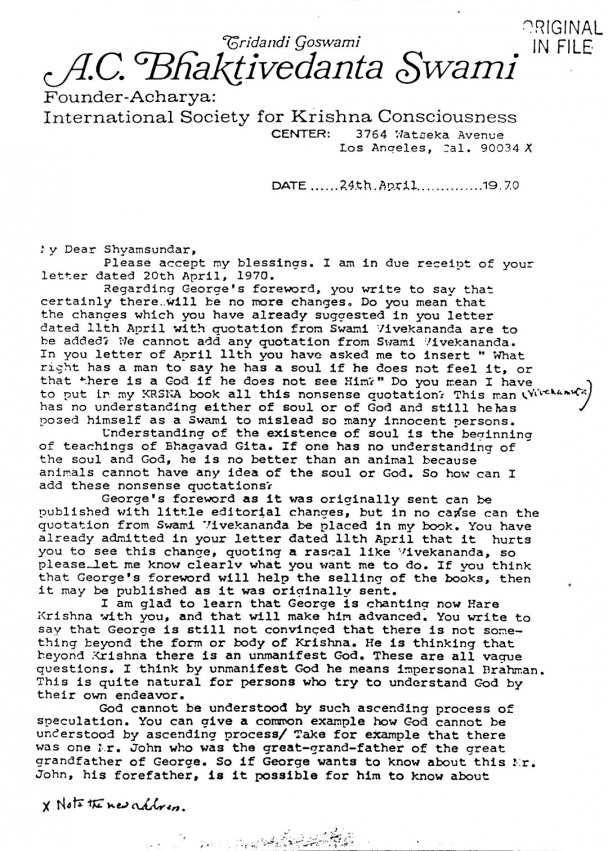 Letter to Shyamsundar (Page 1 of 3) 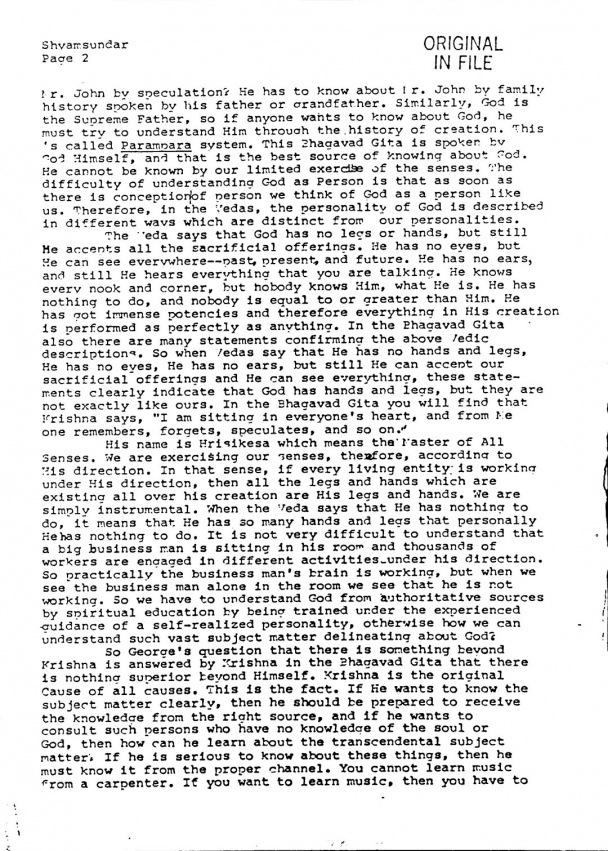 Letter to Shyamsundar (Page 2 of 3) 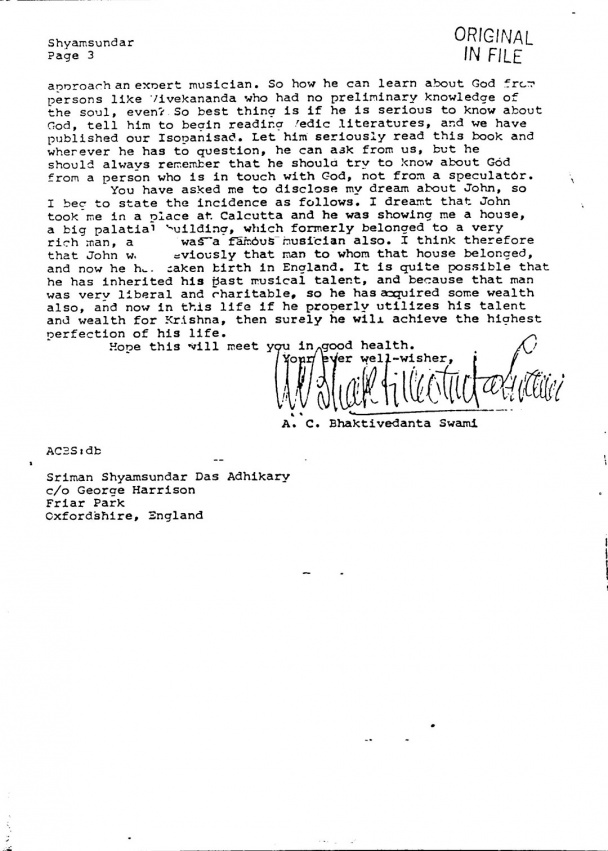 Letter to Shyamsundar (Page 3 of 3)


My Dear Shyamsundar,
Please accept my blessings. I am in due receipt of your letter dated 20th April, 1970.
Regarding George's foreword, you write to say that certainly there will be no more changes. Do you mean that the changes which you have already suggested in you letter dated 11th April with quotation from Swami Vivekananda are to be added? We cannot add any quotation from Swami Vivekananda. In your letter of April 11th you have asked me to insert "What right has a man to say he has a soul if he does not feel it, or that there is a God if he does not see Him?" Do you mean I have to put in my KRSNA book all this nonsense quotation? This man (Vivekananda) [handwritten] has no understanding either of soul or of God and still he has posed himself as a Swami to mislead so many innocent persons.
Understanding of the existence of soul is the beginning of teachings of Bhagavad Gita. If one has no understanding of the soul and God, he is no better than an animal because animals cannot have any idea of the soul or God. So how can I add these nonsense quotations?
George's foreword as it was originally sent can be published with little editorial changes, but in no case can the quotation from Swami Vivekananda be placed in my book. You have already admitted in your letter dated 11th April that it hurts you to see this change, quoting a rascal like Vivekananda, so please let me know clearly what you want me to do. If you think that George's foreword will help the selling of the books, then it may be published as it was originally sent.
I am glad to learn that George is chanting now Hare Krishna with you, and that will make him advanced. You write to say that George is still not convinced that there is not something beyond the form or body of Krishna. He is thinking that beyond Krishna there is an unmanifest God. These are all vague questions. I think by unmanifest God he means impersonal Brahman. This is quite natural for persons who try to understand God by their own endeavor.
God cannot be understood by such ascending process of speculation. You can give a common example how God cannot be understood by ascending process. Take for example that there was one Mr. John who was the great-grand-father of the great-grand-father of George. So if George wants to know about this Mr. John, his forefather, is it possible for him to know about

Mr. John by speculation? He has to know about Mr. John by family history spoken by his father or grandfather. Similarly, God is the Supreme Father, so if anyone wants to know about God, he must try to understand Him through the history of creation. This is called Parampara system. This Bhagavad Gita is spoken by God Himself, and that is the best source of knowing about God. He cannot be known by our limited exercise of the senses. The difficulty of understanding God as person is that as soon as there is conception of person we think of God as a person like us. Therefore, in the Vedas, the personality of God is described in different ways which are distinct from our personalities.
The Veda says that God has no legs or hands, but still He accepts all the sacrificial offerings. He has no eyes, but He can see everywhere—past, present, and future. He has no ears, and still He hears everything that you are talking. He knows every nook and corner, but nobody knows Him, what He is. He has nothing to do, and nobody is equal to or greater than Him. He has got immense potencies and therefore everything in His creation is performed as perfectly as anything. In the Bhagavad-gita also there are many statements confirming the above Vedic descriptions. So when Vedas say that He has no hands and legs, He has no eyes, He has no ears, but still He can accept our sacrificial offerings and He can see everything, these statements clearly indicate that God has hands and legs, but they are not exactly like ours. In the Bhagavad Gita you will find that Krishna says "I am sitting in everyone's heart, and from Me one remembers, forgets, speculates, and so on."
His name is Hrisikesa which means the Master of All Senses. We are exercising our senses, therefore, according to His direction. In that sense, if every living entity is working under His direction, then all the legs and hands which are existing all over his creation are His legs and hands. We are simply instrumental. When the Veda says that He has nothing to do, it means that He has so many hands and legs that personally He has nothing to do. It is not very difficult to understand that a big business man is sitting in his room and thousands of workers are engaged in different activities under his direction. So practically the business man's brain is working, but when we see the business man alone in the room we see that he is not working. So we have to understand God from authoritative sources by spiritual education by being trained under the experienced guidance of a self-realized personality, otherwise how we can understand such vast subject matter delineating about God?
So George's question that there is something beyond Krishna is answered by Krishna in the Bhagavad Gita that there is nothing superior beyond Himself. Krishna is the original Cause of all causes. This is the fact. If He wants to know the subject matter clearly, then he should be prepared to receive the knowledge from the right source, and if he wants to consult such persons who have no knowledge of the soul or God, then how can he learn about the transcendental subject matter? If he is serious to know about these things, then he must know it from the proper channel. You cannot learn music from a carpenter. If you want to learn music, then you have to approach an expert musician. So how he can learn about God from persons like Vivekananda who had no preliminary knowledge of the soul, even? So best thing is if he is serious to know about God, tell him to begin reading Vedic literatures, and we have published our Isopanisad. Let him seriously read this book and whenever he has to question, he can ask from us, but he should always remember that he should try to know about God from a person who is in touch with God, not from a speculator.
You have asked me to disclose my dream about John, so I beg to state the incident as follows. I dream that John took me in a place at Calcutta and he was showing me a house, a big palatial building, which formerly belonged to a very rich man, and he was a famous musician also. I think therefore that John was previously that man to whom that house belonged, and now he has taken birth in England. It is quite possible that he has inherited his past musical talent, and because that man was very liberal and charitable, so he has acquired some wealth also, and now in this life if he properly utilizes his talent and wealth for Krishna, then surely he will achieve the highest perfection of his life.
Hope this will meet you in good health.
Your ever well-wisher,