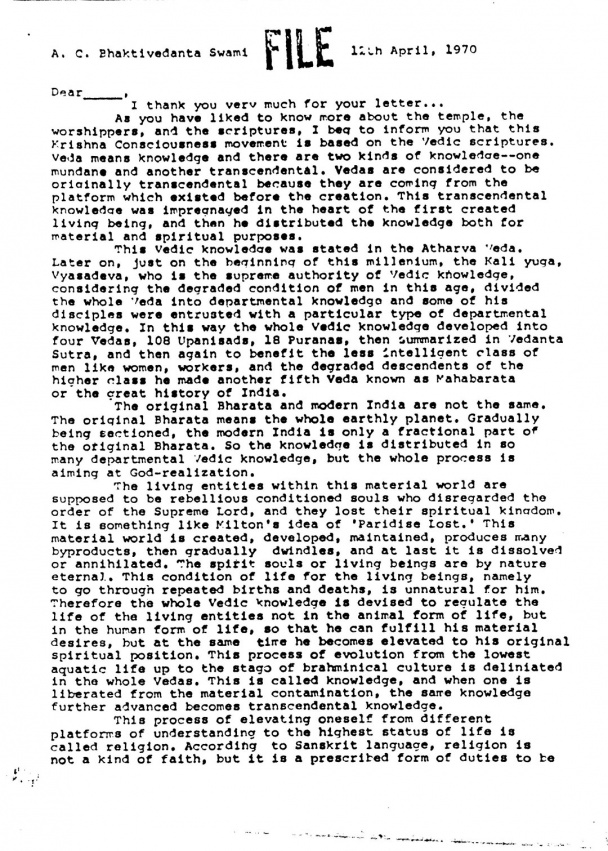 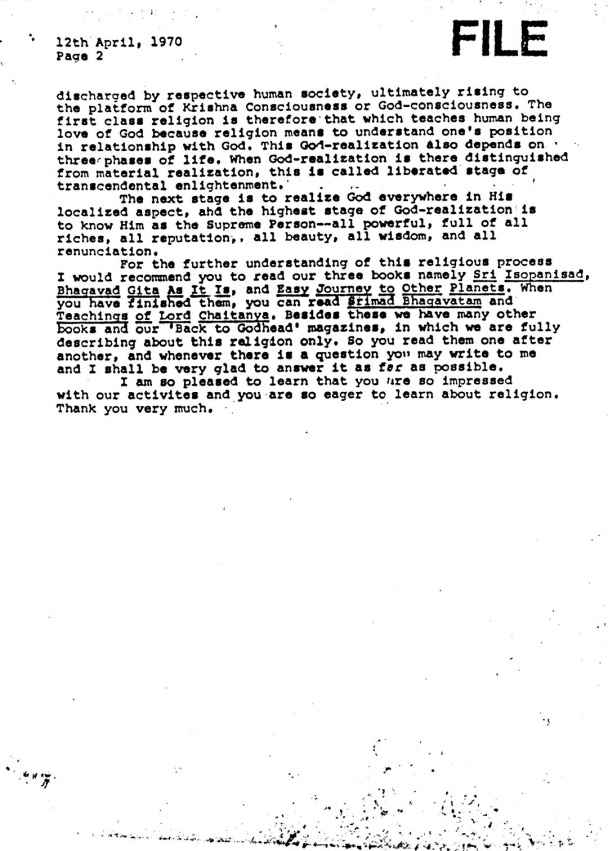 Dear ____,
I thank you very much for your letter . . .
As you have liked to know more about the temple, the worshippers, and the scriptures, I beg to inform you that this Krishna Consciousness movement is based on the Vedic scriptures. Veda means knowledge and there are two kinds of knowledge--one mundane and another transcendental. Vedas are considered to be originally transcendental because they are coming from the platform which existed before the creation. This transcendental knowledge was impregnated in the heart of the first created living being, and then he distributed the knowledge both for material and spiritual purposes.
This Vedic knowledge was stated in the Atharva Veda. Later on, just on the beginning of this millenium, the Kali yuga, Vyasadeva, who is the supreme authority of Vedic knowledge, considering the degraded condition of men in this age, divided the whole Veda into departmental knowledge and some of his disciples were entrusted with a particular type of departmental knowledge. In this way the whole Vedic knowledge developed into four Vedas, 108 Upanisads, 18 Puranas, then summarized in Vedanta Sutra, and then again to benefit the less intelligent class of men like women, workers, and the degraded descendants of the higher class he made another fifth Veda known as Mahabharata or the great history of India.
The original Bharata and modern India are not the same. The original Bharata means the whole earthly planet. Gradually being sectioned, the modern India is only a fractional part of the original Bharata. So the knowledge is distributed in so many departmental Vedic knowledge, but the whole process is aiming at God-realization.
The living entities within this material world are supposed to be rebellious conditioned souls who disregarded the order of the Supreme Lord, and they lost their spiritual kingdom. It is something like Milton's idea of 'Paradise Lost.' This material world is created, developed, maintained, produces many by-products, then gradually dwindles, and at last it is dissolved or annihilated. The spirit souls or living beings, are by nature eternal. This condition of life for the living beings are by nature eternal. This condition of life for the living beings, namely to go through repeated births and deaths, is unnatural for him. Therefore the whole Vedic knowledge is devised to regulate the life of the living entities not in the animal form of life, but in the human form of life, so that he can fulfill his material desires, but at the same time he becomes elevated to his original spiritual position. This process of evolution from the lowest aquatic life up to the stage of brahminical culture is delineated in the whole Vedas. This is called knowledge, and when one is liberated from the material contamination, the same knowledge further advanced becomes transcendental knowledge.
This process of elevating oneself from different platforms of understanding to the highest status of life is called religion. According to Sanskrit language, religion is not a kind of faith, but it is a prescribed form of duties to be discharged by respective human society, ultimately rising to the platform of Krishna Consciousness or God-consciousness. The first class religion is therefore that which teaches human being love of God because religion means to understand one's position in relationship with God. This God-realization also depends on three phases of life. When God-realization is there distinguished from material realization, this is called liberated stage of transcendental enlightenment.
The next stage is to realize God everywhere in His localized aspect, and the highest stage of God-realization is to know Him as the Supreme Person--all powerful, full of all riches, all reputation, all beauty, all wisdom, and all renunciation.
For the further understanding of this religious process I would recommend you to read our three books namely Sri Isopanisad, Bhagavad Gita As It Is, and Easy Journey to Other Planets. When you have finished them, you can read Srimad Bhagavatam and Teachings of Lord Chaitanya. Besides these we have many other books and our 'Back to Godhead' magazines, in which we are fully describing about this religion only. So you read them one after another, and whenever there is a question you may write to me and I shall be very glad to answer it as far as possible.
I am so pleased to learn that you are so impressed with our activities and you are so eager to learn about religion. Thank you very much.