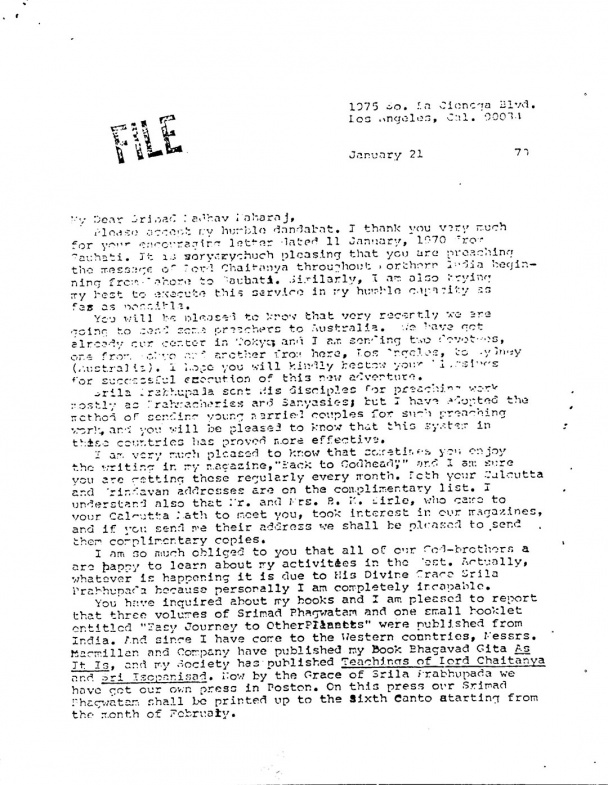 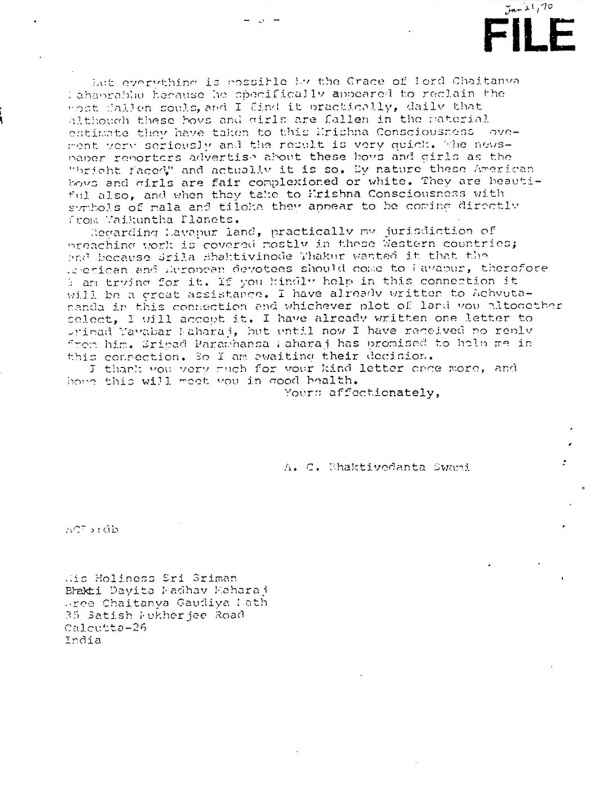 
My Dear Sripad Madhav Maharaj,
Please accept my humble dandabat. I thank you very much for your encouraging letter dated 11 January, 1970 from Gauhati. It is so very much pleasing that you are preaching the message of Lord Chaitanya throughout Northern India beginning from Lahore to Gauhati. Similarly, I am also trying my best to execute this service in my humble capacity as far as possible.
You will be pleased to know that very recently we are going to send some preachers to Australia. We have got already our center in Tokyo; and I am sending two devotees, one from Tokyo; and another from here, Los Angeles, to Sydney (Australia). I hope you will kindly bestow your blessings for successful execution of this new adventure.
Srila Prabhupada sent His disciples for preaching work mostly as Brahmacharies and Sannyasies; but I have adopted the method of sending young married couples for such preaching work, and you will be pleased to know that this system in these countries has proved more effective.
I am very much pleased to know that sometimes you enjoy the writing in my magazine, "Back to Godhead," and I am sure you are getting these regularly every month. Both your Calcutta and Vrindavan addresses are on the complimentary list. I understand also that Mr. and Mrs. B. K. Dirle, who came to your Calcutta Math to meet you, took interest in our magazines, and if you send me their address we shall be pleased to send them complimentary copies.
I am so much obliged to you that all of our God-brothers are happy to learn about my activities in the West. Actually, whatever is happening it is due to His Divine Grace Srila Prabhupada because personally I am completely incapable.
You have inquired about my books and I am pleased to report that three volumes of Srimad Bhagwatam and one small booklet entitled "Easy Journey to Other Planets" were published from India. And since I have come to the Western countries, Messrs. MacMillan and Company have published my book Bhagavad Gita As It Is, and my Society has published Teachings of Lord Chaitanya and Sri Isopanisad. Now by the Grace of Srila Prabhupada we have got our own press in Boston. On this press our Srimad Bhagwatam shall be printed up to the Sixth Canto starting from the month of February.
But everything is possible by the Grace of Lord Chaitanya Mahaprabhu because he specifically appeared to reclaim the most fallen souls, and I find it practically, daily that although these boys and girls are fallen in the material estimate they have taken to this Krishna Consciousness Movement very seriously and the result is very quick. The newspaper reporters advertise about these boys and girls as the "bright faced," and actually it is so. By nature these American boys and girls are fair complexioned or white. They are beautiful also, and when they take to Krishna Consciousness with symbols of mala and tilaka they appear to be coming directly from Vaikuntha Planets.
Regarding Mayapur land, practically my jurisdiction of preaching work is covered mostly in these Western countries; and because Srila Bhaktivinode Thakur wanted it that the American and European devotees should come to Mayapur, therefore I am trying for it. If you kindly help in this connection it will be a great assistance. I have already written to Achyutananda in this connection and whichever plot of land you altogether select, I will accept it. I have already written one letter to Sripad Yayabar Maharaj, but until now I have received no reply from him. Sripad Paramahamsa Maharaj has promised to help me in this connection. So I am awaiting their decision.
I thank you very much for your kind letter once more, and hope this will meet you in good health.
Yours affectionately,