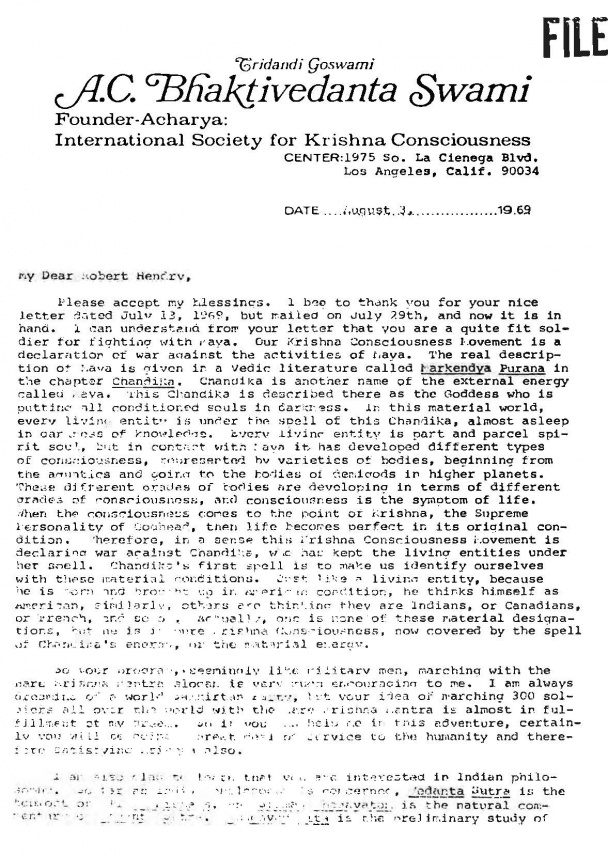 Letter to Robert Hendry (Page 1 of 3) 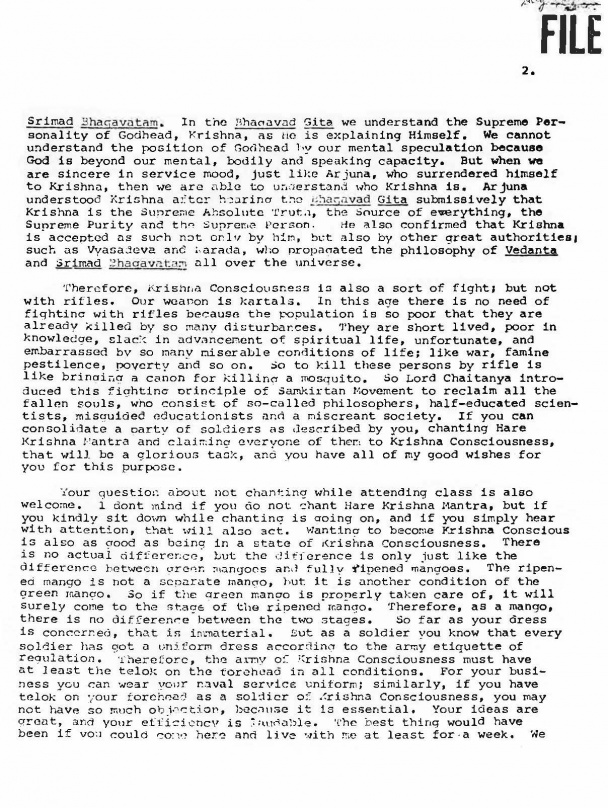 Letter to Robert Hendry (Page 2 of 3) 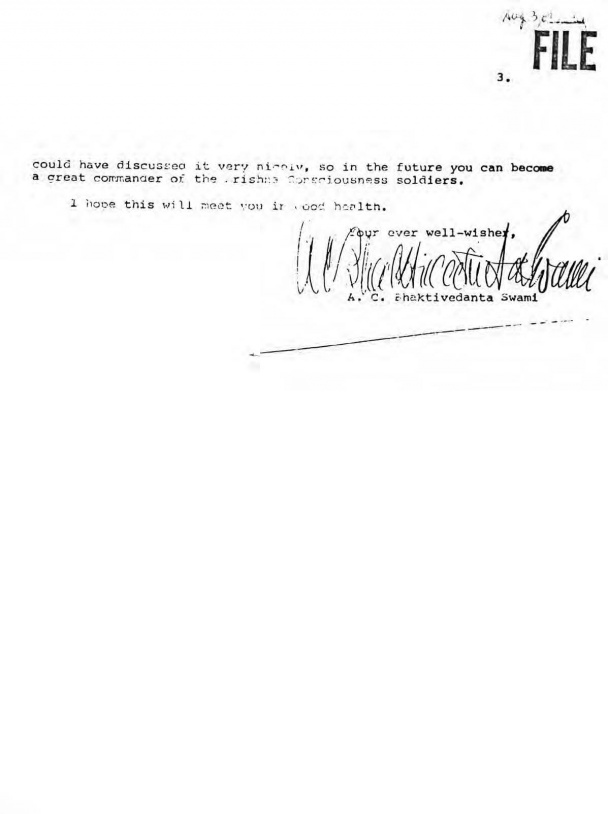 Letter to Robert Hendry (Page 3 of 3)

Please accept my blessings. I beg to thank you for your nice letter dated July 13, 1969, but mailed on July 29th, and now it is in hand. I can understand from your letter that you are a quite fit soldier for fighting with Maya. Our Krishna Consciousness Movement is a declaration of war against the activities of Maya. The real description of Maya is given in a Vedic literature called Markendeya Purana in the chapter Chandika. Chandika is another name of the external energy called Maya. This Chandika is described there as the Goddess who is putting all conditioned souls in darkness. In this material world, every living entity is under the spell of this Chandika, almost asleep in darkness of knowledge. Every living entity is part and parcel spirit soul, but in contact with Maya it has developed different types of consciousness, represented by varieties of bodies, beginning from the aquatics and going to the bodies of demigods in higher planets. These different grades of bodies are developing in terms of different grades of consciousness and consciousness is the symptom of life. When the consciousness comes to the point of Krishna, the Supreme Personality of Godhead, then life becomes perfect in its original condition. Therefore, in a sense this Krishna Consciousness Movement is declaring war against Chandika, who has kept the living entities under her spell. Chandika's first spell is to make us identify ourselves with these material conditions. Just like a living entity, because he is born and brought up in American condition, he thinks himself as American, similarly, others are thinking they are Indians, or Canadians, or French and so on. Actually, one is none of these material designations, but he is pure Krishna Consciousness, now covered by the spell of Chandika's energy, or the material energy.

So your program, seemingly like military men, marching with the Hare Krishna Mantra slogan is very very encouraging to me. I am always dreaming of a world Sankirtan Party, but your idea of marching 300 soldiers all over the world with the Hare Krishna Mantra is almost in fulfillment of my dream. So if you can believe in this adventure, certainly you will be doing a great deal of service to the humanity and therefore satisfying Krishna also.

I am also glad to learn that you are interested in Indian philosophy. So far as Indian philosophy is concerned, Vedanta Sutra is the topmost or ____, and Srimad Bhagavatam is the natural commentary on Vedanta Sutra. Bhagavad Gita is the preliminary study of Srimad Bhagavatam. In the Bhagavad Gita we understand the Supreme Personality of Godhead, Krishna as He is explaining Himself. We cannot understand the position of Godhead by our mental speculation because God is beyond our mental, bodily and speaking capacity. But when we are sincere in service mood, just like Arjuna, who surrendered himself to Krishna, then we are able to understand who Krishna is. Arjuna understood Krishna after hearing the Bhagavad Gita submissively that Krishna is the Supreme Absolute Truth, the Source of everything, the Supreme Purity and the Supreme Person. He also confirmed that Krishna is accepted as such not only by him, but also by other great authorities; such as Vyasadeva and Narada, who propagated the philosophy of Vedanta and Srimad Bhagavatam all over the universe.

Therefore, Krishna Consciousness is also a sort of fight; but not with rifles. Our weapon is kartals. In this age there is no need of fighting with rifles because the population is so poor that they are already killed by so many disturbances. They are short lived, poor in knowledge, slack in advancement of spiritual life, unfortunate, and embarrassed by so many miserable conditions of life; like war, famine pestilence, poverty and so on. So to kill these persons by rifle is like bringing a cannon for killing a mosquito. So Lord Chaitanya introduced this fighting principle of Sankirtan Movement to reclaim all the fallen souls, who consist of so-called philosophers, half-educated scientists, misguided educationists and a miscreant society. If you can consolidate a party of soldiers as described by you, chanting Hare Krishna Mantra and claiming everyone of them to Krishna Consciousness, that will be a glorious task, and you have all of my good wishes for you for this purpose.

Your question about not chanting while attending class is also welcome. I don't mind if you do not chant Hare Krishna Mantra, but if you kindly sit down while chanting is going on, and if you simply hear with attention, that will also act. Wanting to become Krishna Conscious is also as good as being in a state of Krishna Consciousness. There is no actual difference, but the difference is only just like the difference between green mangoes and fully ripened mangoes. The ripened mango is not a separate mango, but it is another condition of the green mango. So if the green mango is properly taken care of, it will surely come to the stage of the ripened mango. Therefore, as a mango, there is no difference between the two stages. So far as your dress is concerned, that is immaterial. But as a soldier you know that every soldier has got a uniform dress according to the army etiquette of regulation. Therefore, the army of Krishna Consciousness must have at least the tilak on the forehead in all conditions. For your business you can wear your naval service uniform; similarly, if you have tilak on your forehead as a soldier of Krishna Consciousness, you may not have so much objection, because it is essential. Your ideas are great, and your efficiency is laudable. The best thing would have been if you could come here and live with me at least for a week. We could have discussed it very nicely, so in the future you can become a great commander of the Krishna Consciousness soldiers.