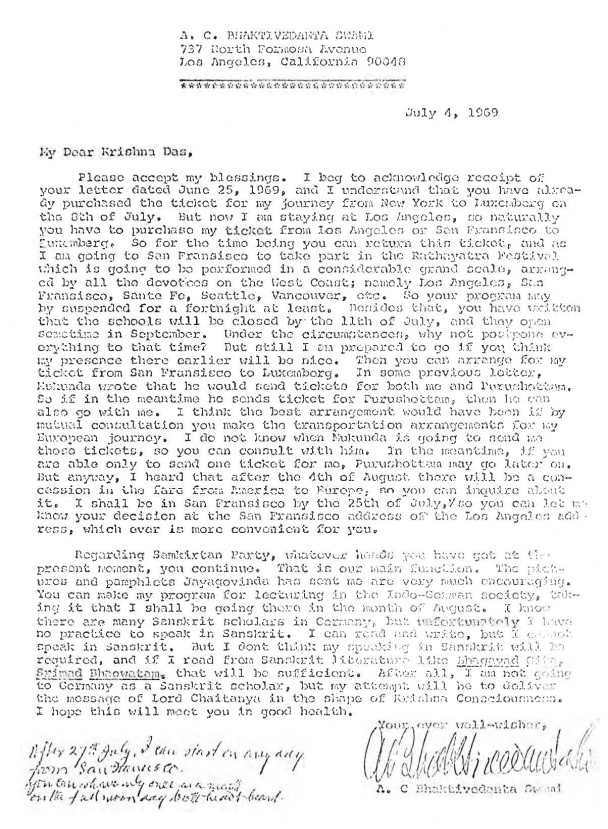 Please accept my blessings. I beg to acknowledge receipt of your letter dated June 25, 1969, and I understand that you have already purchased the ticket for my journey from New York to Luxembourg on the 8th of July. But now I am staying at Los Angeles, so naturally you have to purchase my ticket from Los Angeles or San Francisco to Luxembourg. So for the time being you can return this ticket, and as I am going to San Francisco to take part in the Rathayatra Festival which is going to be performed in a considerable grand scale, arranged by all the devotees on the West Coast; namely Los Angeles, San Francisco, Sante Fe, Seattle, Vancouver, etc. So your program may be suspended for a fortnight at least. Besides that, you have written that the schools will be closed by the 11th of July,* and they open sometime in September. Under the circumstances, why not postpone everything to that time? But still I am prepared to go if you think my presence there earlier will be nice. Then you can arrange for my ticket from San Francisco to Luxembourg. In some previous letter, Mukunda wrote that he would send tickets for both me and Purushottam. So if in the meantime he sends ticket for Purusottam, then he can also go with me. I think the best arrangement would have been if by mutual consultation you make the transportation arrangements for my European journey. I do not know when Mukunda is going to send me those tickets, so you can consult with him. In the meantime, if you are able only to send one ticket for me, Purushottam may go later on. But anyway, I heard that after the 4th of August there will be a concession in the fare from America to Europe, so you can inquire about it. I shall be in San Francisco by the 25th of July, so you can let me know your decision at the San Francisco address or the Los Angeles address, which ever is more convenient for you.

Regarding Sankirtan Party, whatever heads you have got at the present moment, you continue. That is our main function. The pictures and pamphlets Jaya Govinda has sent me are very much encouraging. You can make my program for lecturing in the Indo-German society, taking it that I shall be going there in the month of August. I know there are many Sanskrit scholars in Germany, but unfortunately I have no practice to speak in Sanskrit. I can read and write, but I cannot speak in Sanskrit. But I don't think my speaking in Sanskrit will be required, and if I read from Sanskrit literature like Bhagavad Gita, Srimad Bhagavatam, that will be sufficient. After all, I am not going to Germany as a Sanskrit scholar, but my attempt will be to deliver the message of Lord Chaitanya in the shape of Krishna Consciousness. I hope this will meet you in good health.

* After 27th July, I can start on any day from San Francisco. You can shave once in a month on the full moon day with head & beard.[handwritten]