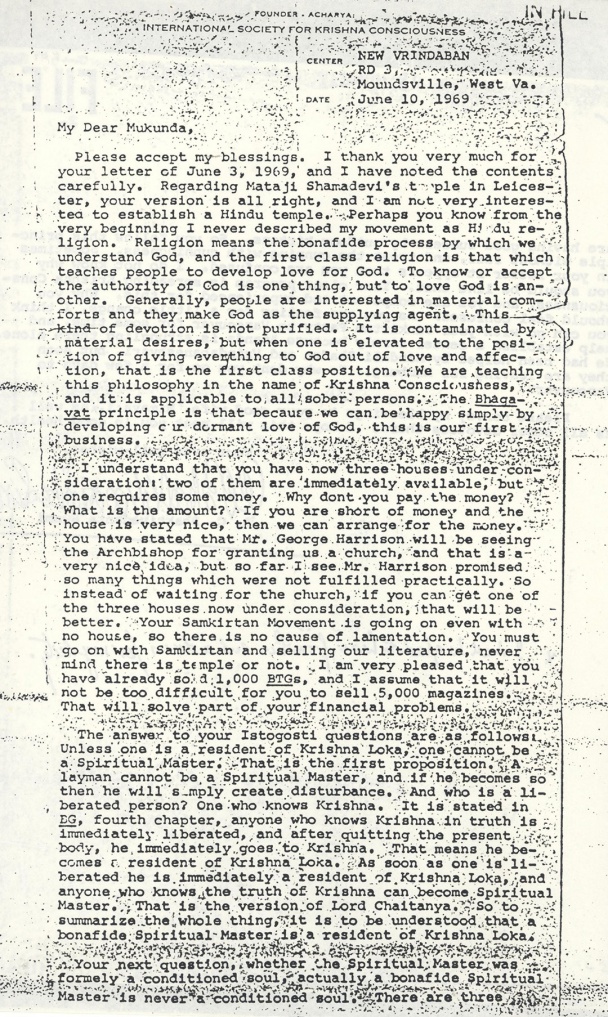 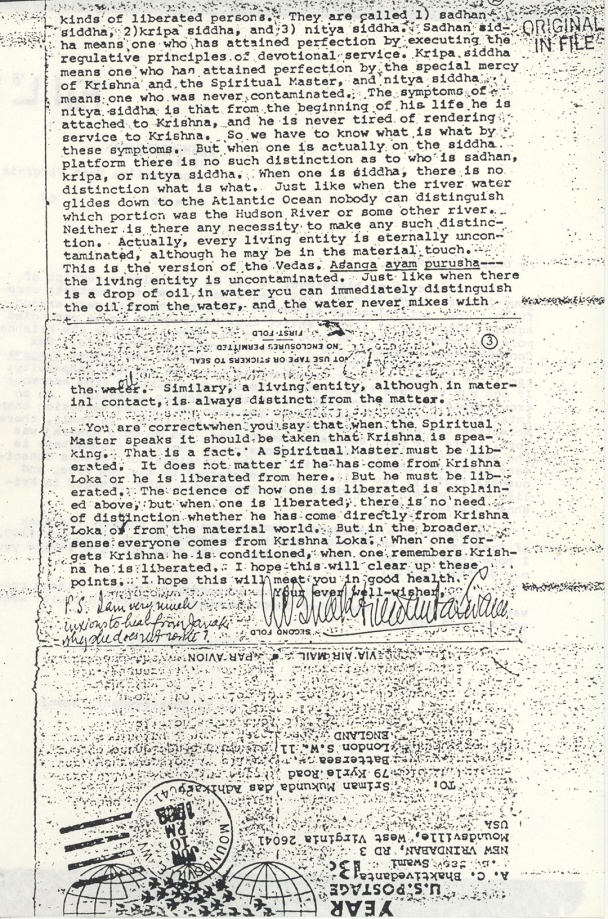 Please accept my blessings. I thank you very much for your letter of June 3, 1969, and I have noted the contents carefully. Regarding Mataji Shamadevi's temple in Leicester, your version is all right, and I am not very interested to establish a Hindu temple. Perhaps you know from the very beginning I never described my movement as Hindu religion. Religion means the bonafide process by which we understand God, and the first class religion is that which teaches people to develop love for God. To know or accept the authority of God is one thing, but to love God is another. Generally, people are interested in material comforts and they make God as the supplying agent. This kind of devotion is not purified. It is contaminated by material desires, but when one is elevated to the position of giving everything to God out of love and affection, that is the first class position. We are teaching this philosophy in the name of Krishna Consciousness, and it is applicable to all sober persons. The Bhagavat principle is that because we can be happy simply by developing our dormant love of God, this is our first business.

I understand that you have now three houses under consideration: two of them are immediately available, but one requires some money. Why don't you pay the money? What is the amount? If you are short of money and the house is very nice, then we can arrange for the money. You have stated that Mr. George Harrison will be seeing the Archbishop for granting us a church, and that is a very nice idea, but so far I see Mr. Harrison promised so many things which were not fulfilled practically. So instead of waiting for the church, if you can get one of the three houses now under consideration, that will be better. Your Samkirtan Movement is going on even with no house, so there is no cause of lamentation. You must go on with Samkirtan and selling our literature, never mind there is temple or not. I am very pleased that you have already sold 1,000 BTGs, and I assume that it will not be too difficult for you to sell 5,000 magazines. That will solve part of your financial problems.

Your next question, whether the Spiritual Master was formerly a conditioned soul, actually a bona fide Spiritual Master is never a conditioned soul. There are three kinds of liberated persons. They are called 1) sadhan siddha, 2) kripa siddha, and 3) nitya siddha. Sadhan siddha means one who has attained perfection by executing the regulative principles of devotional service. Kripa siddha means one who has attained perfection by the special mercy of Krishna and the Spiritual Master, and nitya siddha means one who was never contaminated. The symptoms of nitya siddha is that from the beginning of his life he is attached to Krishna, and he is never tired of rendering service to Krishna. So we have to know what is what by these symptoms. But when one is actually on the siddha platform there is no such distinction as to who is sadhan, kripa, or nitya siddha. When one is siddha, there is no distinction what is what. Just like when the river water glides down to the Atlantic Ocean nobody can distinguish which portion was the Hudson River or some other river. Neither is there any necessity to make any such distinction. Actually, every living entity is eternally uncontaminated, although he may be in the material touch. This is the version of the Vedas. Asanga ayam purusha—the living entity is uncontaminated. Just like when there is a drop of oil in water you can immediately distinguish the oil from the water, and the water never mixes with the oil [handwritten]. Similarly, a living entity, although in material contact, is always distinct from the matter.

P.S. I am very much anxious to hear from Janaki why she does not write?[handwritten]