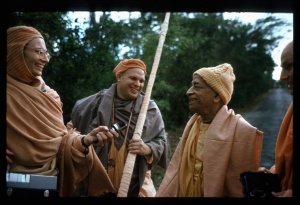 Prabhupāda: It is stated, cātur-varṇyaṁ mayā sṛṣṭaṁ guṇa-karma-vibhāgaśaḥ (BG 4.13). The Lord says that, "The four divisions of social orders—namely the brahmins, the kṣatriyas, the vaiśyas, śūdras—these divisions were created by Me," and guṇa-karma-vibhāgaśaḥ, "not by birthright but by identification of qualities and actual work." In the similar way, in the Śrīmad-Bhāgavatam also, it is stated that:

The whole Vedic system is to pick up qualitative person. There is no such thing as birthright qualification. And Śrīdhara Swami, the greatest commentator on Śrīmad-Bhāgavatam, he has commented on this verse:

So this Kṛṣṇa consciousness movement is accepting persons who are developing the qualities of brahmins and Vaiṣṇava. It is not that because they were not born in India and not born in Hindu family . . . it is not . . . there is no such consideration. Anyone. Ye kṛṣṇa-tattva-vettā sei guru haya. Caitanya Mahāprabhu has said that:

It doesn't matter whether a man is a śūdra or a brahmin or a sannyāsī or a householder. It doesn't matter. If he actually knows the science of God, kṛṣṇa-tattva . . . Kṛṣṇa means God, the Supreme Lord, and tattva means scientific knowledge. Yei kṛṣṇa-tattva-vetta sei guru haya.

So what is the idea of Vedic principle? The Lord says, vedaiś ca sarvair aham eva vedyaḥ (BG 15.15). By different scriptures, Vedic literatures—the four Vedas, the Upaniṣads the Vedānta-sūtra, and any other literature—Rāmāyaṇa, Mahābhārata . . . there are so many allied scriptures. The whole aim is, target is, Kṛṣṇa. Vedaiś ca sarvair aham eva vedyam. So actually the Vedas are searching Kṛṣṇa. In the Brahma-saṁhitā also it is stated:

So this merciful benediction was given by Lord Kṛṣṇa, er, by Lord Caitanya Mahāprabhu. He is incarnation of Kṛṣṇa. Kṛṣṇa-varṇaṁ tviṣākṛṣṇam (SB 11.5.32). He is Kṛṣṇa. Categorically, He is Kṛṣṇa, or chanting Kṛṣṇa. But by complexion He is akṛṣṇa. Tviṣākṛṣṇam. So He gave us this greatest benediction, that you simply chant Hare Kṛṣṇa mantra and you get all knowledge.

The greatest impediment of acquiring knowledge is congestion of our heart with dirty things. Lord Caitanya says that if you chant without any offense, very nicely, then your heart becomes cleansed of all dirty things. Ceto-darpaṇa-mārjanaṁ bhava-mahā-dāvāgni-nirvāpaṇam (CC Antya 20.12, Śikṣāṣṭaka 1). And then you are liberated. Brahma-bhūtaḥ prasannātmā na śocati (BG 18.54).

So this Kṛṣṇa consciousness movement is based on Lord Caitanya's teaching. We have published the book Teachings of Lord Caitanya, and teachings of the Bhagavad-gītā. It is not a new thing. Of course, in this country it is being presented for the last two years, but the thing is not new. It is the oldest because, if we take the version of Bhagavad-gītā, Lord (Kṛṣṇa) says, imaṁ vivasvate yogaṁ proktavān aham avyayam (BG 4.1) "This yoga system, Bhagavad-gītā, was spoken by Me to Vivasvān, the sun-god." Vivasvān manave prāha: "And the sun-god said to his son Manu." Manur ikṣvākave 'bravīt. Evaṁ paramparā-prāpta (BG 4.2)

"In this way it is coming." Sa kaleneha yogo naṣṭaḥ parantapa: "But unfortunately that link has been broken; therefore I am speaking again to you the old philosophy, yoga system, Bhagavad-gītā, unto you, Arjuna." "Why You are speaking to me? I am not a Vedāntist. I am not a sannyāsī. I am not even brahmin. Why You want to teach me?" Bhakto 'si: "Because you are My devotee."

Therefore the first qualification of understanding the Vedas or Bhagavad-gītā is to become a devotee of Kṛṣṇa; otherwise it is blocked. Just like if you take a bottle of honey and lick it on the bottle, you won't get the taste. It has to be opened, who has got the key. Then you get the taste of the honey.

So Bhagavad-gītā cannot be understood by academic scholarship. It is not possible, the same bottle-licking. But it has to be opened by the devotee, just like Arjuna opened it—paraṁ brahma paraṁ dhāma pavitraṁ paramaṁ bhavān, puruṣaṁ śāśvatam ādyam (BG 10.12). He understood Kṛṣṇa. So we have to follow the opener of the bottle, honey bottle. Then you will taste what is Bhagavad-gītā.

So this Kṛṣṇa consciousness movement is to purify the human society. And the purification process, simply by chanting, is sufficient. But still, our Gosvāmīs, they have given us some ritualistic ceremonies. That will help the process of purification.

Sacrifice, offering, these things are there. But the main thing is chanting Hare Kṛṣṇa mantra. That is sufficient. So in our Society we want to establish divine society. Therefore there is need of all classes of men and all classes of social orders.

And in this age, because everyone is after employment—without employment he cannot survive—therefore it is said, kalau śūdra sambhava. In the Kali-yuga . . . a brahmin is not expected to serve anyone. A kṣatriya is not expected to serve anyone, nor the vaiśyas. Only the śūdras. So kalau śūdra sambhava. Therefore actually there is no Vedic ritualistic performance for the śūdras. It is meant for the brahmins only.

But there is pāñcarātrikī-viddhi for this age, when śūdras can be elevated to the position of brahmin or Vaiṣṇava by the Vaiṣṇava-viddhi. That viddhi is a voluminous book by Sanātana Gosvāmī. But there is everything: how a brahmacārī will live, how a gṛhastha will live, how a vānaprastha will live. The summary is being practiced. And we are holding now, today, two ceremonies. Some of the boys and girls will be initiated, primarily, and one couple will be married.

So according to Hindu rites, there are many kinds of marriage, eight kinds of marriages. So in this age, as we find in the Śrīmad-Bhāgavatam, marriage can be performed simply by agreement. Svīkāram eva hi udvāhe. That is sufficient. And actually it is being carried on in every country.

The boys and girls go to a magistrate and give their statement and agree. That is marriage. Here also the same principle will be carried under some Vaiṣṇava rites, chanting Hare Kṛṣṇa, offering prayers to the ācāryas and the Deities.

So we have got all the Vedic arrangement, varṇāśrama-dharma, but our only aim is to preach Kṛṣṇa consciousness, to understand the science of Kṛṣṇa. It doesn't matter whether one is householder or a sannyāsī or a brahmacārī or a brahmin or kṣatriya or a vaiśya, śūdra. Sva-karmaṇā tam abhyarcya saṁsiddhiṁ labhate parām (BG 18.46) Everyone should engage his energy to satisfy the Supreme Lord. That is saṁsiddhir hari-toṣaṇam.

But whatever particular duty you may have, just try to see whether by your duty this Supreme Lord is satisfied. Then it is perfect. Svanuṣṭhitasya dharmasya saṁsiddhir hari-toṣaṇam. That is the test, if you have satisfied Kṛṣṇa through His representative. Yasya prasādād bhagavat-prasādaḥ. Just like we work in some big establishment, and if we can satisfy our immediate boss, that is the satisfaction of the whole company. You haven't got to see whether all the members of the company have become satisfied. Simply the immediate boss under which you are working, if he is satisfied, then you know the company is satisfied, because he will submit the report of his work.

He is trying to help you. And when you are actually taking the advantage of that help, and if you are engaged with love and affection in the transcendental service of the Lord, then you can talk with God from within.

God is within you. You haven't got to find out God in so many places. Anywhere you can sit down. But if you are sincere, if you are actually wanting to offer your service to the Lord—teṣāṁ satata-yuktānāṁ bhajatāṁ prīti-pūrvakam, dadāmi buddhi-yogaṁ tam (BG 10.10) He will give you intelligence. Simply we have to become sincere servitor.

So it doesn't matter whether one is householder or a brahmacārī or sannyāsī; he has to become first of all sincere servitor of the Lord. Then everything is complete. The Lord is within you. He will give you all knowledge, all enlightenment, all dictation, and He will make your life progressive. Ādau śraddhā tataḥ sādhu-saṅgaḥ tato bhajana-kriyā, anartha-nivṛttiḥ syāt tato niṣṭhā tato rucis tato bhāvas tato prema (CC Madhya 23.14-15). In this way your life will be sublime.

Yaṁ labdhvā cāparaṁ lābhaṁ manyate nādhikaṁ tataḥ (BG 6.22). And if you can contact the Supreme Personality of Godhead by some way or other by discharge of this devotional service in any position, never mind, then you will feel no more profit. Everyone in the material world, they are working hard day and night for some profit.

But if you can be engaged in the service of the Lord, you will feel that you are so much profited that you will say, svāmin kṛtārtho 'smi varaṁ na yāce (CC Madhya 22.42) "I don't want any more profit. I have got all the profits now. I am fully satisfied." That is required. Yayātmā suprasīdati. Sa vai puṁsāṁ paro dharmo yato bhaktir adhokṣaje (SB 1.2.6). You can . . . if you can develop that stage of life, yato bhaktir adhokṣaje . . . adhokṣaje. The Lord is beyond your sensual perception; therefore He is called Adhokṣaja. Avāṅ-manasā gocaraḥ.

Man-manā bhava mad-bhakto mad-yājī māṁ namaskuru (BG 18.65). So the aim of life should be to become a pure devotee of the Lord. Then your life is successful. In whatever condition you may be, it doesn't matter. You will be situated in the highest stage.

If you are situated in that position, then if you are put into the test of severe difficulties, you will not be moved. You will be steady. Na vicālyate.

Just like we have got many instances. Prahlāda Mahārāja, he was a little boy, five years old, and his only difficulty was that he became a devotee of the Lord. His father became enemy, atheistic father, Hiraṇyakaśipu. He tortured him like anything, but he was not to be moved. He was stuck, sticking to his own position. This is . . .

And you have got many instance in your, this part of your . . . Lord Jesus Christ, he was crucified, but still, he remained steady in his position. Haridāsa Ṭhākura, he was Muhammadan. When he took up this Kṛṣṇa consciousness, the Muhammadan government chastised him like anything. He remained steady.

So these religious persecution, this and that, that is the history of the whole world. But if one sticks to the position of becoming a pure devotee of the Lord, he has nothing to be afraid of. He will be steady, and he will prosecute his business steadily. Kṛṣṇa will help him. There is no doubt about it.

(break) You shall begin here:

Devotee: The four rules? No gambling, no meat-eating, no sex out of marriage . . .

(break) Then other offenses he will give you, ten kinds of offenses. There is a list. So you should take from him now. Bow down.

So your name is Śrī-Caitanya dāsa. I think there is no . . .

Prabhupāda: Come on. Now here. Give me this.

Thank you very much. Come on.

Prabhupāda: (Arundhatī's father repeats) ". . . was so long under my care. Now I give you a charge. You please take and accept her as your wife."

(Pradyumna repeats:) "Yes, I accept Arundhatī as my wife, and I take charge of her life in all conditions. I will never separate with her, and jointly we shall execute Kṛṣṇa consciousness."

Prabhupāda: You say, (Arundhatī repeats) "I accept you as my husband, Pradyumna, and I shall help you in the matter of Kṛṣṇa consciousness throughout my life. I shall never separate from you in all condition, in happiness or distress."

Now you change the garland. Hare Kṛṣṇa. Jaya. Now you . . . you put this cloth upon . . . now cover this head. Yes. And give that red vermilion, red.

Put silently on this. Now chant,