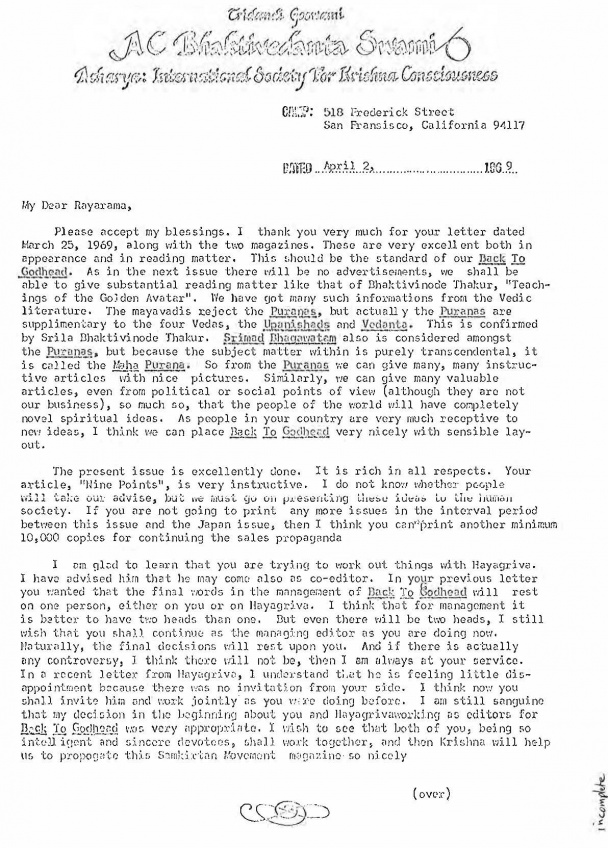 Please accept my blessings. I thank you very much for your letter dated March 25, 1969, along with the two magazines. These are very excellent both in appearance and in reading matter. This should be the standard of our Back To Godhead. As in the next issue there will be no advertisements, we shall be able to give substantial reading matter like that of Bhaktivinode Thakur, "Teachings of the Golden Avatar." We have got many such informations from the Vedic literature. The mayavadis reject the Puranas, but actually the Puranas are supplementary to the four Vedas, the Upanisads and Vedanta. This is confirmed by Srila Bhaktivinode Thakur. Srimad Bhagavatam also is considered amongst the Puranas , but because the subject matter within is purely transcendental, it is called the Maha Purana. So from the Puranas we can give many, many instructive articles with nice pictures. Similarly, we can give many valuable articles, even from political or social points of view (although they are not our business), so much so, that the people of the world will have completely novel spiritual ideas. As people in your country are very much receptive to new ideas, I think we can place Back To Godhead very nicely with sensible layout.

The present issue is excellently done. It is rich in all respects. Your article, "Nine Points," is very instructive. I do not know whether people will take our advice, but we must go on presenting these ideas to the human society. If you are not going to print any more issues in the interval period between this issue and the Japan issue, then I think you can reprint another minimum 10,000 copies for continuing the sales propaganda.

I am glad to learn that you are trying to work out things with Hayagriva. I have advised him that he may come also as co-editor. In your previous letter you wanted that the final words in the management of Back To Godhead will rest on one person, either on you or on Hayagriva. I think that for management it is better to have two heads than one. But even there will be two heads, I still wish that you shall continue as the managing editor as you are doing now. Naturally, the final decisions will rest upon you. And if there is actually any controversy, I think there will not be, then I am always at your service. In a recent letter from Hayagriva, I understand that he is feeling little disappointment because there was no invitation from your side. I think now you shall invite him and work jointly as you were doing before. I am still sanguine that my decision in the beginning about you and Hayagriva working as editors for Back To Godhead was very appropriate. I wish to see that both of you, being so intelligent and sincere devotees, shall work together, and then Krishna will help us to propagate this Sankirtan Movement magazine so nicely.

I am going to Los Angeles on the sixth morning, and I am thinking of starting for New York on the ninth morning. The tickets may be sent directly to the Los Angeles temple address.

Enclosed find one nice article published in Hawaii while I was coming here. I think you can utilize it for your BTG.