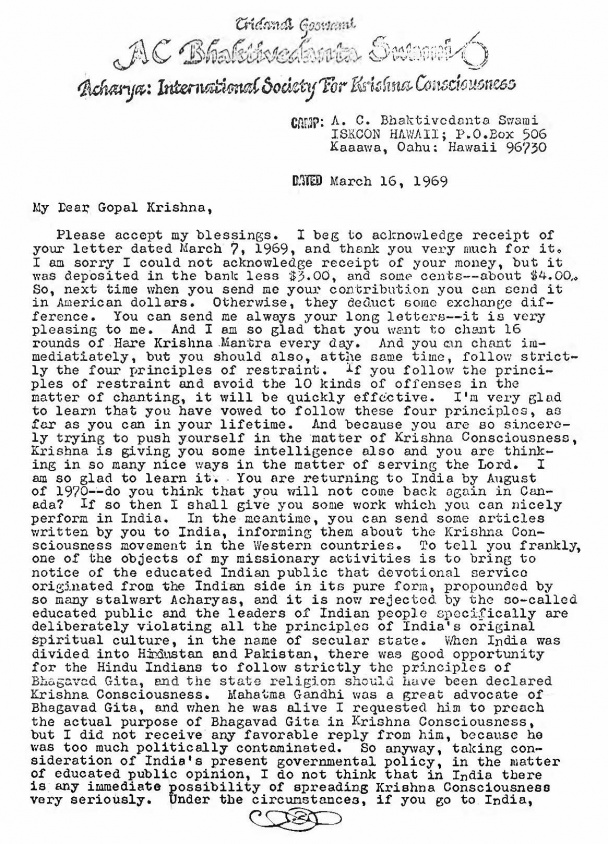 Letter to Gopal Krishna (Page 1 of 2) 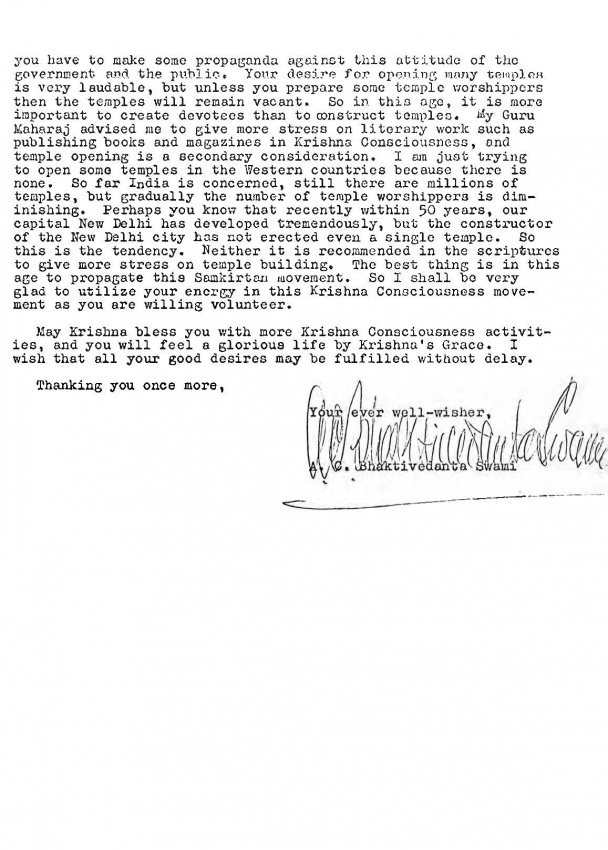 Letter to Gopal Krishna (Page 2 of 2)

Please accept my blessings. I beg to acknowledge receipt of your letter dated March 7, 1969, and thank you very much for it. I am sorry I could not acknowledge receipt of your money, but it was deposited in the bank less $3.00, and some cents—about $4.00. So, next time when you send me your contribution you can send it in American dollars. Otherwise, they deduct some exchange difference. You can send me always your long letters—it is very pleasing to me. And I am so glad that you want to chant 16 rounds of Hare Krishna Mantra every day. And you can chant immediately, but you should also, at the same time, follow strictly the four principles of restraint and avoid the 10 kinds of offenses in the matter of chanting, it will be quickly effective. I'm very glad to learn that you have vowed to follow these four principles, as far as you can in your lifetime. And because you are so sincerely trying to push yourself in the matter of Krishna Consciousness, Krishna is giving you some intelligence also and you are thinking in so many nice ways in the matter of serving the Lord. I am so glad to learn it. You are returning to India by August of 1970—do you think that you will not come back again in Canada? If so then I shall give you some work which you can nicely perform in India, informing them about the Krishna Consciousness movement in the Western countries. To tell you frankly, one of the objects of my missionary activities is to bring to notice of the educated Indian public that devotional service originated from the Indian side in its pure form, propounded by educated public and the leaders of Indian people specifically are deliberately violating all the principles of India's original spiritual culture, in the name of secular state. When India was divided into Hindustan and Pakistan, there was good opportunity for the Hindu Indians to follow strictly the principles of Bhagavad Gita, and the state religion should have been declared Krishna Consciousness. Mahatma Gandhi was a great advocate of Bhagavad Gita, and when he was alive I requested him to preach but I did not receive any favorable reply from him, because he was too much politically contaminated. So anyway, taking consideration of India's present governmental policy, in the matter of educated public opinion, I do not think that in India there is any immediate possibility of spreading Krishna Consciousness very seriously. Under the circumstances, if you go to India, you have to make some propaganda against this attitude of the government and the public. Your desire for opening many temples is very laudable, but unless you prepare some temple worshippers then the temples will remain vacant. So in this age, it is more important to create devotees than to construct temples. My Guru Maharaj advised me to give more stress on literary work such as publishing books and magazines in Krishna Consciousness, and temple opening is a secondary consideration. I am just trying to open some temples in the Western countries because there is none. So far India is concerned, still there are millions of temples, but gradually the number of temple worshippers is diminishing. Perhaps you know that recently within 50 years, our capital New Delhi has developed tremendously, but the constructor of the New Delhi city has not erected even a single temple. So this is the tendency. Neither it is recommended in the scriptures to give more stress on temple building. The best thing is in this age to propagate this Sankirtana movement. So I shall be very glad to utilize your energy in this Krishna Consciousness movement as you are willing volunteer.

May Krishna bless you with more Krishna Consciousness activities, and you will feel a glorious life by Krishna's Grace. I wish that all your good desires may be fulfilled without delay.

Thanking you once more,