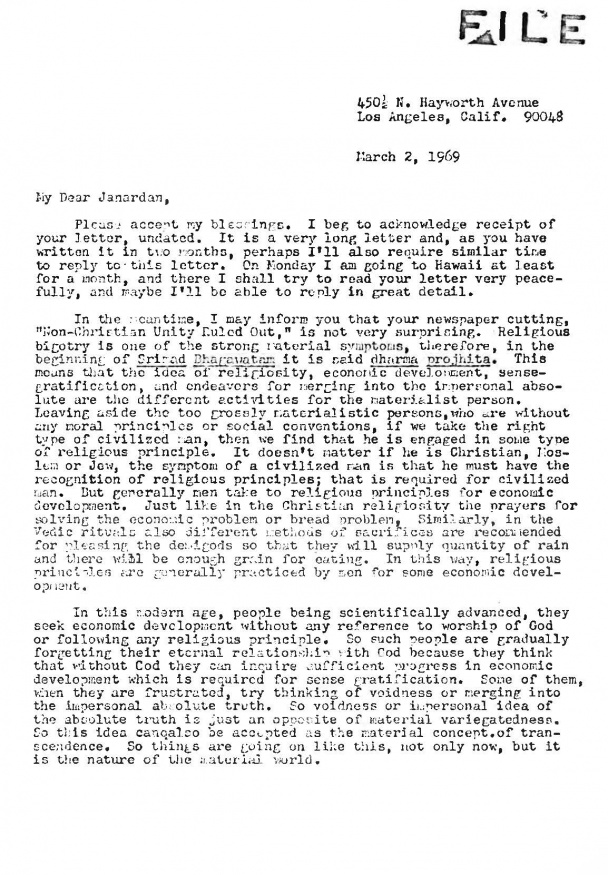 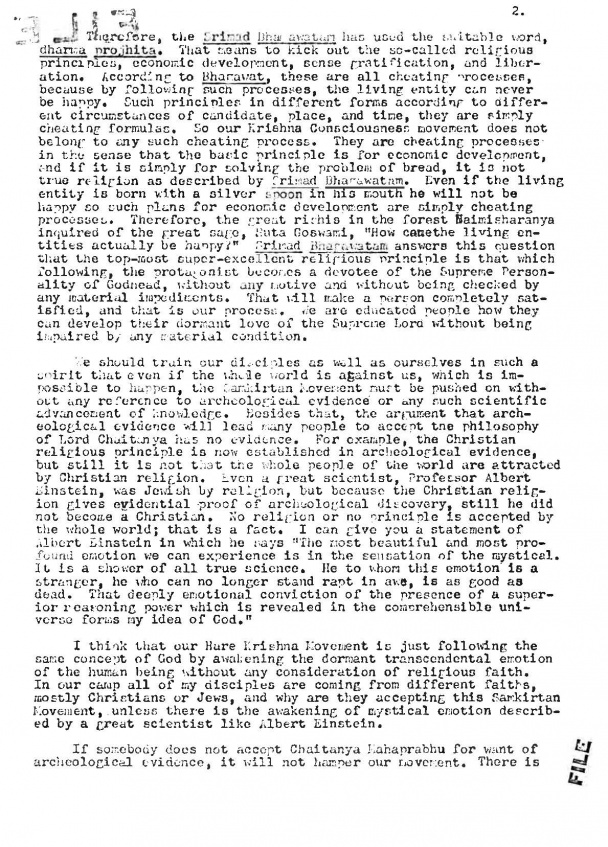 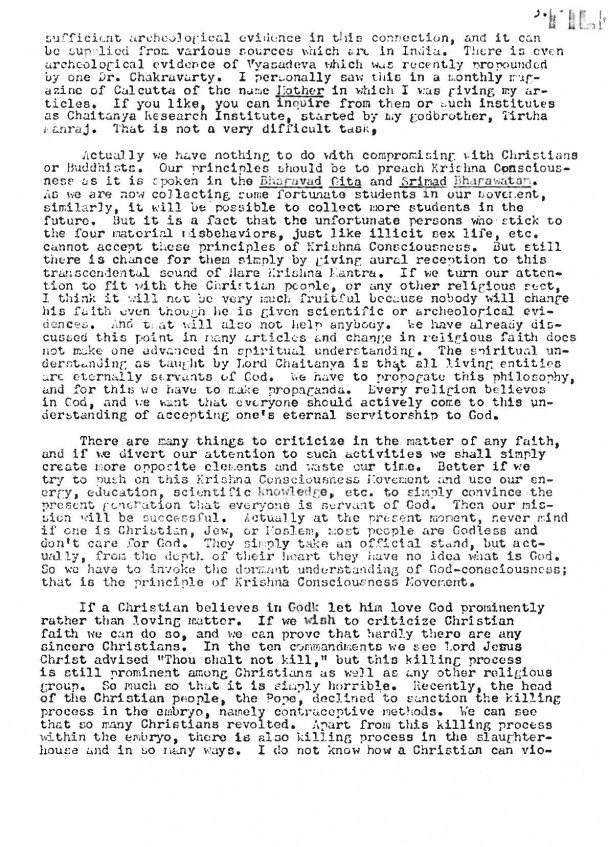 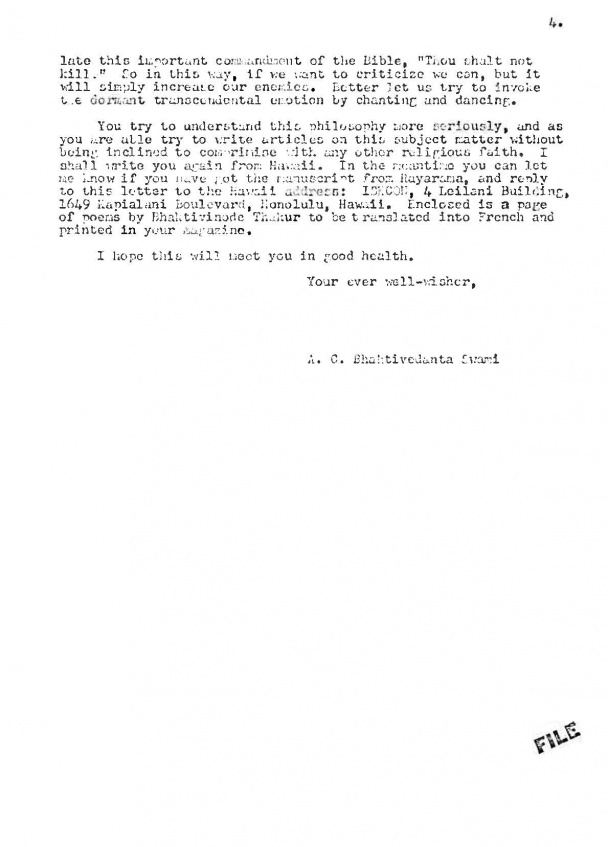 Please accept my blessings. I beg to acknowledge receipt of your letter, undated. It is a very long letter and, as you have written it in two months, perhaps I'll also require similar time to reply to this letter. On Monday I am going to Hawaii at least for a month, and there I shall try to read your letter very peacefully, and maybe I'll be able to reply in great detail.

In the meantime, I may inform you that your newspaper cutting, "Non-Christian Unity Ruled Out," is not very surprising. Religious bigotry is one of the strong material symptoms, therefore, in the beginning of Srimad Bhagavatam it is said dharma projhita. This means that the idea of religiosity, economic development, sense-gratification, and endeavors for merging into the impersonal absolute are the different activities for the materialist person. Leaving aside the too grossly materialistic persons, who are without any moral principles or social conventions, if we take the right type of civilized man, then we find that he is engaged in some type of religious principle. It doesn't matter if he is Christian, Moslem or Jew, the symptom of a civilized man is that he must have the recognition of religious principles; that is required for civilized man. But generally men take to religious principles for economic development. Just like in the Christian religiosity the prayers for solving the economic problem or bread problem. Similarly, in the Vedic rituals also different methods of sacrifices are recommended for pleasing the demigods so that they will supply quantity of rain and there will be enough grain for eating. In this way, religious principles are generally practiced by men for some economic development.

In this modern age, people being scientifically advanced, they seek economic development without any reference to worship of God or following any religious principle. So such people are gradually forgetting their eternal relationship with God because they think that without God they can inquire sufficient progress in economic development which is required for sense gratification. Some of them, when they are frustrated, try thinking of voidness or merging into the impersonal absolute truth. So voidness or impersonal idea of the absolute truth is just an opposite of material variegatedness. So this idea can also be accepted as the material concept of transcendence. So things are going on like this, not only now, but it is the nature of the material world.

Therefore, the Srimad Bhagavatam has used the suitable word, dharma projhita . That means to kick out the so-called religious principles, economic development, sense gratification, and liberation. According to Bhagavata , these are all cheating processes, because by following such processes, the living entity can never be happy. Such principles in different forms according to different circumstances of candidate, place, and time, they are simply cheating formulas. So our Krishna Consciousness movement does not belong to any such cheating process. They are cheating processes in the sense that the basic principle is for economic development, and if it is simply for solving the problem of bread, it is not true religion as described by Srimad Bhagavatam. Even if the living entity is born with a silver spoon in his mouth he will not be happy so such plans for economic development are simply cheating processes. Therefore, the great rishis in the forest Naimisharanya inquired of the great sage, Suta Goswami, "How can the living entities actually be happy?" Srimad Bhagavatam answers this question that the top-most super-excellent religious principle is that which following, the protagonist becomes a devotee of the Supreme Personality of Godhead, without any motive and without being checked by any material impediments. That will make a person completely satisfied, and that is our process. We are educated people how they can develop their dormant love of the Supreme Lord without being impaired by any material condition.

We should train our disciples as well as ourselves in such a spirit that even if the whole world is against us, which is impossible to happen, the Sankirtan Movement must be pushed on without any reference to archeological evidence or any such scientific advancement of knowledge. Besides that, the argument that archeological evidence will lead many people to accept the philosophy of Lord Caitanya has no evidence. For example, the Christian religion principle is now established in archeological evidence, but still it is not that the whole people of the world are attracted by Christian religion. Even a great scientist, Professor Albert Einstein, was Jewish by religion, but because the Christian religion gives evidential proof of archeological discovery, still he did not become a Christian. No religion or no principle is accepted by the whole world; that is a fact. I can give you a statement of Albert Einstein in which he says "The most beautiful and most profound emotion we can experience is in the sensation of the mystical. It is a shower of all true science. He to whom this emotion is a stranger, he who can no longer stand rapt in awe, is as good as dead. That deeply emotional conviction of the presence of a superior reasoning power which is revealed in the comprehensible universe forms my idea of God."

I think that our Hare Krishna Movement is just following the same concept of God by awakening the dormant transcendental emotion of the human being without any consideration of religious faith. In our camp all of my disciples are coming from different faiths, mostly Christians or Jews, and why are they accepting this Sankirtan Movement, unless there is the awakening of mystical emotion described by a great scientist like Albert Einstein.

If somebody does not accept Chaitanya Mahaprabhu for want of archeological evidence, it will not hamper our movement. There is sufficient archeological evidence in this connection, and it can be supplied from various sources which are in India. There is even archeological evidence of Vyasadeva which was recently propounded by one Dr. Cahkravarty. I personally saw this in a monthly magazine of Calcutta of the name Mother in which I was giving my articles. If you like, you can inquire from them or such institutes as Chaitanya Research Institute, started by my godbrother, Tirtha Maharaj. That is not a very difficult task.

Actually we have nothing to do with compromising with Christians or Buddhists. Our principles should be to preach Krishna Consciousness as it is spoken in the Bhagavad Gita and Srimad Bhagavatam. As we are now collecting some fortunate students in our movement, similarly, it will be possible to collect more students in the future. But it is a fact that the unfortunate persons who stick to the four material misbehaviors, just like illicit sex life, etc. cannot accept these principles of Krishna Consciousness. But still there is chance for them simply by giving aural reception to this transcendental sound of Hare Krishna Mantra. If we turn our attention to fit with the Christian people, or any other religious sect, I think it will not be very much fruitful because nobody will change his faith even though he is given scientific or archeological evidences. And that will also not help anybody. We have already discussed this point in many articles and change in religious faith does not make one advanced in spiritual understanding. The spiritual understanding as taught by Lord Chaitanya is that all living entities are eternally servants of God. We have to propagate this philosophy, and for this we have to make propaganda. Every religion believes in God, and we want that everyone should actively come to this understanding of accepting one's eternal servitorship to God.

There are many things to criticize in the matter of any faith, and if we divert our attention to such activities we shall simply create more opposite elements and waste our time. Better if we try to push on this Krishna Consciousness Movement and use our energy, education, scientific knowledge, etc. to simply convince the present generation that everyone is servant of God. Then our mission will be successful. Actually at the present moment, never mind if one is Christian, Jew, or Moslem, most people are Godless and don't care for God. They simply take an official stand, but actually, from the depth of their heart they have no idea what is God. So we have to invoke the dormant understanding of God-consciousness; that is the principle of Krishna Consciousness Movement.

If a Christian believes in God let him love God prominently rather than loving matter. If we wish to criticize Christian faith we can do so, and we can prove that hardly there are any sincere Christians. In the ten commandments we see Lord Jesus Christ advised "Thou shalt not kill," but this killing process is still prominent among Christians as well as any other religious group. So much so that it is simply horrible. Recently, the head of the Christian people, the Pope, declined to sanction the killing process in the embryo, namely contraceptive methods. We can see that so many Christians revolted. Apart from this killing process within the embryo, there is also killing process in the slaughterhouse and in so many ways. I do not know how a Christian can violate this important commandment of the Bible, "Thou shalt not kill." So in this way, if we want to criticize we can, but it will simply increase our enemies. Better let us try to invoke the dormant transcendental emotion by chanting and dancing.

You try to understand this philosophy more seriously, and as you are able try to write articles on this subject matter without being inclined to compromise with any other religious faith. I shall write you again from Hawaii. In the meantime you can let me know if you have got the manuscript from Rayarama, and reply to this letter to the Hawaii address: ISKCON, 4 Leilani Building, 1649 Kapialani Boulevard, Honolulu, Hawaii. Enclosed is a page of poems by Bhaktivinode Thakur to be translated into French and printed in your magazine. I hope this will meet you in good health.