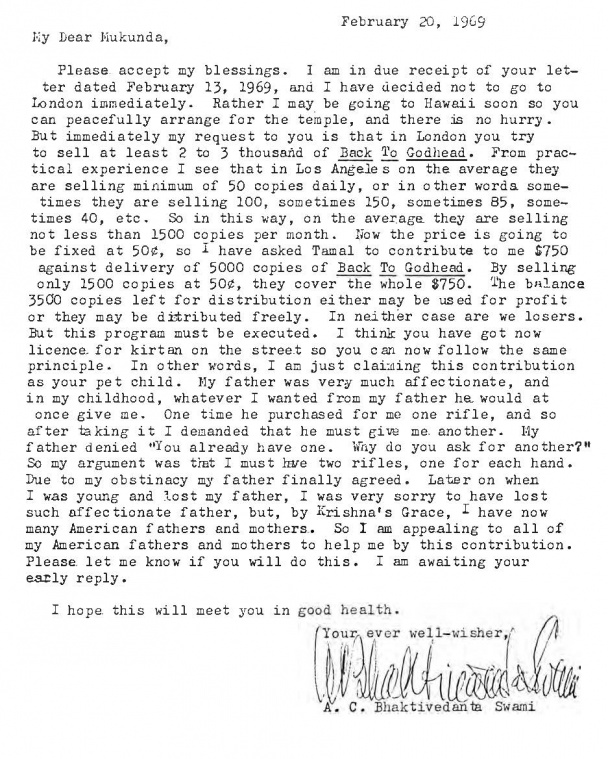 Please accept my blessings. I am in due receipt of your letter dated February 13, 1969, and I have decided not to go to London immediately. Rather I may be going to Hawaii soon as you can peacefully arrange for the temple, and there is no hurry. But immediately my request to you is that in London you try to sell at least 2 to 3 thousand Back To Godhead. From practical experience I see that in Los Angeles on the average they are selling minimum of 50 copies daily, or in other words sometimes they are selling 100, sometimes 150, sometimes 85, sometimes 40, etc. So in this way, on the average they are selling not less than 1500 copies per month. Now the price is going to be fixed at 50 cents, so I have asked Tamal to contribute to me $750 against delivery of 5000 copies of Back To Godhead. By selling only 1500 copies at 50 cents, they cover the whole $750. The balance 3500 copies left for distribution either may be used for profit or they may be distributed freely. In neither case are we losers. But this program must be executed. I think you have got now license for kirtan on the street so you can now follow the same principle. In other words, I am just claiming this contribution as your pet child. My father was very much affectionate, and in my childhood, whatever I wanted from my father he would at once give me. One time he purchased for me one rifle, and so after taking it I demanded that he must give me another. My father denied "You already have one. Why do you ask me for another?" So my argument was that I must have two rifles, one for each hand. Due to my obstinacy my father finally agreed. Later on when I was young and lost my father, I was very sorry to have lost such affectionate father, but by Krishna's Grace, I have now many American fathers and mothers. So I am appealing to all of my American fathers and mothers to help me by this contribution. Please let me know if you will do this. I am waiting your early reply.