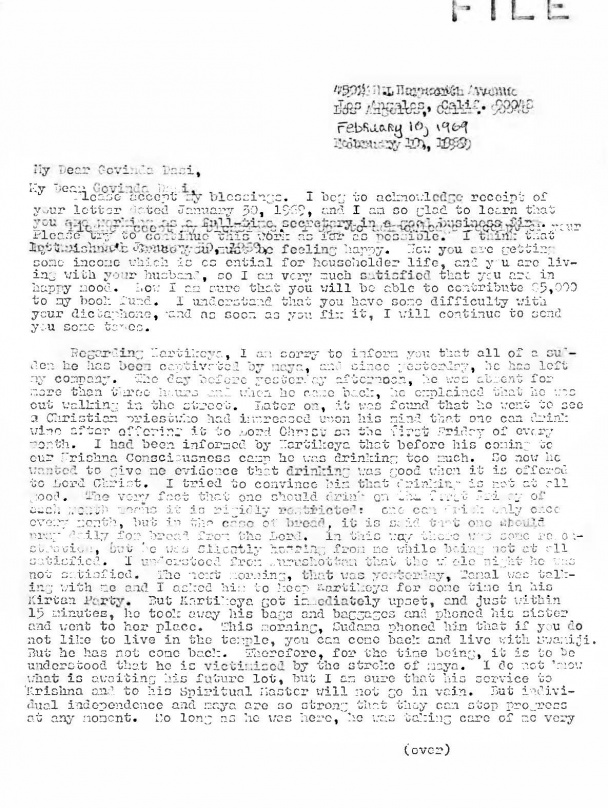 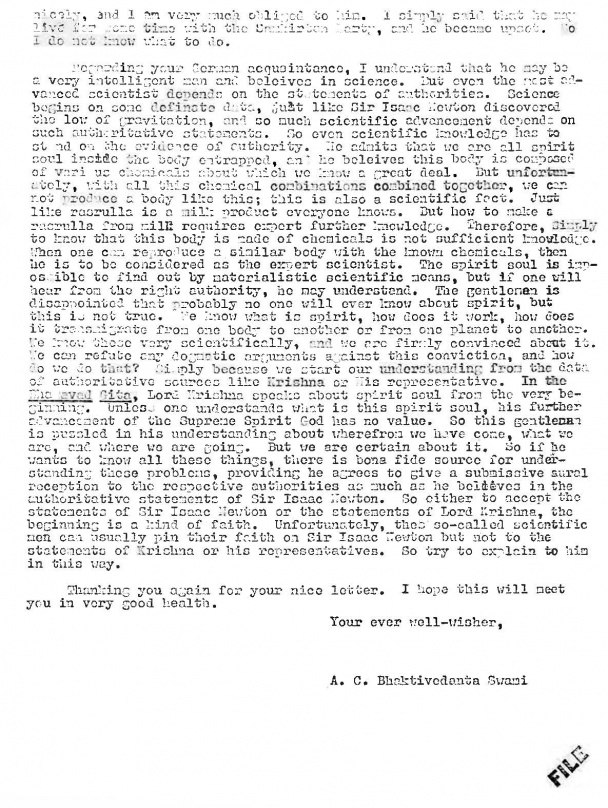 Please accept my blessings. I beg to acknowledge receipt of your letter dated January 30, 1969, and I am so glad to learn that you are working as a full-time secretary in a good business firm. Please try to continue this work as far as possible. I think that by Krishna's mercy you must be feeling happy. Now you are getting some income which is essential for householder life, and you are living with your husband, so I am very much satisfied that you are in happy mood. Now I am sure that you will be able to contribute $5,000 to my book fund. I understand that you have some difficulty with your dictaphone, and as soon as you fix it, I will continue to send you some tapes.

Regarding Kartikeya, I am sorry to inform you that all of a sudden he has been captivated by maya, and since yesterday, he has left my company. The day before yesterday afternoon, he was absent for more than three hours and when he came back, he explained that he was out walking in the street. Later on, it was found that he went to see a Christian priest who had impressed upon his mind that one can drink wine after offering it to Lord Christ on the first Friday of every month. I had been informed by Kartikeya that before his coming to our Krishna Consciousness camp he was drinking too much. So now he wanted to give me evidence that drinking was good when it is offered to Lord Christ. I tried to convince him that drinking is not at all good. The very fact that one should drink on the first Friday of each month means it is rigidly restricted; one can drink only once every month, but in the case of bread, it is said that one should pray daily for bread from the Lord. In this way there was some remonstration, but he was silently hearing from me while being not at all satisfied. I understood from Purusottam that the whole night he was not satisfied. The next morning, that was yesterday, Tamal was talking with me and I asked him to keep Kartikeya for some time in his Kirtan Party. But Kartikeya got immediately upset, and just within 15 minutes, he took away his bags and baggage and phoned his sister and went to her place. This morning, Sudama phoned him that if you do not like to live in the temple, you can come back and live with Swamiji. But he has not come back. Therefore, for the time being, it is to be understood that he is victimized by the stroke of maya. I do not know what is awaiting his future lot, but I am sure that his service to Krishna and to his Spiritual Master will not go in vain. But individual independence and maya are so strong that they can stop progress at any moment. So long as he was here, he was taking care of me very nicely, and I am very much obliged to him. I simply said that he may live for some time with the Sankirtan Party, and he became upset. So I do not know what to do.

Regarding your German acquaintance, I understand that he may be a very intelligent man and believes in science. But even the most advanced scientist depends on the statements of authorities. Science begins on some definite data, just like Sir Isaac Newton discovered the law of gravitation, and so much scientific advancement depends on such authoritative statements. So even scientific knowledge has to stand on the evidence of authority. He admits that we are all spirit soul inside the body entrapped, and he believes this body is composed of various chemicals about which we know a great deal. But unfortunately, with all this chemical combinations combined together, we can not produce a body like this; this is also a scientific fact. Just like rasgulla is a milk product everyone knows. But how to make a rasgulla from milk requires expert further knowledge. Therefore, simply to know that this body is made of chemicals is not sufficient knowledge. When one can reproduce a similar body with the known chemicals, then he is to be considered as the expert scientist. The spirit soul is impossible to find out by materialistic scientific means, but if one will hear from the right authority, he may understand. The gentleman is disappointed that probably no one will ever know about spirit, but this is not true. We know what is spirit, how does it work, how does it transmigrate from one body to another or from one planet to another. We know these very scientifically, and we are firmly convinced about it. We can refute any dogmatic arguments against this conviction, and how do we do that? Simply because we start our understanding from the data of authoritative sources like Krishna or His representative. In the Bhagavad-gita, Lord Krishna speaks about spirit soul from the very beginning. Unless one understands what is this spirit soul, his further advancement of the Supreme Spirit God has no value. So this gentleman is puzzled in his understanding about wherefrom we have come, what we are, and where we are going. But we are certain about it. So if he wants to know all these things, there is bonafide source for understanding these problems, providing he agrees to give a submissive aural reception to the respective authorities as much as he believes in the authoritative statements of Sir Isaac Newton. So either to accept the statements of Sir Isaac Newton or the statements of Lord Krishna, the beginning is a kind of faith. Unfortunately, these so-called scientific men can usually pin their faith on Sir Isaac Newton but not to the statements of Krishna or his representatives. So try to explain to him in this way.

Thanking you again for your nice letter. I hope this will meet you in very good health.