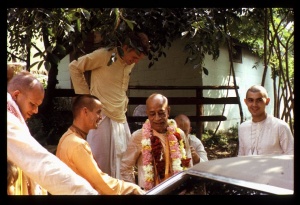 In the Kali-santarana, Upaniṣad also, it is said that these 16 words can only deliver all conditioned soul from the clutches of māyā in this age of Kali. And it is also remarked therein that there is no better means of being liberated in this age. That is the version of all the Vedas. Similarly Madhvācārya has quoted from Muṇḍaka Upaniṣad in his commentary, that in the Dvāpara-yuga Lord Viṣṇu can be worshipped by the method of pañcarātra while in the age of Kali simply by chanting the holy name of the Lord He can be worshipped.

Śrīla Jīva Gosvāmī in his thesis Bhakti-sandarbha, section number 284, has elaborately discussed about the importance of Kṛṣṇa-mantra and holy name of Kṛṣṇa as follows; he says, within quotation that, "All the mantras are indication of the holy name of the Supreme Personality of Godhead. The specific significance of each and every mantra is that whenever there is some mantra the prefix is namaḥ, na, m a h. This namaḥ indicates that one surrenders unto the holy name of the Lord. Namaḥ means surrendering.

By the supreme will of the Lord, all the mantras chanted by great sages like Nārada and others has potentially a specific spiritual power. As such, as soon as such mantra is vibrated by the devotee, immediately the spiritual relationship of the conditioned soul with the Supreme Personality of Godhead is evoked. Because in each and every mantra, the specific potency of the Lord is invested therefore, simply by chanting a mantra, one can rise up to the highest perfectional stage of spiritual life.

Somebody may argue that if the holy name of the Lord, or the mahā-mantra, is so much powerful, then why there is necessity of formal initiation and other ritualistic function.

So in answer to this question, Śrīla Jīva Gosvāmī has concluded that although a person who is chanting without any offense the holy name of the Lord does not require to be initiated separately. But still because the conditioned soul is presently situated within this contaminated body. It is sometimes found that he is addicted to some undesirable bad habits. As such in order to purify from such bad habits, great ṛṣis like Nārada and other sages they have recommended in their books to chant gāyatrī-mantra and bīja-mantra.

There is necessity of mantra perfection in order to subdue the propensity of the conditioned soul for material enjoyment.

The word namaḥ, n, a, m, a, h, can be explained as follows: mah, means false ego and na means which nullifies. That means by practice of mantra one becomes able gradually to rise up transcendentally from his false egotism. False egotism means accepting this body as self and in relationship to the body to accept this material world as very important. This is false egotism. By perfection of chanting mantra one is able to rise up on the transcendental platform without any false identification with the material world.

He has addressed the holy name of the Lord, Hare Kṛṣṇa in that way.

Explanation that meditation is possible in the Satya-yuga but in this age of Kali it is not possible. Therefore the only procedure for getting salvation is to chant Hare Kṛṣṇa. Similarly in the Tretā-yuga the worship of the Lord is performed by executing different types of sacrifices as they are mentioned in the Vedic ritualistic portion. But in this age of Kali that is not possible. Therefore it is stressed that one should simply chant Hare Kṛṣṇa.

In Dvāpara-yuga temple worship is recommended but in this age of Kali actually people have lost all faith in going to the churches and temples. Therefore temple worship cannot be performed in this way very nicely. As such the only method is chanting Hare Kṛṣṇa. In this age of Kali therefore any method of salvation, like meditation worships and offering sacrifices are not very valid. Because they are unable to perform such activities very nicely. As such one should simply stick to the chanting of the holy name; Hare Kṛṣṇa, Hare Kṛṣṇa, Kṛṣṇa Kṛṣṇa, Hare Hare, Hare Rāma, Hare Rāma, Rāma Rāma, Hare Hare and that is the recommendation of Bṛhan-nāradīya Purāṇa, a Vedic literature and confirmed by Lord Caitanya Mahāprabhu and there is no doubt about it, that our liberation is guaranteed simply by chanting offencelessly the 16 names:

Then if the disciple receives the holy name according to the instruction given by the spiritual master and with faith and reverence, he places the Hare Kṛṣṇa mahā-mantra within his heart. And as instructed and guided by the spiritual master, he worships the holy name as good as the Supreme Personality of Godhead . . . then the beginning of worshipment to the Lord immediately starts.

Simply by chanting the holy name of the Lord, and because he is empowered now by the spiritual potency of the Lord, he can make disciples all over the world . . . such propaganda work . . . the whole world begins to chant Hare Kṛṣṇa because in the form of the holy name. Kṛṣṇa Himself controls the whole world in that way. People at that time, when begins to chant Hare Kṛṣṇa in such way there is different kinds of symptoms of perfection; namely sometimes laughing, sometimes crying, sometimes dancing, sometimes chanting, these symptoms are manifestations.

There are many fools who say that these 16 names Hare Kṛṣṇa cannot be loudly chanted but because they are mantra they should be softly vibrated. This way they commit offence by taking the devotee to chant Hare Kṛṣṇa loudly. But a person who has attained the stage of love of God by chanting Hare Kṛṣṇa, he without being checked in that way he chants this Hare Kṛṣṇa with devotees and all the people of the world just receives instruction about chanting the holy name of the Lord.

As soon as one chants the holy name of the Lord he simultaneously hears and remembers the glory of the holy name because the holy name is identical with the Supreme Lord. Therefore, simply by chanting the holy name, one develops his loving affection for rendering service to the Lord becomes manifested.

This willingness to serve the Lord after chanting the holy name is called bhāva or emotion. One who has attained this emotional stage he is already relieved from the ignorance of māyā and therefore in his activities nothing undesirable activity can be observed. Such spiritually situated person being enriched with other spiritual ingredients relishes the chanting of the holy name very nicely.

The most important necessity of life is to attain love of Kṛṣṇa. That is the highest perfectional stage of any living entity. The performance of religious ritualistic activities or be engaged in economic development for prosperous condition of material existence and the process of sense gratification and at last to aspire after liberation from the material world. All these things cannot be compared with the situation of a person who has developed love of Godhead. The love of Godhead is compared with such four kinds of activities, it appears to be most insignificant.

Sometimes it is found that persons who are actually very much materially addicted but in order to take the credit of devotional position artificially tries to cry and laugh and dance in order to show to the public that he has developed all these symptoms by higher stage of devotional service. But such artificial show cannot give to the shower any spiritual benefit. Rather, on the other hand, it brings fall down of such pseudo-devotee . . . a pure devotee should never artificially show any such thing, rather such movement of the senses should be avoided by a pure devotee.

One should wait however for the natural sequence of the spirit soul and the symptoms of laughing, crying, dancing, chanting when they are aroused from the spiritual platform—that should be welcomed. The symptoms are exhibited in the process of service mood, not otherwise. The person who is in the lowest status of material existence try to show all the spiritual symptoms artificially . . . he simply brings some undesirable effects to the understanding of the people in general.

Śrīla Jīva Gosvāmī has explained this fact in his Prīti Sandarbha thesis as follows, in quotations: "the person who has factually developed Kṛṣṇa consciousness and situated in perfect love of Kṛṣṇa, is never under the condition of material existence but he is situated under the pleasure potency of the Supreme Personality of Godhead.

Kṛṣṇa the Supreme Personality of Godhead is also voluntarily under the influence of that pleasure potency as such a pure devotee simply under the direct pleasure potency of the Supreme Lord is melted in different symptoms of crying, laughing, dancing and chanting. But that time the possibility of shivering in the body or standing of the hair on the holes are possible.

Sometimes it is found that even though there are manifestation of the symptoms but one is found that his material desires are not purified. At that . . . in that case it is to be understood that a devotee has not yet reached to the standard perfectional stage of devotional service. The purification of status means one has no more any desire in exchange of devotional service save and except love of God. Such stage of love of God is called causeless and without being hampered.

Such incapable persons are generally found packed up in a primitive place under the name of bhajana-kuṭira or place where one can chant Hare Kṛṣṇa without being disturbed by others or different kinds of maṭhas and temples. Such devotional service can protect one from the association of outsiders only. But those who are preachers by the order or the authority of the spiritual master even they do not follow such system being packed up in a limited place and travels all over the world.

In this connection the verses described in the 10th Canto of Śrīmad-Bhāgavatam that one should not imitate the activities of liberated persons rather one should be followers of pure devotees who have no attachment for material enjoyment but is able to dovetail everything in the service of Kṛṣṇa.