681007 - Letter to Hayagriva written from Seattle 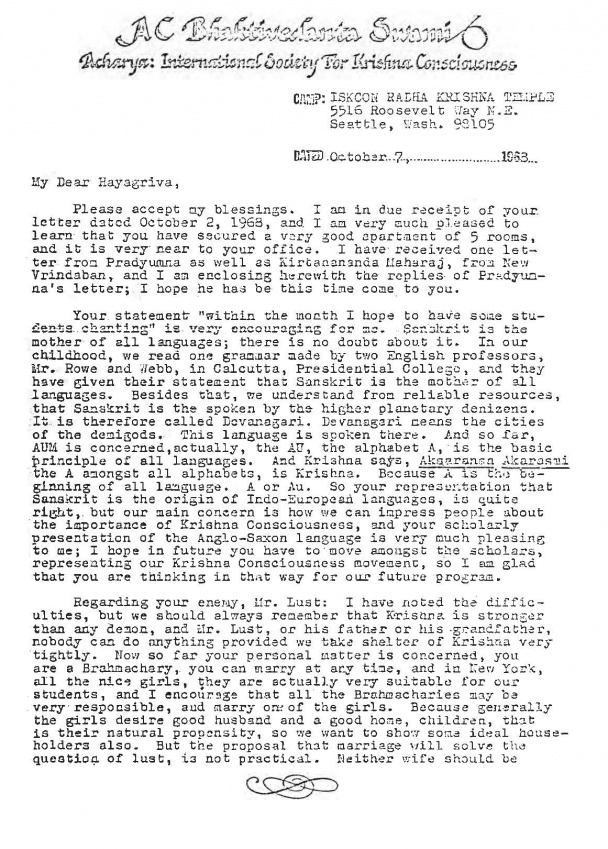 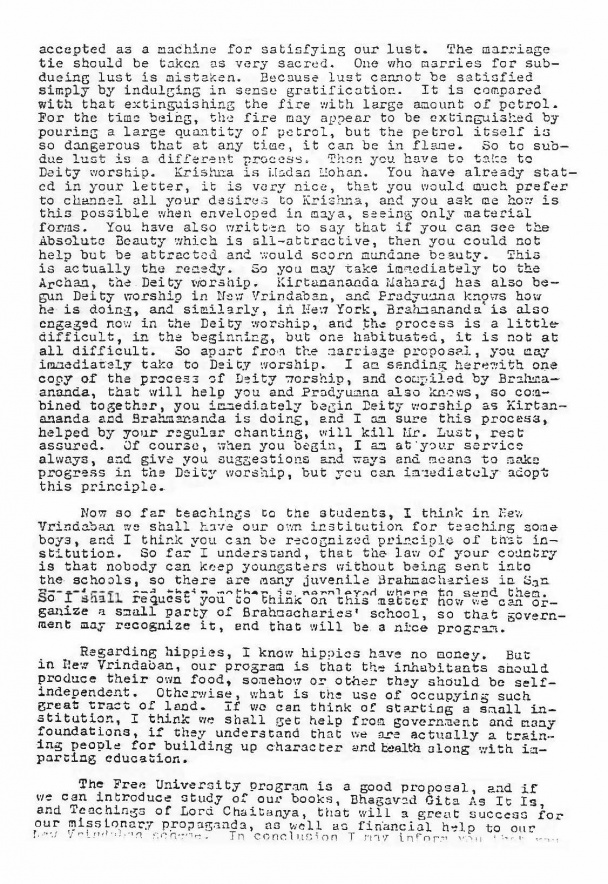 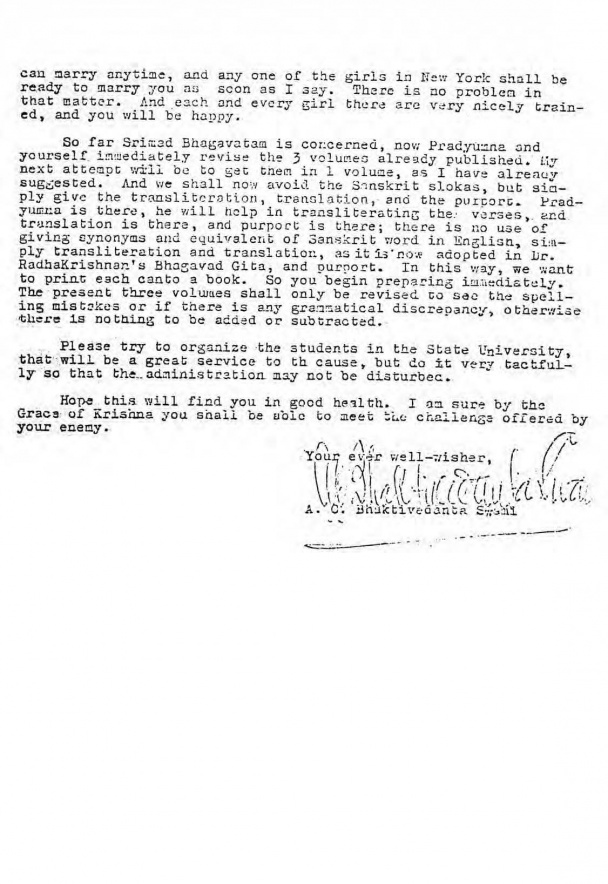 Please accept my blessings. I am in due receipt of your letter dated October 2, 1968, and I am very much pleased to learn that you have secured a very good apartment of 5 rooms, and it is very near to your office. I have received one letter from Pradyumna as well as Kirtanananda Maharaj, from New Vrindaban, and I am enclosing herewith the replies of Pradyumna's letter; I hope he has be this time come to you.

Your statement "within the month I hope to have some students chanting" is very encouraging for me. Sanskrit is the mother of all languages; there is no doubt about it. In our childhood, we read one grammar made by two English professors, Mr. Rowe and Webb, in Calcutta, Presidential College, and they have given their statement that Sanskrit is the mother of all languages. Besides that, we understand from reliable resources, that Sanskrit is the spoken by the higher planetary denizens. It is therefore called Devanagari. Devanagari means the cities of the demigods. This language is spoken there. And so far, AUM is concerned, actually, the AU, the alphabet A, is the basic principle of all languages. And Krishna says, Aksaranan Akarasmi the A amongst all alphabets, is Krishna. Because A is the beginning of all language. A or Au. So your representation that Sanskrit is the origin of Indo-European languages, is quite right, but our main concern is how we can impress people about the importance of Krishna Consciousness, and your scholarly presentation of the Anglo-Saxon language is very much pleasing to me; I hope in future you have to move amongst the scholars, representing our Krishna Consciousness movement, so I am glad that you are thinking in that way for our future program.

Regarding your enemy, Mr. Lust: I have noted the difficulties, but we should always remember that Krishna is stronger than any demon, and Mr. Lust, or his father or his grandfather, nobody can do anything provided we take shelter of Krishna very tightly. Now so far your personal matter is concerned, you are a Brahmachary, you can marry at any time, and in New York, all the nice girls, they are actually very suitable for our students, and I encourage that all the Brahmacharies may be very responsible, and marry one of the girls. Because generally the girls desire good husband and a good home, children, that is their natural propensity, so we want to show some ideal householders also. But the proposal that marriage will solve the question of lust, is not practical. Neither wife should be accepted as a machine for satisfying our lust. The marriage tie should be taken as very sacred. One who marries for subduing lust is mistaken. Because lust cannot be satisfied simply by indulging in sense gratification. It is compared with that extinguishing the fire with large amount of petrol. For the time being, the fire may appear to be extinguished by pouring a large quantity of petrol, but the petrol itself is so dangerous that at any time, it can be in flame. So to subdue lust is a different process. Then you have to take to Deity worship. Krishna is Madan Mohan. You have already stated in your letter, it is very nice, that you would much prefer to channel all your desires to Krishna, and you ask me how is this possible when enveloped in maya, seeing only material forms. You have also written to say that if you can see the Absolute Beauty which is all-attractive, then you could not help but be attracted and would scorn mundane beauty. This is actually the remedy. So you may take immediately to the Archan, the Deity worship. Kirtanananda Maharaj has also begun Deity worship in New Vrindaban, and Pradyumna knows how he is doing, and similarly, in New York, Brahmananda is also engaged now in the Deity worship, and the process is a little difficult, in the beginning, but one habituated, it is not at all difficult. So apart from the marriage proposal, you may immediately take to Deity worship. I am sending herewith one copy of the process of Deity worship, and compiled by Brahmananda, that will help you and Pradyumna also knows, so combined together, you immediately begin Deity worship as Kirtanananda and Brahmananda is doing, and I am sure this process, helped by your regular chanting, will kill Mr. Lust, rest assured. Of course, when you begin, I am at your service always, and give you suggestions and ways and means to make progress in the Deity worship, but you can immediately adopt this principle.

Now so far teachings to the students, I think in New Vrindaban we shall have our own institution for teaching some boys, and I think you can be recognized principle of that institution. So far I understand, that the law of your country is that nobody can keep youngsters without being sent into the schools, so there are many juvenile Brahmacharies in San Francisco and their mother is perplexed where to send them. So I shall request you to think on this matter how we can organize a small party of Brahmacaries' school, so that government may recognize it, and that will be a nice program.

Regarding hippies, I know hippies have no money. But in New Vrindaban, our program is that the inhabitants should produce their own food, somehow or other they should be self-independent. Otherwise, what is the use of occupying such great tract of land. If we can think of starting a small institution, I think we shall get help from government and many foundations, if they understand that we are actually a training people for building up character and health along with imparting education.

The Free University program is a good proposal, and if we can introduce study of our books, Bhagavad Gita As It Is, and Teachings of Lord Chaitanya, that will be a great success for our missionary propaganda, as well as financial help to our New Vrindaban scheme. In conclusion I may inform you that you can marry anytime, and any one of the girls in New York shall be ready to marry you as soon as I say. There is no problem in that matter. And each and every girl there are very nicely trained, and you will be happy.

So far Srimad Bhagavatam is concerned, now Pradyumna and yourself immediately revise the 3 volumes already published. My next attempt will be to get them in 1 volume, as I have already suggested. And we shall now avoid the Sanskrit slokas, but simply give the transliteration, translation, and the purport. Pradyumna is there he will help in transliterating the verses, and translation is there, and purport is there; there is no use of giving synonyms and equivalent of Sanskrit word in English, simply transliteration and translation, as it is now adopted in Dr. RadhaKrishnan's Bhagavad Gita, and purport. In this way, we want to print each canto a book. So you begin preparing immediately. The present three volumes shall only be revised to see the spelling mistakes or if there is any grammatical discrepancy, otherwise there is nothing to be added or subtracted.

Please try to organize the students in the State University, that will be a great service to the cause, but do it very tactfully so that the administration may not be disturbed.

Hope this will find you in good health. I am sure by the Grace of Krishna you shall be able to meet the challenge offered by your enemy.