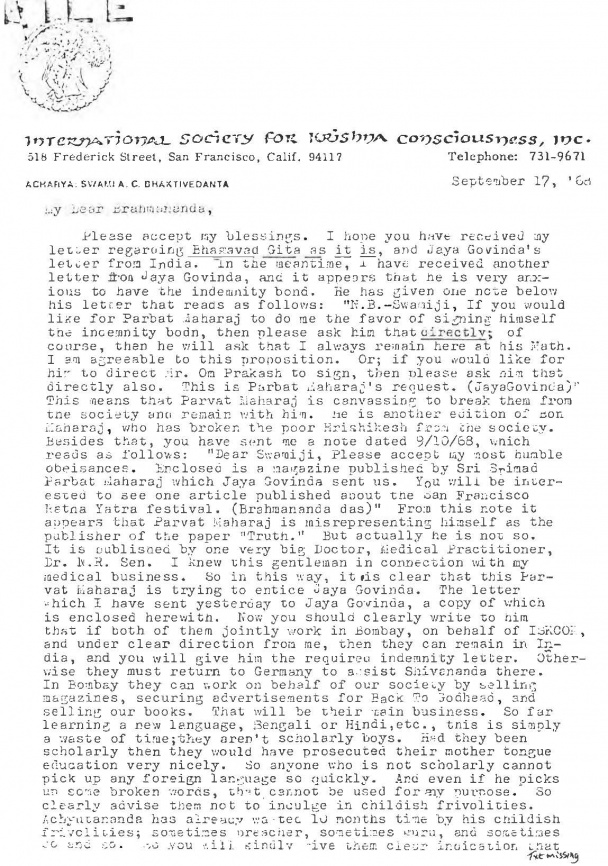 Please accept my blessings. I hope you have received my letter regarding Bhagavad Gita as it is, and Jaya Govinda's letter from India. In the meantime, I have received another letter from Jaya Govinda, and it appears that he is very anxious to have the indemnity bond. He has given one note below his letter that reads as follows: "N.B. Swamiji, If you would like for Parbat Maharaj to do me the favor of signing himself the indemnity bond, then please ask him that directly; of course, then he will ask that I always remain here at his Math. I am agreeable to this proposition. Or; if you would like for him to direct Mr. Om Prakash to sign, then please ask him that directly also. This is Parbat Maharaj's request. (Jaya Govinda)" This means that Parvat Maharaj is canvassing to break them from the society and remain with him. He is another edition of Bon Maharaj, who has broken the poor Hrshikesh from the society. Besides that, you have sent me a note dated 9/10/68, which reads as follows: "Dear Swamiji, Please accept my most humble obeisances. Enclosed is a magazine published by Sri Srimad Parbat Maharaj which Jaya Govinda sent us. You will be interested to see one article published about the San Francisco Ratha Yatra festival. (Brahmananda das)" From this note it appears that Parvat Maharaj is misrepresenting himself as the publisher of the paper "Truth." But actually he is not so. It is published by one very big Doctor, Medical Practitioner, Dr. N.R. Sen. I knew this gentleman in connection with my medical business. So in this way, it is clear that this Parvat Maharaj is trying to entice Jaya Govinda. The letter which I have sent yesterday to Jaya Govinda, a copy of which is enclosed herewith. Now you should clearly write to him that if both of them jointly work in Bombay, on behalf of ISKCON, and under clear direction from me, then they can remain in India, and you will give him the required indemnity letter. Otherwise they must return to Germany to assist Shivananda there. In Bombay, they can work on behalf of our society by selling magazines, securing advertisements for Back To Godhead, and selling our books. That will be their main business. So far learning a new language, Bengali or Hindi, etc., this is simply a waste of time; they aren't scholarly boys. Had they been scholarly then they would have prosecuted their mother tongue education very nicely. So anyone who is not scholarly cannot pick up any foreign language so quickly. And even if he picks up some broken words, that cannot be used for any purpose. So clearly advise them not to indulge in childish frivolities. Achyutananda has already wasted 10 months time by his childish frivolities; sometimes preacher, sometimes guru, and sometimes so and so. So you will kindly give them clear indication that [text missing] they should stop all these things, and work as directed in the above way—without further delay. I think Bombay is the right field for their activities as I have already suggested in the enclosed copy of the letter, which please find.

Hope you are all well,