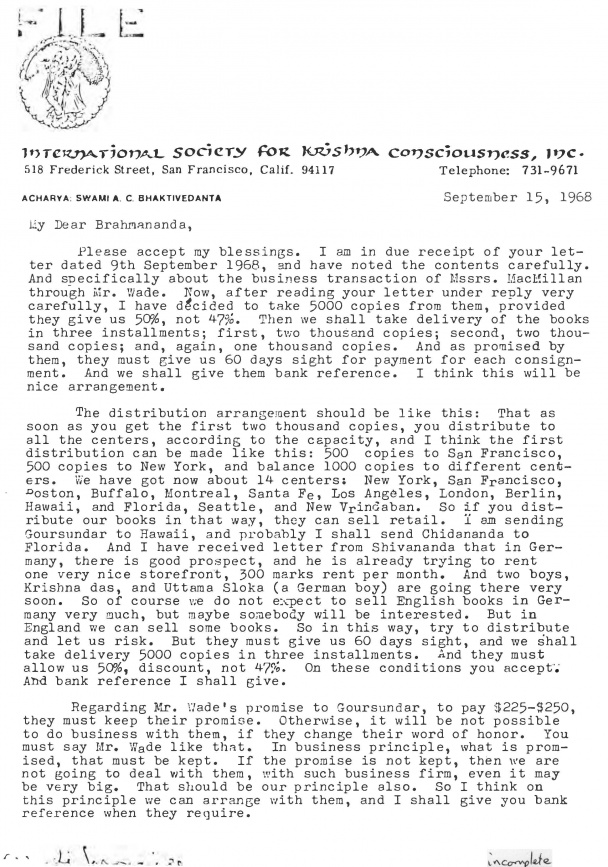 Please accept my blessings. I am in due receipt of your letter dated 9th September 1968, and have noted the contents carefully. And specifically about the business transaction of Messrs. MacMillan through Mr. Wade. Now, after reading your letter under reply very carefully, I have decided to take 5000 copies from them, provided they give us 50%, not 47%. Then we shall take delivery of the books in three installments; first, two thousand copies; second, two thousand copies; and, again, one thousand copies. And as promised by them, they must give us 60 days sight for payment for each consignment. And we shall give them bank reference. I think this will be nice arrangement.

The distribution arrangement should be like this: That as soon as you get the first two thousand copies, you distribute to all the centers, according to the capacity, and I think the first distribution can be made like this: 500 copies to San Francisco, 500 copies to New York, and balance 1000 copies to different centers. We have got now about 14 centers: New York, San Francisco, Boston, Buffalo, Montreal, Santa Fe, Los Angeles, London, Berlin, Hawaii, and Florida, Seattle, and New Vrindaban. So if you distribute our books in that way, they can sell retail. I am sending Goursundar to Hawaii, and probably I shall send Chidananda to Florida. And I have received letter from Shivananda that in Germany, there is good prospect, and he is already trying to rent one very nice storefront, 300 marks rent per month. And two boys, Krishna das, and Uttama Sloka (a German boy) are going there very soon. So of course we do not expect to sell English books in Germany very much, but maybe somebody will be interested. But in England we can sell some books. So in this way, try to distribute and let us risk. But they must give us 60 days sight, and we shall take delivery 5000 copies in three installments. And they must allow us 50%, discount, not 47%. On these conditions you accept. And bank reference I shall give.

Regarding Mr. Wade's promise to Goursundar, to pay $225-$250, they must keep their promise. Otherwise, it will be not possible to do business with them, if they change their word of honor. You must say Mr. Wade like that. In business principle, what is promised, that must be kept. If the promise is not kept, then we are not going to deal with them, with such business firm, even it may be very big. That should be our principle also. So I think on this principle we can arrange with them, and I shall give you bank reference when they require.

We shall not sell a single copy to the store. Our principle should be to sell books retail in the Kirtan, in our temple, or selling by going door to door, or, individual persons. Not a single book should be sold to the stores. The store selling they may organize: we don't mind.

Regarding my Deity worship: I can understand that the regulative principles are taking much of your time, but you can minimize according to your convenience. There is no harm. But I am so glad to learn that this engagement makes one developing the Brahminical qualities. I thank you very much for appreciating this secret of worshiping the Lord. Generally, we in the conditioned state, we are contaminated. But, this worshiping system called "Arcana vidhi" cleanses the polluted heart and one becomes actually fit for becoming qualified Brahmin. So at least you be engaged in that way. Where is that boy Jaya Rama, who was taking care of it? So one by one, one should be engaged in that "Arcana vidhi" so that one may be fixed up in his Brahminical qualification.

Regarding Jaya Govinda's letter: You can reply that they can remain in India, on the following condition: That they must sell

last evening, and also last evening the thread ceremony was observed and many students given the sacred thread, and some were initiated. This morning I have to go to one meeting amongst the Indians and let me see how I can talk with them. As far as I can guess, that I may be called directly from San Francisco to Europe. In that case, it may be possible that I may stop for a day or two in New York, and then I start for Europe. What about the UN office. Ask Purushotam and let me know in detail what is the situation.

Hope this will cover all your enquires and you will do the needful. By the by, I am inquiring that you know two addresses in Hawaii, one university professor, and another gentleman who came to our temple and took records. So if you send the addresses to Gaurasundara immediately, either by letter or by phone, then he can utilize their friendly connection. Hope you are well,