680713 - Letter to Christopher written from Montreal 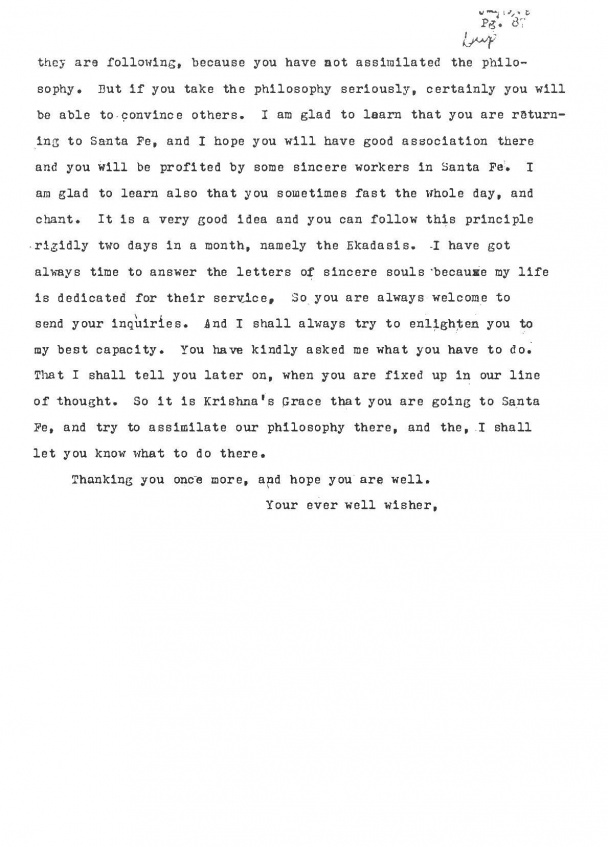 Please accept my blessings. I am in due receipt of your letter dated July 9, 1968, and I thank you very much. Previous to this I think I received one letter from you when I was either in San Francisco, or Los Angeles, and whenever I receive some letter, I reply it promptly, so it may be that my reply is missing due to your uncertain whereabouts.

I can understand that you are mixing with a crowd of hodge-podge men but none of them will ever get the real thing by such hodge-podge philosophy. We are following a standard philosophy, acknowledged by standard acaryas, namely,

The people of this age are of short duration of life, they are very slow in the matter of seriously understanding spiritual importance of life, and even some of them are inclined, like yourself, by misfortune they associate with hodge-podge men like those you have mentioned in your letter—namely, Yogananda, Alan Watts, Maharishi, Leary, etc.—because they are unfortunate and severely disturbed in mind on account of various frustrations and desires.

I am glad to learn that still you have got some glimpses of understanding Krishna Consciousness, and I hope this faint idea may one day develop into reality, and your life become successful. So far the hodge-podge men; they are gradually being defeated, and perhaps you may know that Maharishi Mahesa has left your land with great disappointment—but his mission to cheat your people was successful. He wanted to collect some money and he cheated so many people because they wanted to be cheated, and now he is in India, and so many western boys are still going there and paying some money for interview and hotel charges, and still following the so-called yoga system. I can challenge all this so-called yoga societies in the western countries that they are not standard in terms of Vedic yoga system. The preliminary processes of yoga system is to control the senses, and practice some bodily position by which the mind can be made fixed up on the point of Visnu Murti. But none of them do practice like that, but generally they are attracted by the bodily exercises only, haphazardly. And they take it as yoga practice. And others, they are addicted to sex indulgence and intoxication habit. Our system is completely different from theirs. In the beginning, we simply invite men to come and join us in the transcendental vibration by chanting Hare Krishna. We do not say that you pay me something and I give you this chanting. But this chanting is open without any secret, and we do not ask anyone to pay for it. But the chanting is transcendental, and therefore, simply by vibration, one gradually becomes spiritually advanced, and thus he offers himself to become my disciple. In that discipleship also, I do not charge anything. Neither do I offer anything new. I offer the same Hare Krishna beads, but it becomes spiritually powerful on account of being delivered in disciplic succession. And practically we see that the students who are initiated in this way, they are advancing slowly and surely, and any one of my students can challenge any student of so-called yogis, and that is practical evidence.

So, I would advise you not to waste your time in such hodge-podge society, but follow the principles rigidly, and faithfully, and your life will be successful. You say that you do not really know enough about what [text missing] they are following, because you have not assimilated the philosophy. But if you take the philosophy seriously, certainly you will be able to convince others. I am glad to learn that you are returning to Santa Fe, and I hope you will have good association there and you will be profitted by some sincere workers in Santa Fe. I am glad to learn also that you sometimes fast the whole day, and chant. It is a very good idea and you can follow this principle rigidly two days in a month, namely the Ekadasis. I have got always time to answer the letters of sincere souls because my life is dedicated for their service. So you are always welcome to send your inquiries. And I shall always try to enlighten you to my best capacity. You have kindly asked me what you have to do. That I shall tell you later on, when you are fixed up in our line of thought. So it is Krishna's Grace that you are going to Santa Fe, and try to assimilate our philosophy there, and then, I shall let you know what to do there.

Thanking you once more, and hope you are well,