680709 - Letter to Jadurani written from Montreal 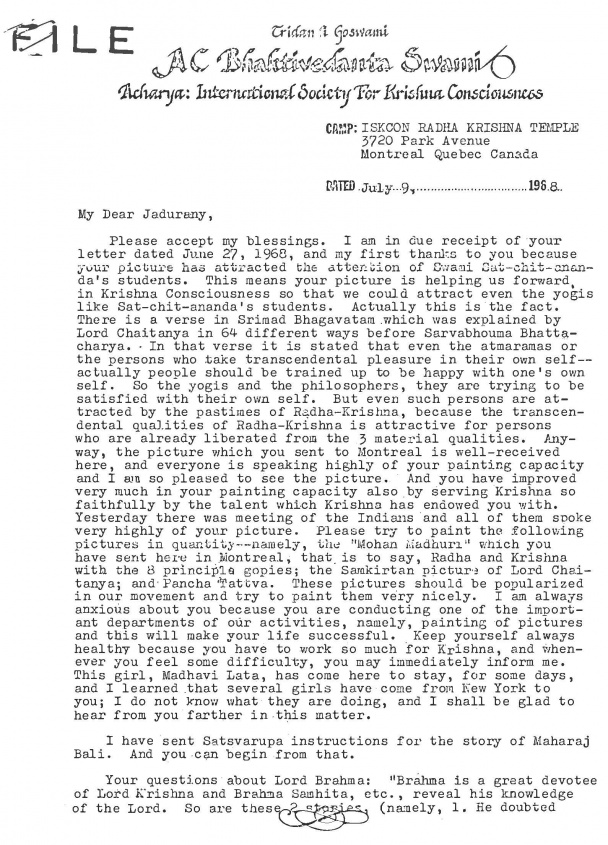 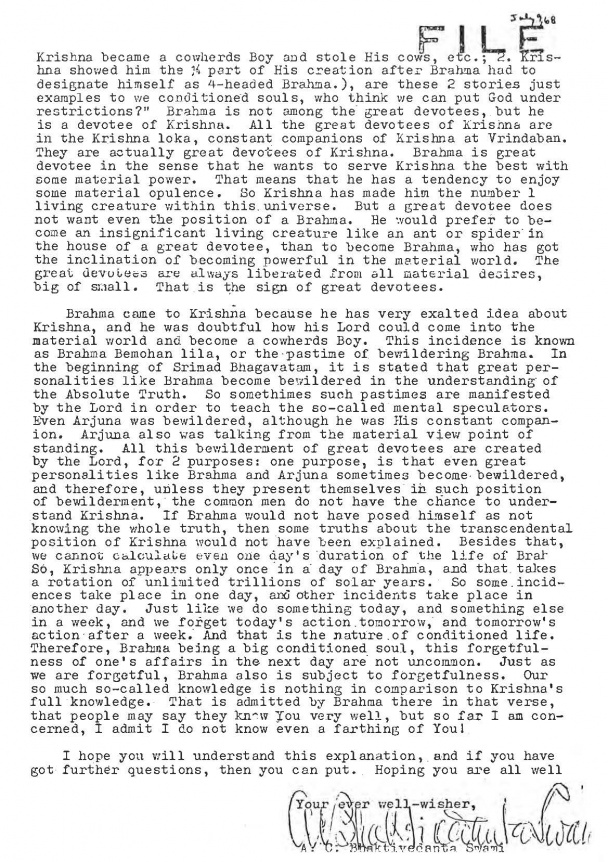 Please accept my blessings. I am in due receipt of your letter dated June 27, 1968, and my first thanks to you because your picture has attracted the attention of Swami Sat-chit-ananda's students. This means your picture is helping us forward in Krishna Consciousness so that we could attract even the yogis like Sat-chit-ananda's students. Actually this is the fact. There is a verse in Srimad Bhagavatam which was explained by Lord Chaitanya in 64 different ways before Sarvabhouma Bhattacharya. In that verse it is stated that even the atmaramas or the persons who take transcendental pleasure in their own self--actually people should be trained up to be happy with one's own self. So the yogis and the philosophers, they are trying to be satisfied with their own self. But even such persons are attracted by the pastimes of Radha-Krishna, because the transcendental qualities of Radha-Krishna is attractive for persons who are already liberated from the 3 material qualities. Anyway, the picture which you sent to Montreal is well-received here, and everyone is speaking highly of your painting capacity and I am so pleased to see the picture. And you have improved very much in your painting capacity also by serving Krishna so faithfully by the talent which Krishna has endowed you with. Yesterday there was meeting of the Indians and all of them spoke very highly of your picture. Please try to paint the following pictures in quantity--namely, the "Mohan Madhuri" which you have sent here in Montreal, that is to say, Radha and Krishna with the 8 principal gopies; the Samkirtan picture of Lord Chaitanya; and Panca Tattva. These pictures should be popularized in our movement and try to paint them very nicely. I am anxious about you because you are conducting one of the important departments of our activities, namely, painting of pictures and this will make your life successful. Keep yourself always healthy because you have to work so much for Krishna, and whenever you feel some difficulty, you may immediately inform me. This girl, Madhavi Lata, has come here to stay, for some days, and I learned that several girls have come from New York to you; I do not know what they are doing, and I shall be glad to hear from you farther in this matter.

I have sent Satsvarupa instructions for the story of Maharaj Bali. And you can begin from that.

Your questions about Lord Brahma: "Brahma is a great devotee of Lord Krishna and Brahma Samhita, etc., reveal his knowledge of the Lord. So are these 2 stories (namely, 1. He doubted Krishna became a cowherds Boy and stole His cows, etc.; 2. Krishna showed him the 1/4 part of His creation after Brahma had to designate himself as 4-headed Brahma.), are these 2 stories just examples to we conditioned souls, who think we can put God under restrictions?" Brahma is not among the great devotees, but he is a devotee of Krishna. All the great devotees of Krishna are in the Krishna loka, constant companions of Krishna at Vrindaban. They are actually great devotees of Krishna. Brahma is great devotee in the sense that he wants to serve Krishna the best with some material power. That means that he has a tendency to enjoy some material opulence. So Krishna has made him the number 1 living creature within this universe. But a great devotee does not want even the position of a Brahma. He would prefer to become an insignificant living creature like an ant or spider in the house of a great devotee, then to become Brahma, who has got the inclination of becoming powerful in the material world. The great devotees are always liberated from all material desires, big or small. That is the sign of great devotees.

Brahma came to Krishna because he has very exalted idea about Krishna, and he was doubtful how his Lord could come into the material world and become a cowherds boy. This incidence is known as Brahma Bemohan lila, or the pastime of bewildering Brahma. In the beginning of Srimad Bhagavatam, it is stated that great personalities like Brahma become bewildered in the understanding of the Absolute Truth. So sometimes such pastimes are manifested by the Lord in order to teach the so-called mental speculators. Even Arjuna was bewildered, although he was His constant companion. Arjuna also was talking from the material view point of standing. All this bewilderment of great devotees are created by the Lord, for 2 purposes: one purpose, is that even great personalities like Brahma and Arjuna sometimes become bewildered, and therefore, unless they present themselves in such position of bewilderment, the common men do not have the chance to understand Krishna. If Brahma would not have posed himself as not knowing the whole truth, then some truths about the transcendental position of Krishna would not have been explained. Besides that, we cannot calculate even one day's duration of the life of Brahma. So, Krishna appears only once in a day of Brahma, and that takes a rotation of unlimited trillions of solar years. So some incidences take place in one day, and other incidents take place in another day. Just like we do something today, something else in a week, and we forget today's action tomorrow, and tomorrow's action after a week. And that is the nature of conditioned life. Therefore, Brahma being a big conditioned soul, this forgetfulness of one's affairs in the next day are not uncommon. Just as we are forgetful, Brahma also is subject to forgetfulness. Our so much so-called knowledge is nothing in comparison to Krishna's full knowledge. That is admitted by Brahma there in that verse, that people may say they know You very well, but so far I am concerned, I admit I do not know even a farthing of You!

I hope you will understand this explanation, and if you have got further questions, then you can put. Hoping you are all well.