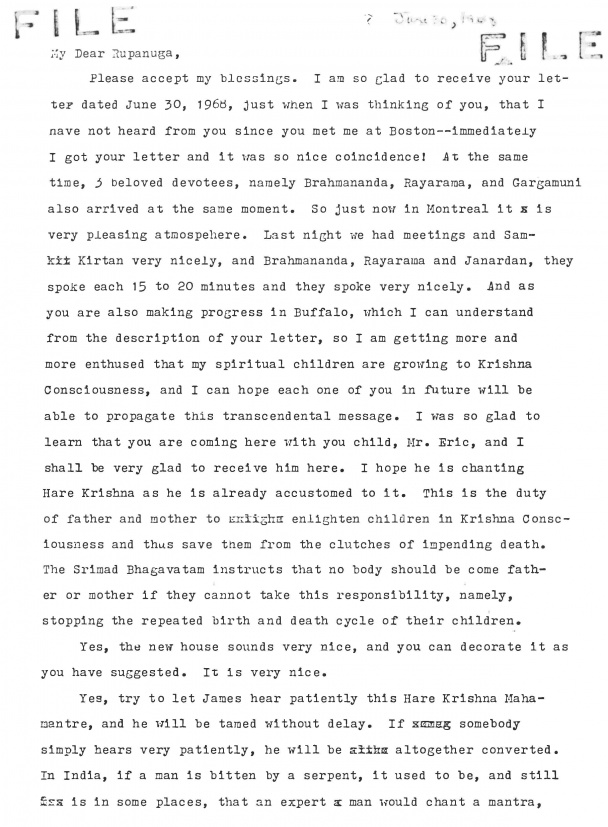 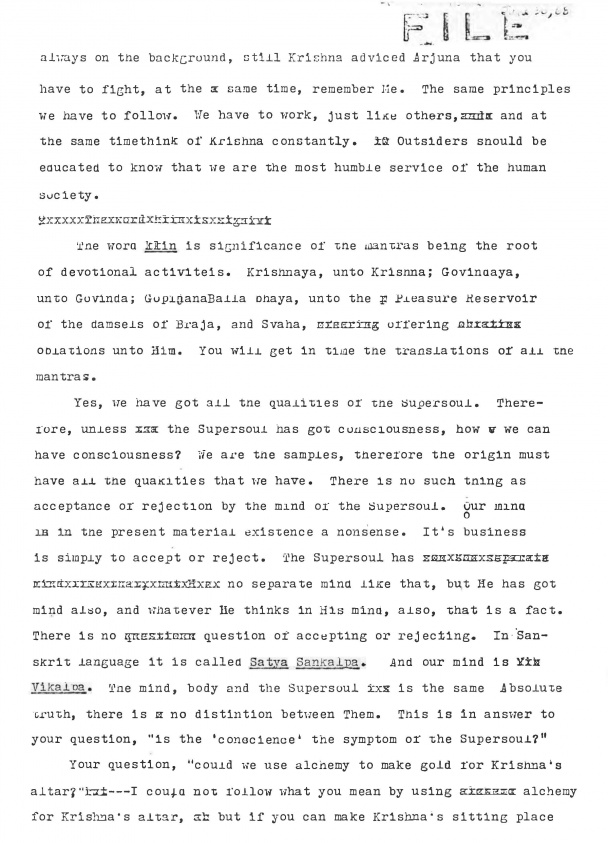 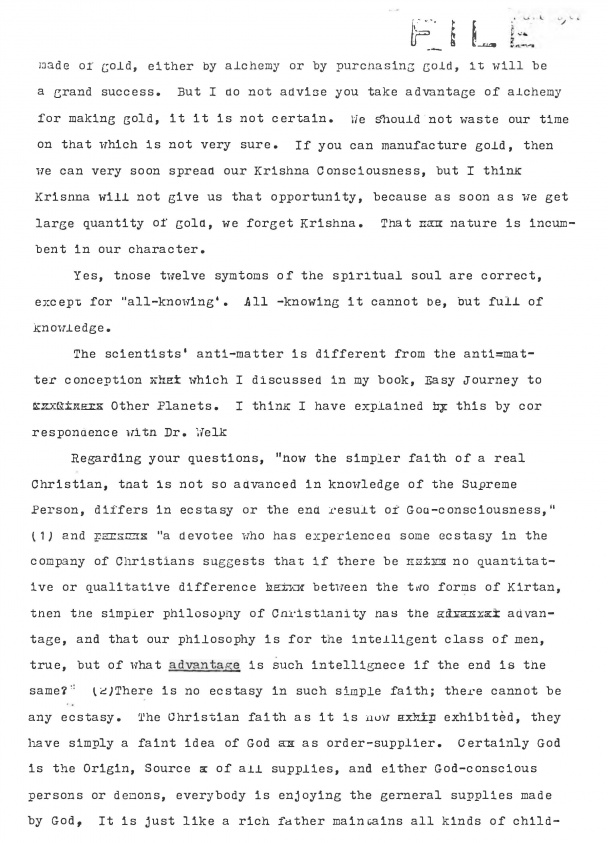 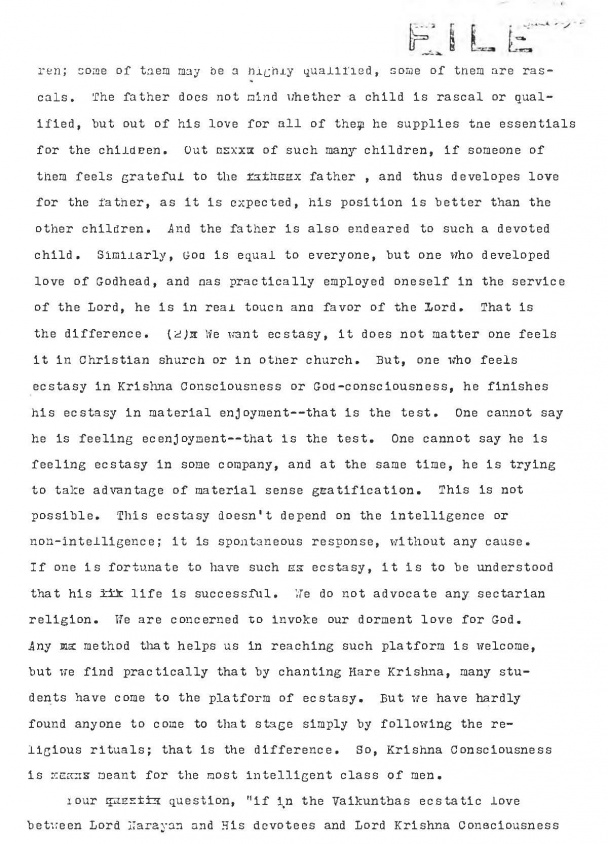 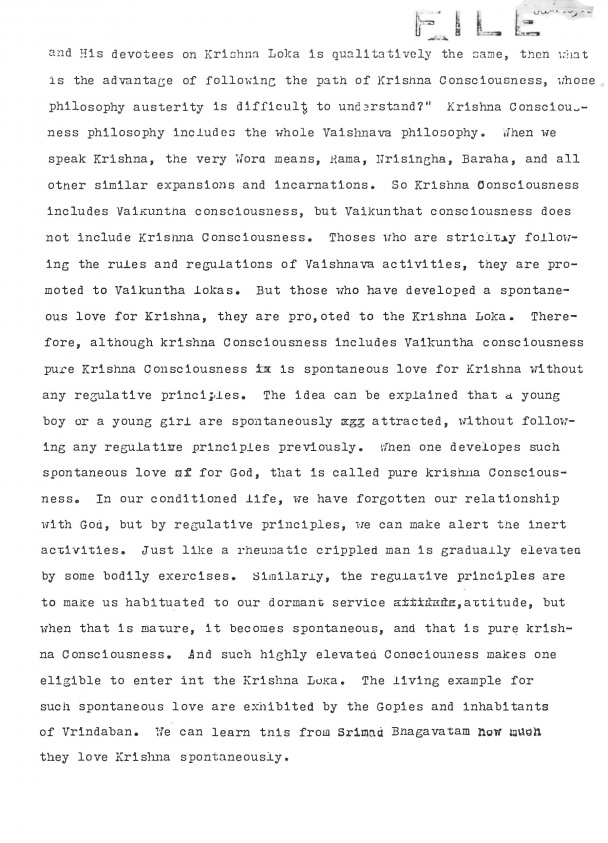 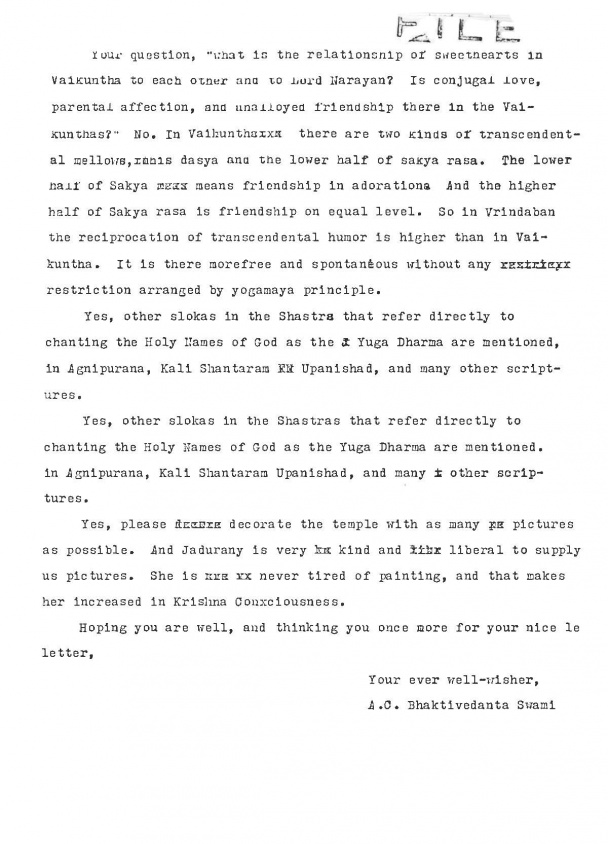 Please accept my blessings. I am so glad to receive your letter dated June 30, 1968, just when I was thinking of you, that I have not heard from you since you met me at Boston--immediately I got your letter and it was so nice coincidence! At the same time, 3 beloved devotees, namely Brahmananda, Rayaram, and Gargamuni also arrived at the same moment. So just now in Montreal it is very pleasing atmosphere. Last night we had meetings and Samkirtan very nicely, and Brahmananda, Rayaram and Janardan, they spoke each 15 to 20 minutes and they spoke very nicely. And as you are also making progress in Buffalo, which I can understand from the description of your letter, so I am getting more and more enthused that my spiritual children are growing to Krishna Consciousness, and I can hope each one of you in future will be able to propagate this transcendental message. I was so glad to learn that you are coming here with your child, Mr. Eric, and I shall be very glad to receive him here. I hope he is chanting Hare Krishna as he is already accustomed to it. This is the duty of father and mother to enlighten children in Krishna Consciousness and thus save them from the clutches of impending death. The Srimad-Bhagavatam instructs that no body should become father or mother if they cannot take this responsibility, namely, stopping the repeated birth and death cycle of their children.

Yes, try to let James hear patiently this Hare Krishna Mahamantra, and he will be tamed without delay. If somebody simply hears very patiently, he will be altogether converted. In India, if a man is bitten by a serpent, it used to be, and still is in some places, that an expert man would chant a mantra, [and apply some herbs, and the serpent-bitten man would be saved from death. Similarly, we are bitten by the maya-serpent, and the mantra to save us is Hare Krishna. It is Lord Chaitanya's mantra.

Yes, I quite agree with you, on this money subject. This subject matter I have discussed here also. The difficulty is that in your country the Brahmacaries cannot go and beg from door to door, therefore the process which is now adopted by Hamsaduta is coming to be very hopeful. But boys who are not engaged in the temple service during daytime must try to get some money be working or some other way. Without money it is not possible to exist in the material world. Although Krishna is] [text missing] always on the background, still Krishna advised Arjuna that you have to fight, at the same time, remember Me. The same principles we have to follow. We have to work, just like others, and at the same time think of Krishna constantly. Outsiders should be educated to know that we are the most humble service of the human society.

The word klin is significance of the mantras being the root of devotional activities. Krishnaya, unto Krishna; Govindaya, unto Govinda; Gopijanavallabhaya, unto the Pleasure Reservoir of the damsels of Braja, and Svaha, offering oblations unto Him. You will get in time the translations of all the mantras.

Your question, "could we use alchemy to make gold for Krishna's altar?" but---I could not follow what you mean by using alchemy for Krishna's altar, but if you can make Krishna's sitting place made of gold, either by alchemy or by purchasing gold, it will be a grand success. But I do not advise you take advantage of alchemy for making gold, it it is not certain. We should not waste our time on that which is not very sure. If you can manufacture gold, then we can very soon spread our Krishna Consciousness, but I think Krishna will not give us that opportunity, because as soon as we get large quantity of gold, we forget Krishna. That nature is incumbent in our character.

Regarding your questions, "how the simpler faith of a real Christian, that is not so advanced in knowledge of the Supreme Person, differs in ecstasy or the end result of God-consciousness," (1) and persons "a devotee who has experienced some ecstasy in the company of Christians suggests that if there be no quantitative or qualitative difference between the two forms of Kirtan, then the simpler philosophy of Christianity has the advantage, and that our philosophy is for the intelligent class of men, true, but of what advantage is such intelligence if the end is the same?" (2) There is no ecstasy in such simple faith; there cannot be any ecstasy. The Christian faith as it is now exhibited, they have simply a faint idea of God as order-supplier. Certainly God is the Origin, Source of all supplies, and either God-conscious persons or demons, everybody is enjoying the general supplies made by God. It is just like a rich father maintains all kinds of children; some of them may be a highly qualified, some of them are rascals. The father does not mind whether a child is rascal or qualified, but out of his love for all of them he supplies the essentials for the children. Out of such many children, if someone of them feels grateful to the father, and thus develops love for the father, as it is expected, his position is better than the other children. And the father is also endeared to such a devoted child. Similarly, God is equal to everyone, but one who developed love of Godhead, and has practically employed oneself in the service of the Lord, he is in real touch and favor of the Lord. That is the difference. (2) We want ecstasy, it does not matter one feels it in Christian church or in other church. But, one who feels ecstasy in Krishna Consciousness or God-consciousness, he finishes his ecstasy in material enjoyment--that is the test. One cannot say he is feeling enjoyment--that is the test. One cannot say he is feeling ecstasy in some company, and at the same time, he is trying to take advantage of material sense gratification. This is not possible. This ecstasy doesn't depend on the intelligence or non-intelligence; it is spontaneous response, without any cause. If one is fortunate to have such ecstasy, it is to be understood that his life is successful. We do not advocate any sectarian religion. We are concerned to invoke our dormant love for God. Any method that helps us in reaching such platform is welcome, but we find practically that by chanting Hare Krishna, many students have come to the platform of ecstasy. But we have hardly found anyone to come to that stage simply by following the religious rituals; that is the difference. So, Krishna Consciousness is meant for the most intelligent class of men.

Yes, other slokas in the Shastras that refer directly to chanting the Holy Names of God as the Yuga Dharma are mentioned, in Agnipurana, Kali Shantaram Upanishad, and many other scriptures.