680616 - Letter to Satsvarupa written from Montreal 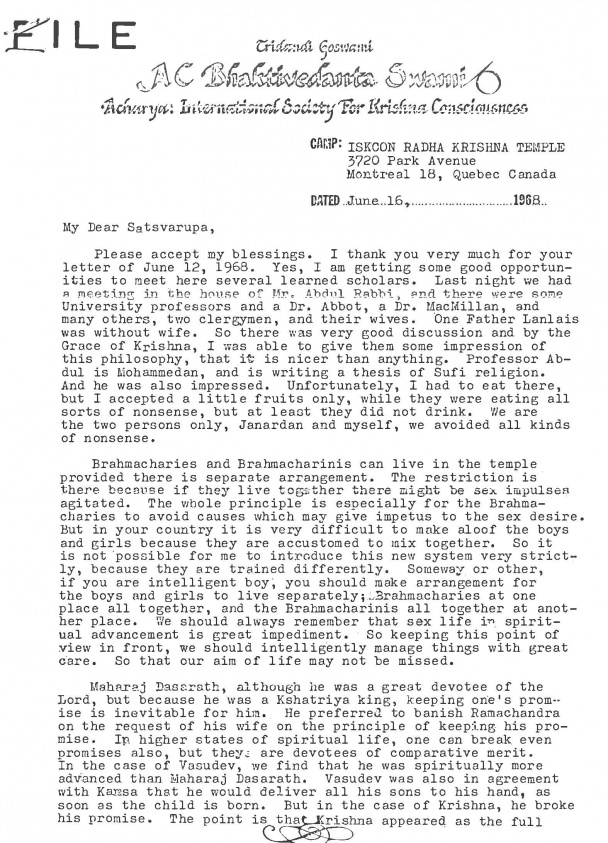 Letter to Satsvarupa (Page 1 of 2) 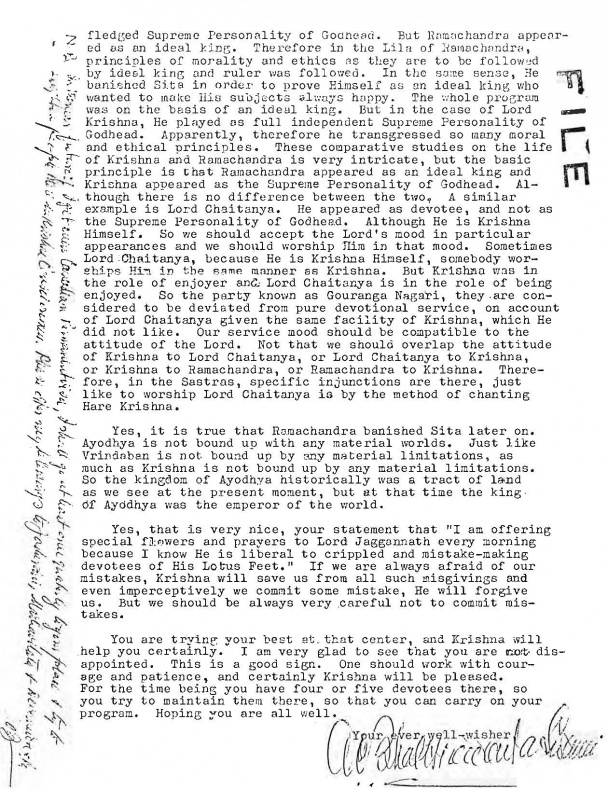 Letter to Satsvarupa (Page 2 of 2)

Please accept my blessings. I thank you very much for your letter of June 12, 1968. Yes, I am getting some good opportunities to meet here several learned scholars. Last night we had a meeting in the house of Mr. Abdul Rabbi, and there were some University professors and a Dr. Abbot, a Dr. MacMillan, and many others, two clergymen, and their wives. One Father Lanlais was without wife. So there was very good discussion and by the Grace of Krishna, I was able to give them some impression of this philosophy, that it is nicer than anything. Professor Abdul is Mohammedan, and is writing a thesis of Sufi religion. And he was also impressed. Unfortunately, I had to eat there, but I accepted a little fruits only, while they were eating all sorts of nonsense, but at least they did not drink. We are the two persons only, Janardan and myself, we avoided all kinds of nonsense.

Brahmacharies and Brahmacharinis can live in the temple provided there is separate arrangement. The restriction is there because if they live together there might be sex impulses agitated. The whole principle is especially for the Brahmacharies to avoid causes which may give impetus to the sex desire. But in your country it is very difficult to make aloof the boys and girls because they are accustomed to mix together. So it is not possible for me to introduce this new system very strictly, because they are trained differently. Someway or other, if you are intelligent boy, you should make arrangement for the boys and girls to live separately; Brahmacharies at one place all together, and the Brahmacharinis all together at another place. We should always remember that sex life in spiritual advancement is great impediment. So keeping this point of view in front, we should intelligently manage things with great care. So that our aim of life may not be missed.

Maharaj Dasarath, although he was a great devotee of the Lord, but because he was a Kshatriya king, keeping one's promise is inevitable for him. He preferred to banish Ramachandra on the request of his wife on the principle of keeping his promise. In higher states of spiritual life, one can break even promises also, but they are devotees of comparative merit. In the case of Vasudev, we find that he was spiritually more advanced than Maharaj Dasarath. Vasudev was also in agreement with Kamsa that he would deliver all his sons to his hand, as soon as the child is born. But in the case of Krishna he broke his promise. The point is that Krishna appeared as the full fledged Supreme Personality of Godhead. But Ramachandra appeared as an ideal king. Therefore in the Lila of Ramachandra, principles of morality and ethics as they are to be followed by ideal king and ruler was followed. In the same sense, He banished Sita in order to prove Himself as an ideal king who wanted to make His subjects always happy. The whole program was on the basis of an ideal king. But in the case of Lord Krishna, He played as full independent Supreme Personality of Godhead. Apparently, therefore he transgressed so many moral and ethical principles. These comparative studies on the life of Krishna and Ramachandra is very intricate, but the basic principle is that Ramachandra appeared as an ideal king and Krishna appeared as the Supreme Personality of Godhead. Although there is no difference between the two. A similar example is Lord Chaitanya. He appeared as devotee, and not as the Supreme Personality of Godhead. Although He is Krishna Himself. So we should accept the Lord's mood in particular appearances and we should worship Him in that mood. Sometimes Lord Chaitanya, because He is Krishna Himself, somebody worships Him in the same manner as Krishna. But Krishna was in the role of enjoyer and Lord Chaitanya is in the role of being enjoyed. So the party known as Gouranga Nagari, they are considered to be deviated from pure devotional service, on account of Lord Chaitanya given the same facility of Krishna, which He did not like. Our service mood should be compatible to the attitude of the Lord. Not that we should overlap the attitude of Krishna to Lord Chaitanya, or Lord Chaitanya to Krishna, or Krishna to Ramacahndra, or Ramachandra to Krishna. Therefore, in the Sastras, specific injunctions are there, just like to worship Lord Chaitanya is by the method of chanting Hare Krishna.

Yes, that is very nice, your statement that "I am offering special flowers and prayers to Lord Jaggannath every morning because I know He is liberal to crippled and mistake-making devotees of His Lotus Feet." If we are always afraid of our mistakes, Krishna will save us from all such misgivings and even imperceptibly we commit some mistake, He will forgive us. But we should be always very careful not to commit mistakes.

You are trying your best at that center, and Krishna will help you certainly. I am very glad to see that you are not disappointed. This is a good sign. One should work with courage and patience, and certainly Krishna will be pleased. For the time being you have four or five devotees there, so you try to maintain them there, so that you can carry on your program. Hoping you are all well.

N. B. In the near future if I get even Canadian Permanent Visa, I shall go at least once quarterly to your place & try to enlighten people there in Krishna Consciousness. Please offer my blessings to Jadurany, [unclear] & [unclear]. [handwritten]