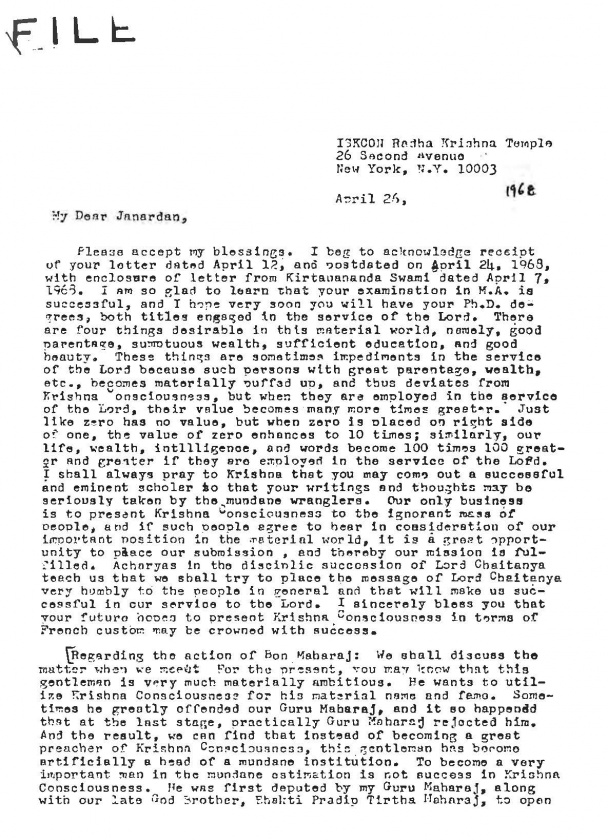 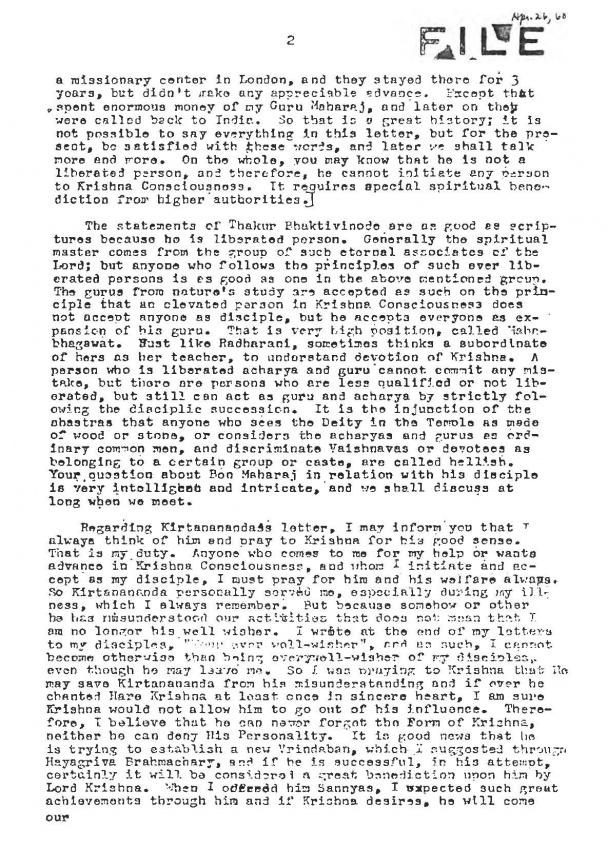 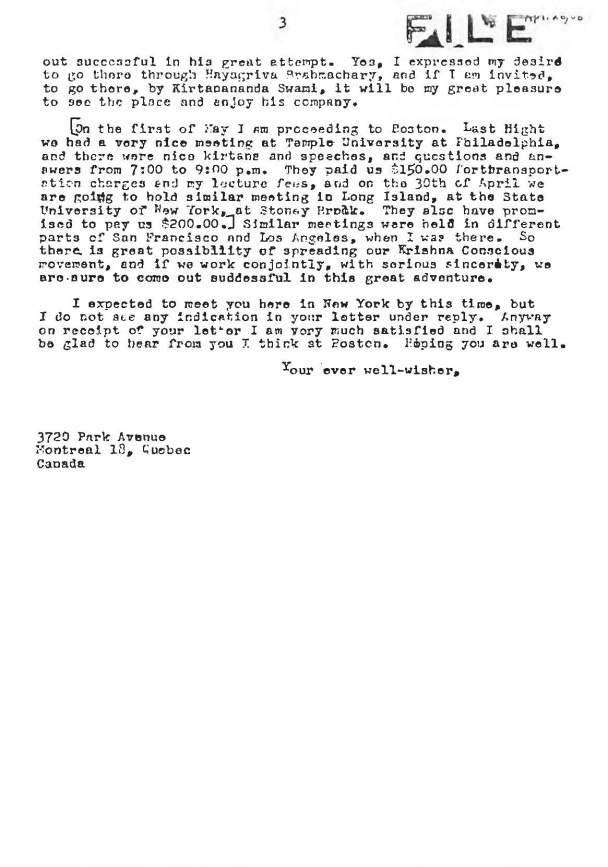 Please accept my blessings. I beg to acknowledge receipt of your letter dated April 12, and postdated on April 24, 1968, with enclosure of letter from Kirtanananda Swami dated April 7, 1968. I am so glad to learn that your examination in M.A. is successful, and I hope very soon you will have your Ph.D. degrees, both titles engaged in the service of the Lord. There are four things desirable in this material world, namely, good parentage, sumptuous wealth, sufficient education, and good beauty. These things are sometimes impediments in the service of the Lord because such persons with great parentage, wealth, etc., becomes materially puffed up, and thus deviates from Krishna Consciousness, but when they are employed in the service of the Lord, their value becomes many more times greater. Just like zero has no value, but when zero is placed on right side of one, the value of zero enhances to 10 times; similarly, our life, wealth, intelligence, and words become 100 times 100 greater and greater if they are employed in the service of the Lord. I shall always pray to Krishna that you may come out a successful and eminent scholar so that your writings and thoughts may be seriously taken by the mundane wranglers. Our only business is to present Krishna Consciousness to the ignorant mass of people, and if such people agree to hear in consideration of our important position in the material world, it is a great opportunity to place our submission, and thereby our mission is fulfilled. Acharyas in the disciplic succession of Lord Chaitanya teach us that we shall try to place the message of Lord Chaitanya very humbly to the people in general and that will make us successful in our service to the Lord. I sincerely bless you that your future hopes to present Krishna Consciousness in terms of French custom may be crowned with success.

Regarding the action of Bon Maharaj: We shall discuss the matter when we meet. For the present, you may know that this gentleman is very much materially ambitious. He wants to utilize Krishna Consciousness for his material name and fame. Sometimes he greatly offended our Guru Maharaj, and it so happened that at the last stage, practically Guru Maharaj rejected him. And the result, we can find that instead of becoming a great preacher of Krishna Consciousness, this gentleman has become artificially a head of a mundane institution. To become a very important man in the mundane estimation is not success in Krishna Consciousness. He was first deputed by my Guru Maharaj, along with our late God Brother, Bhakti Pradip Tirtha Maharaj, to open a missionary center in London, and they stayed there for 3 years, but didn't make any appreciable advance. Except that spent enormous money of my Guru Maharaj, and later on they were called back to India. So that is a great history; it is not possible to say everything in this letter, but for the present, be satisfied with these words, and later we shall talk more and more. On the whole, you may know that he is not a liberated person, and therefore, he cannot initiate any person to Krishna Consciousness. It requires special spiritual benediction from higher authorities.

The statements of Thakur Bhaktivinode are as good as scriptures because he is liberated person. Generally the spiritual master comes from the group of such eternal associates of the Lord; but anyone who follows the principles of such ever liberated persons is as good as one in the above mentioned group. The gurus from nature's study are accepted as such on the principle that an elevated person in Krishna Consciousness does not accept anyone as disciple, but he accepts everyone as expansion of his guru. That is very high position, called Maha-bhagawat. Just like Radharani, sometimes thinks a subordinate of hers as her teacher, to understand devotion of Krishna. A person who is liberated acharya and guru cannot commit any mistake, but there are persons who are less qualified or not liberated, but still can act as guru and acharya by strictly following the disciplic succession. It is the injunction of the shastras that anyone who sees the Deity in the Temple as made of wood or stone, or considers the acharyas and gurus as ordinary common men, and discriminate Vaishnavas or devotees as belonging to a certain group or caste, are called hellish. Your question about Bon Maharaj in relation with his disciple is very intelligent and intricate, and we shall discuss at long when we meet.

Regarding Kirtanananda's letter, I may inform you that I always think of him and pray to Krishna for his good sense. That is my duty. Anyone who comes to me for my help or wants advance in Krishna Consciousness, and whom I initiate and accept as my disciple, I must pray for him and his welfare always. So Kirtanananda personally served me, especially during my illness, which I always remember. But because somehow or other he has misunderstood our activities that does not mean that I am no longer his well wisher. I write at the end of my letters to my disciples, "Your ever well-wisher", and as such, I cannot become otherwise than being ever well-wisher of my disciples, even though he may leave me. So I was praying to Krishna that He may save Kirtanananda from his misunderstanding and if ever he chanted Hare Krishna at least once in sincere heart, I am sure Krishna would not allow him to go out of his influence. Therefore, I believe that he can never forget the Form of Krishna, neither he can deny His Personality. It is good news that he is trying to establish a new Vrindaban, which I suggested through Hayagriva Brahmachary, and if he is successful, in his attempt, certainly it will be considered a great benediction upon him by Lord Krishna. When I offered him Sannyas, I expected such great achievements through him and if Krishna desires, he will come out successful in his great attempt. Yes, I expressed my desire to go there through Hayagriva Brahmachary, and if I am invited, to go there, by Kirtanananda Swami, it will be my great pleasure to see the place and enjoy his company.

On the first of May I am proceeding to Boston. Last night we had a very nice meeting at Temple University at Philadelphia, and there were nice kirtans and speeches, and questions and answers from 7:00 to 9:00 p.m. They paid us $150.00 for transportation charges and my lecture fees, and on the 30th of April we are going to hold similar meeting in Long Island, at the State University of New York, at Stoney Brook. They also have promised to pay us $200.00. Similar meetings were held in different parts of San Francisco and Los Angeles, when I was there. So there is great possibility of spreading our Krishna Conscious movement, and if we work conjointly, with serious sincerity, we are sure to come out successful in this great adventure.

I expected to meet you here in New York by this time, but I do not see any indication in your letter under reply. Anyway on receipt of your letter I am very much satisfied and I shall be glad to hear from you I think at Boston. Hoping you are well.