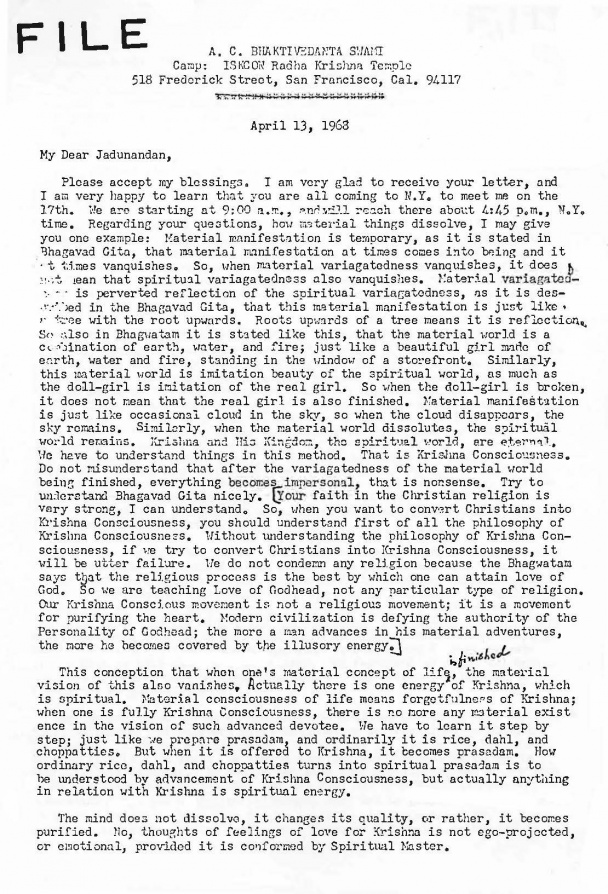 Letter to Jadunandan (Page 1 of 3) 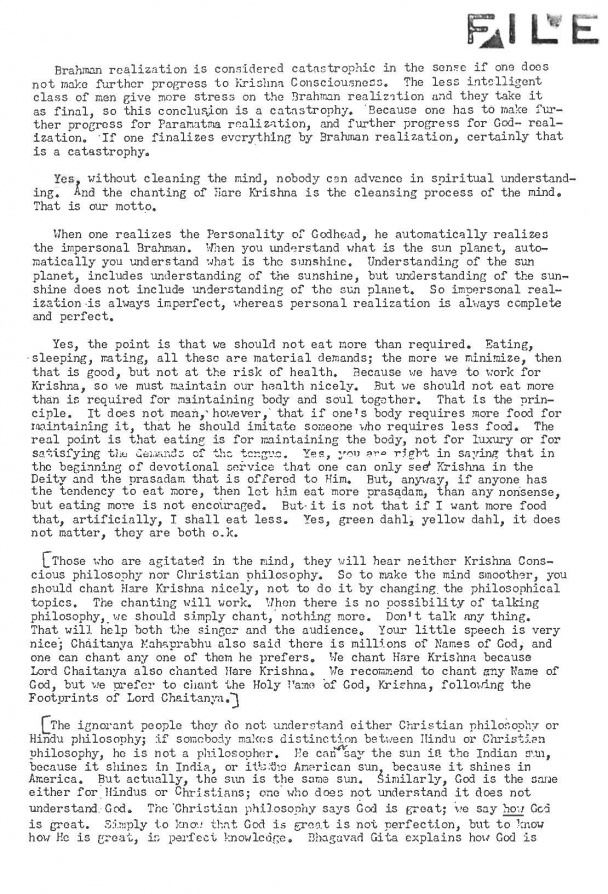 Letter to Jadunandan (Page 2 of 3) 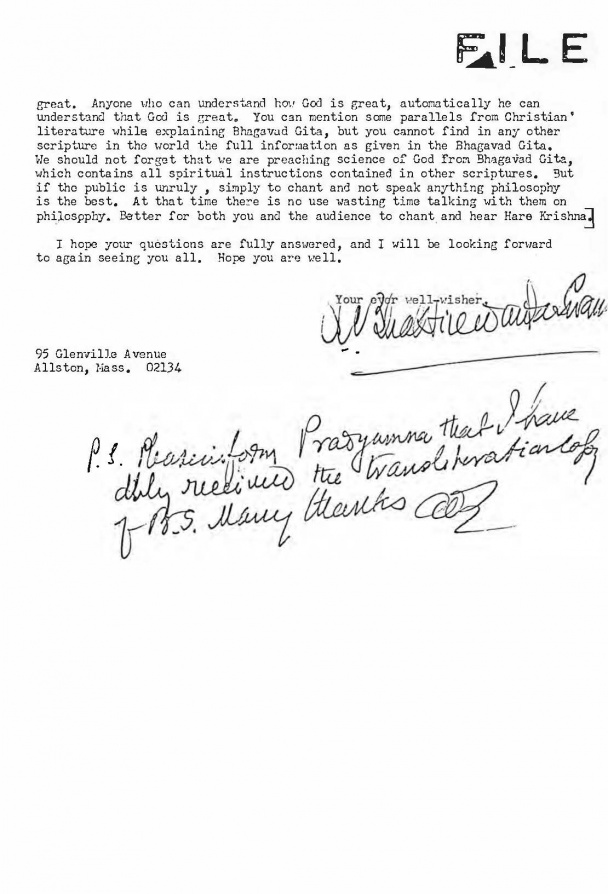 Letter to Jadunandan (Page 3 of 3)

Please accept my blessings. I am very glad to receive your letter, and I am very happy to learn that you are all coming to N.Y. to meet me on the 17th. We are starting at 9:00 a.m., and will reach there about 4:45 p.m., N.Y. time. Regarding your questions, how material things dissolve, I may give you one example: Material manifestation is temporary, as it is stated in Bhagavad Gita, that material manifestation at times comes into being and it at times vanquishes. So, when material variegatedness vanquishes, it does not mean that spiritual variegatedness also vanquishes. Material variegatedness is perverted reflection of the spiritual variegatedness, as it is described in the Bhagavad Gita, that this material manifestation is just like a tree with the root upwards. Roots upwards of a tree means it is reflection. So also in Bhagwatam it is stated like this, that the material world is a combination of earth, water, and fire; just like a beautiful girl made of earth, water and fire, standing in the window of a storefront. Similarly, this material world is imitation beauty of the spiritual world, as much as the doll-girl is imitation of the real girl. So when the doll-girl is broken, it does not mean that the real girl is also finished. Material manifestation is just like occasional cloud in the sky, so when the cloud disappears, the sky remains. Similarly, when the material world dissolutes, the spiritual world remains. Krishna and His Kingdom, the spiritual world, are eternal. We have to understand things in this method. That is Krishna Consciousness. Do not misunderstand that after the variegatedness of the material world being finished, everything becomes impersonal, that is nonsense. Try to understand Bhagavad Gita nicely. Your faith in the Christian religion is very strong, I can understand. So, when you want to convert Christians into Krishna Consciousness, you should understand first of all the philosophy of Krishna Consciousness. Without understanding the philosophy of Krishna Consciousness, if we try to convert Christians into Krishna Consciousness, it will be utter failure. We do not condemn any religion because the Bhagwatam says that the religious process is the best by which one can attain love of God. So we are teaching Love of Godhead, not any particular type of religion. Our Krishna Conscious movement is not a religious movement; it is a movement for purifying the heart. Modern civilization is defying the authority of the Personality of Godhead; the more a man advances in his material adventures, the more he becomes covered by the illusory energy.

This conception that when one's material concept of life is finished, [handwritten] the material vision of this also vanishes. Actually there is one energy of Krishna, which is spiritual. Material consciousness of life means forgetfulness of Krishna; when one is fully Krishna Consciousness, there is no more any material existence in the vision of such advanced devotee. We have to learn it step by step; just like we prepare prasadam, and ordinarily it is rice, dahl, and choppatties. But when it is offered to Krishna, it becomes prasadam. How ordinary rice, dahl, and choppatties turns into spiritual prasadam is to be understood by advancement of Krishna Consciousness, but actually anything in relation with Krishna is spiritual energy.

The mind does not dissolve, it changes its quality, or rather, it becomes purified. No, thoughts of feelings of love for Krishna is not ego-projected, or emotional, provided it is conformed by Spiritual Master.

Yes, without cleaning the mind, nobody can advance in spiritual understanding. And the chanting of Hare Krishna is the cleansing process of the mind. That is our motto.

Yes, the point is that we should not eat more than required. Eating, sleeping, mating, all these are material demands; the more we minimize, then that is good, but not at the risk of health. Because we have to work for Krishna, so we must maintain our health nicely. But we should not eat more than is required for maintaining body and soul together. That is the principle. It does not mean, however, that if one's body requires more food for maintaining it, that he should imitate someone who requires less food. The real point is that eating is for maintaining the body, not for luxury or for satisfying the demands of the tongue. Yes, you are right in saying that in the beginning of devotional service that one can only see Krishna in the Deity and the prasadam that is offered to Him. But, anyway, if anyone has the tendency to eat more, then let him eat more prasadam, than any nonsense, but eating more is not encouraged. But it is not that if I want more food that, artificially, I shall eat less. Yes, green dahl, yellow dahl, it does not matter, they are both o.k.

Those who are agitated in the mind, they will hear neither Krishna Conscious philosophy nor Christian philosophy. So to make the mind smoother, you should chant Hare Krishna nicely, not to do it by changing the philosophical topics. The chanting will work. When there is no possibility of talking philosophy, we should simply chant, nothing more. Don't talk any thing. That will help both the singer and the audience. Your little speech is very nice; Chaitanya Mahaprabhu also said there is millions of Names of God; and one can chant any one of them he prefers. We chant Hare Krishna because Lord Chaitanya also chanted Hare Krishna. We recommend to chant any Name of God, but we prefer to chant the Holy Name of God, Krishna, following the Footprints of Lord Chaitanya.

The ignorant people they do not understand either Christian philosophy or Hindu philosophy; if somebody makes distinction between Hindu or Christian philosophy, he is not a philosopher. He can not [handwritten] say the sun is the Indian sun, because it shines in India, or it's the American sun because it shines in America. But actually, the sun is the same sun. Similarly, God is the same either for Hindus or Christians; one who does not understand it does not understand God. The Christian philosophy says God is great; we say how God is great. Simply to know that God is great is not perfection, but to know how He is great, is perfect knowledge. Bhagavad Gita explains how God is great. Anyone who can understand how God is great, automatically he can understand that God is great. You can mention some parallels from Christian literature while explaining Bhagavad Gita, but you cannot find in any other scripture in the world the full information as given in the Bhagavad Gita. We should not forget that we are preaching science of God from Bhagavad Gita, which contains all spiritual instructions contained in other scriptures. But if the public is unruly, simply to chant and not speak anything philosophy is the best. At that time there is no use wasting time talking with them on philosophy. Better for both you and the audience to chant and hear Hare Krishna.

I hope your questions are fully answered, and I will be looking forward to again seeing you all. Hope you are well.


P.S. Please inform Pradyumna that I have duly received the transliteration of B.S. Many thanks. [handwritten]