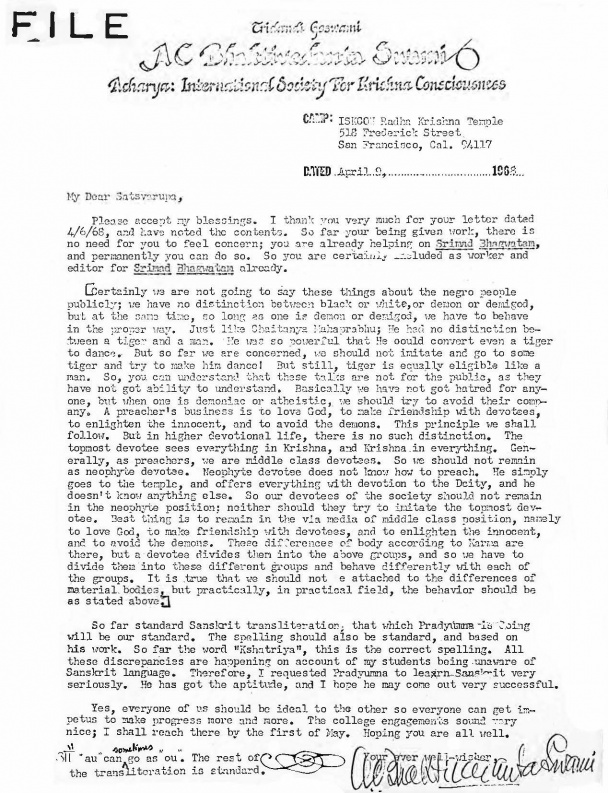 Please accept my blessings. I thank you very much for your letter dated 4/6/68, and have noted the contents. So far your being given work, there is no need for you to feel concern; you are already helping on Srimad Bhagwatam, and permanently you can do so. So you are certainly included as worker and editor for Srimad Bhagwatam already.

Certainly we are not going to say these things about the negro people publicly; we have no distinction between black or white, or demon or demigod, but at the same time, so long as one is demon or demigod, we have to behave in the proper way. Just like Chaitanya Mahaprabhu; He had no distinction between a tiger and a man. He was so powerful that He could convert even a tiger to dance. But so far as we are concerned, we should not imitate and go to some tiger and try to make him dance! But still, tiger is equally eligible like a man. So, you can understand that these talks are not for the public, as they have not got the ability to understand. Basically we have not got hatred for anyone, but when one is demoniac or atheistic, we should try to avoid their company. A preacher's business is to love God, to make friendship with devotees, to enlighten the innocent, and to avoid the demons. This principle we shall follow. But in higher devotional life, there is no such distinction. The topmost devotee sees everything in Krishna, and Krishna in everything. Generally, as preachers, we are middle class devotees. So we should not remain as neophyte devotee. Neophyte devotee does not know how to preach. He simply goes to the temple, and offers everything with devotion to the Deity, and he doesn't know anything else. So our devotees of the society should not remain in the neophyte position; neither should they try to imitate the topmost devotee. Best thing is to remain in the via media of middle class position, namely to love God, to make friendship with devotees, and to enlighten the innocent, and to avoid the demons. These differences of body according to Karma are there, but a devotee divides them into the above groups, and so we have to divide them into these different groups and behave differently with each of the groups. It is true that we should not be attached to the differences of material bodies, but practically, in practical field, the behavior should be as stated above.

So far standard Sanskrit transliteration, that which Pradyumna is doing will be our standard. The spelling should also be standard, and based on his work. So far the word "Kshatriya", this is the correct spelling. All these discrepancies are happening on account of my students being unaware of Sanskrit language. Therefore, I requested Pradyumna to learn Sanskrit very seriously. He has got the aptitude, and I hope he may come out very successful.

Yes, everyone of us should be ideal to the other so everyone can get impetus to make progress more and more. The college engagements sound very nice; I shall reach there by the first of May. Hoping you are all well.

"au" can sometimes [handwritten] go as "ou." The rest of the transliteration is standard.