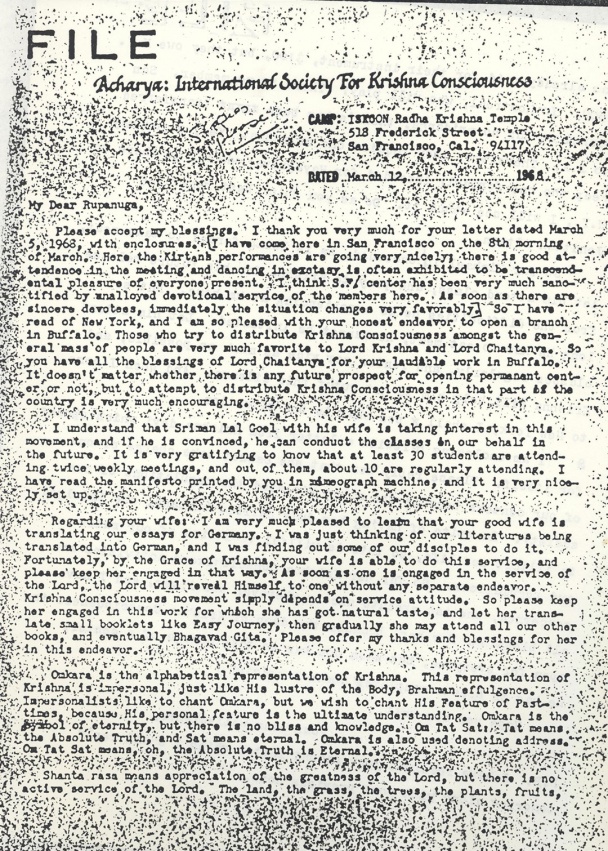 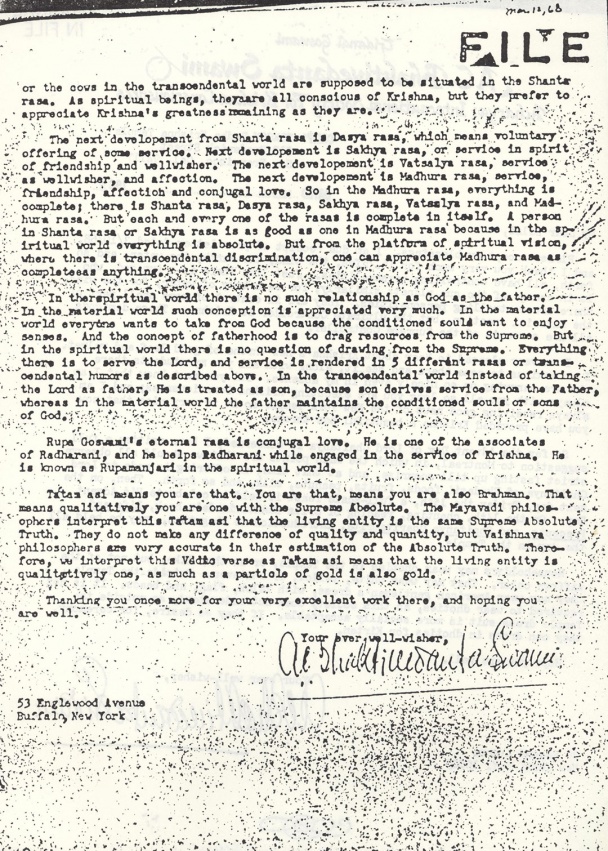 Please accept my blessings. I thank you very much for your letter dated March 5, 1968, with enclosures. I have come here in San Francisco on the 8th morning of March. Here the kirtan performances are going very nicely; there is good attendance in the meeting and dancing in ecstasy is often exhibited to the transcendental pleasure of everyone present. I think S.F. center has been very much sanctified by unalloyed devotional service of the members here. As soon as there are sincere devotees, immediately the situation changes very favorably. So I have read of New York, and I am so pleased with your honest endeavor to open a branch in Buffalo. Those who try to distribute Krishna Consciousness amongst the general mass of people are very much favorite to Lord Krishna and Lord Chaitanya. So you have all the blessings of Lord Chaitanya for your laudable work in Buffalo. It doesn't matter whether there is any future prospect for opening permanent center or not, but to attempt to distribute Krishna Consciousness in that part of the country is very much encouraging.

I understand that Sriman Lal Goel with his wife is taking interest in this movement, and if he is convinced, he can conduct the classes on our behalf in the future. It is very gratifying to know that at least 30 students are attending twice weekly meetings, and out of them, about 10 are regularly attending. I have read the manifesto printed by you in mimeograph machine, and it is very nicely set up.

Regarding your wife: I am very much pleased to learn that your good wife is translating our essays for Germany. I was just thinking of our literatures being translated into German, and I was finding out some of our disciples to do it. Fortunately, by the Grace of Krishna, your wife is able to do this service, and please keep her engaged in that way. As soon as one is engaged in the service of the Lord, the Lord will reveal Himself to one without any separate endeavor. Krishna Consciousness movement simply depends on service attitude. So please keep her engaged in this work for which she has got natural taste, and let her translate small booklets like Easy Journey, then gradually she may attend all our other books, and eventually Bhagavad Gita. Please offer my thanks and blessings for her in this endeavor.

Omkara is the alphabetical representation of Krishna. This representation of Krishna is impersonal, just like His lustre of the Body, Brahman effulgence. Impersonalists like to chant Omkara, but we wish to chant His Feature of Pastimes, because His personal feature is the ultimate understanding. Omkara is the symbol of eternity, but there is no bliss and knowledge. Om Tat Sat: Tat means the Absolute Truth, and Sat means eternal. Omkara is also used denoting address. Om Tat Sat means, oh, the Absolute Truth is Eternal.

Shanta-rasa means appreciation of the greatness of the Lord, but there is no active service of the Lord. The land, the grass, the trees, the plants, fruits, or the cows in the transcendental world are supposed to be situated in the shanta-rasa. As spiritual beings, they are all conscious of Krishna, but they prefer to appreciate Krishna's greatness remaining as they are.

In the spiritual world there is no such relationship as God as the father. In the material world such conception is appreciated very much. In the material world everyone wants to take from God because the conditioned soul wants to enjoy senses. And the concept of fatherhood is to drag resources from the Supreme. But in the spiritual world there is no question of drawing from the Supreme. Everything there is to serve the Lord, and service is rendered in 5 different rasas or transcendental humors as described above. In the transcendental world instead of taking the Lord as father, He is treated as son, because son derives service from the Father, whereas in the material world the father maintains the conditioned souls or sons of God.

Rupa Goswami's eternal rasa is conjugal love. He is one of the associates of Radharani, and he helps Radharani while engaged in the service of Krishna. He is known as Rupamanjari in the spiritual world.

Tatam asi means you are that. You are that, means you are also Brahman. That means qualitatively you are one with the Supreme Absolute. The Mayavadi philosophers interpret this Tatam asi that the living entity is the same Supreme Absolute Truth. They do not make any difference of quality and quantity, but Vaishnava philosophers are very accurate in their estimation of the Absolute Truth. Therefore, we interpret this Vedic verse as Tatam asi means that the living entity is qualitatively one, as much as a particle of gold is also gold.

Thanking you once more for your very excellent work there, and hoping you are well.