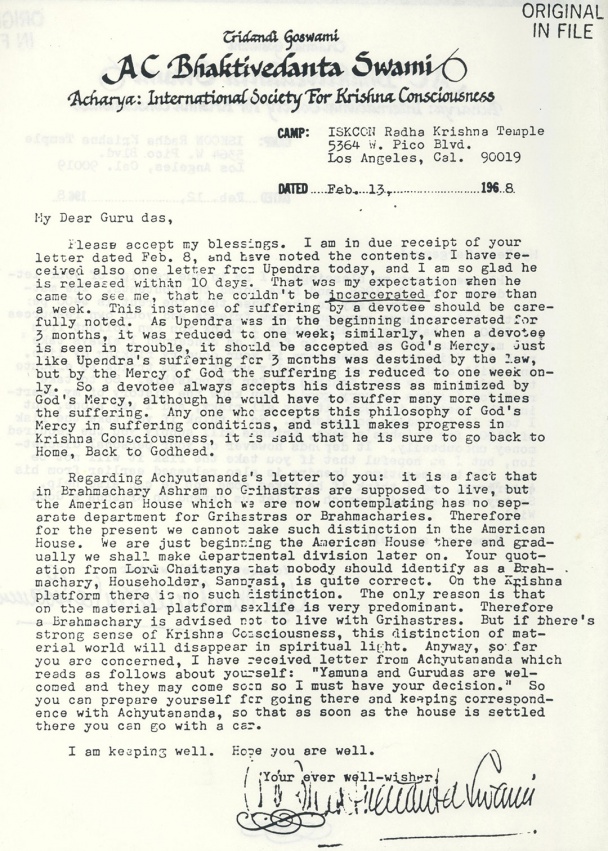 Regarding Achyutananda's letter to you: it is a fact that in Brahmachary Ashram no Grihasthas are supposed to live, but the American House which we are now contemplating has no separate department for Grihasthas or Brahmacharies. Therefore for the present we cannot make such distinction in the American House. We are just beginning the American House there and gradually we shall make departmental division later on. Your quotation from Lord Chaitanya that nobody should identify as a Brahmachary Householder, Sannyasi, is quite correct. On the Krishna platform there is no such distinction. The only reason is that on the material platform sex life is very predominant. Therefore a Brahmachary is advised not to live with Grihastas. But if there's strong sense of Krishna Consciousness, this distinction of material world will disappear in spiritual light. Anyway, so far you are concerned, I have received letter from Achyutananda which reads as follows about yourself: "Yamuna and Gurudas are welcomed and they may come soon so I must have your decision." So you can prepare yourself for going there and keeping correspondence with Achyutananda, so that as soon as the house is settled there you can go with a car.