670521 - Letter to Mukunda and Janaki written from New York 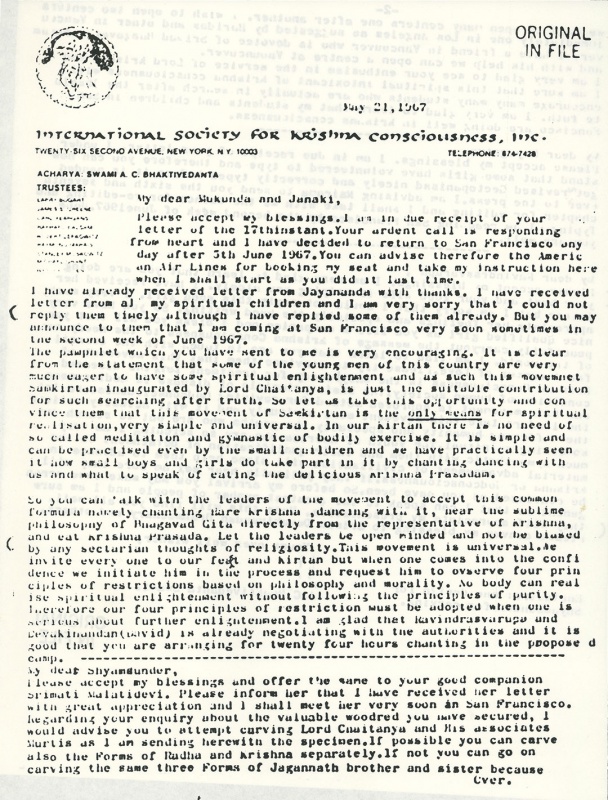 Letter to Mukunda and Janaki (Page 1 of 2) 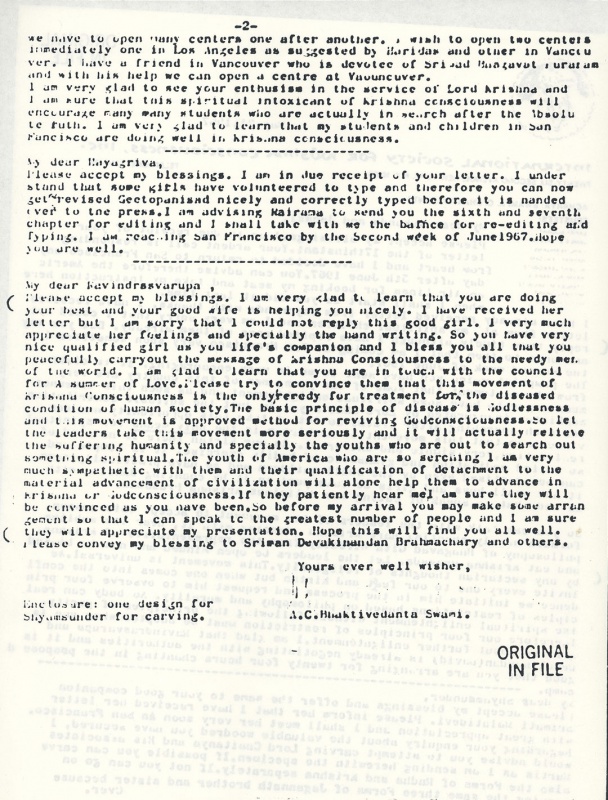 Letter to Mukunda and Janaki (Page 2 of 2)

My Dear Mukunda and Janaki,

Please accept my blessings. I am in due receipt of your letter of the 17th instant. Your ardent call is responding from heart and I have decided to return to San Francisco any day after 5th June 1967. You can advise therefore the American Air Lines for booking my seat and take my instruction here when I shall start as you did it last time.

I have already received letter from Jayananda with thanks. I have received letter from all my spiritual children and I am very sorry that I could not reply them timely although I have replied some of them already. But you may announce to them that I am coming at San Francisco very soon some time in the second week of June 1967.

The pamphlet which you have sent to me is very encouraging. It is clear from the statement that some of the young men of this country are very much eager to have some spiritual enlightenment and as such this movement Samkirtana inaugurated by Lord Chaitanya, is just the suitable contribution for such searching after truth. So let us take this opportunity and convince them that this movement of Samkirtan is the only means for spiritual realization, very simple and universal. In our Kirtan there is no need of so called meditation and gymnastic of bodily exercise. It is simple and can be practised even by the small children and we have practically seen it how small boys and girls do take part in it by chanting dancing with us and what to speak of eating the delicious Krishna Prasadam.

So you can talk with the leaders of the movement to accept this common formula namely chanting Hare Krishna, dancing with it, hear the sublime philosophy of Bhagavad Gita directly from the representative of Krishna, and eat Krishna Prasada. Let the leaders be open minded and not be biased by any sectarian thoughts of religiosity. This movement is universal. We invite every one to our feast and Kirtan but when one comes into the confidence we initiate him in the process and request him to observe four principles of restrictions based on philosophy and morality. No body can realise spiritual enlightenment without following the principles of purity. Therefore our four principles of restriction must be adopted when one is serious about further enlightenment. I am glad that Ravindrasvarupa and Devakinandana (David) is already negotiating with the authorities and it is good that you are arranging for twenty four hours chanting in the proposed camp.

Yours ever well wisher,