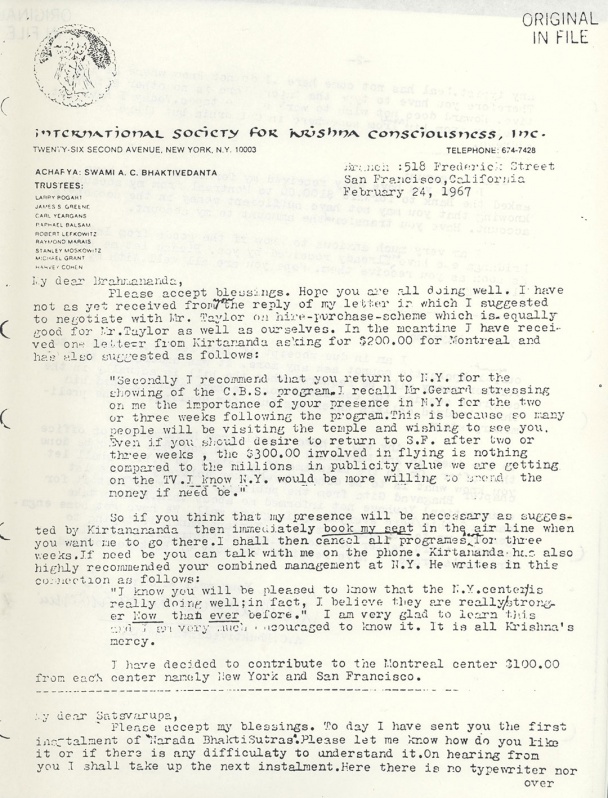 Letter to Brahmananda (Page 1 of 2) 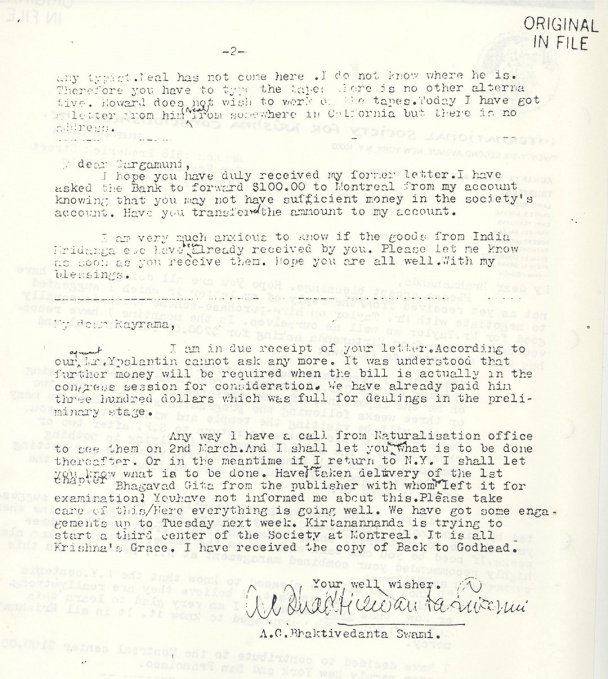 Letter to Brahmananda (Page 2 of 2)

My Dear Brahmananda,
Please accept blessings. Hope you are all doing well. I have not as yet received from you [handwritten] the reply of my letter in which I suggested to negotiate with Mr. Taylor on hire-purchase-scheme which is equally good for Mr. Taylor as well as ourselves. In the meantime I have received one letter from Kirtananda asking for $200.00 for Montreal and has also suggested as follows:

"Secondly I recommend that you return to N.Y. for the showing of the C.B.S. program. I recall Mr. Gerard stressing on me the importance of your presence in N.Y. for the two or three weeks following the program. This is because so many people will be visiting the temple and wishing to see you. Even if you should desire to return to S.F. after two or three weeks, the $300.00 involved in flying is nothing compared to the millions in publicity value we are getting on the TV. I know N.Y. would be more willing to spend the money if need be."

So if you think that my presence will be necessary as suggested by Kirtanananda then immediately book my seat in the air line when you want me to go there. I shall then cancel all programs here [handwritten] for three weeks. If need be you can talk with me on the phone. Kirtananda has also highly recommended your combined management at N.Y. He writes in this connection as follows:
"I know you will be pleased to know that the N.Y. center is really doing well; in fact, I believe they are really stronger Now than ever before." I am very glad to learn this and I am very much encouraged to know it. It is all Krishna's mercy.

I have decided to contribute to the Montreal center $100.00 from each center namely New York and San Francisco.