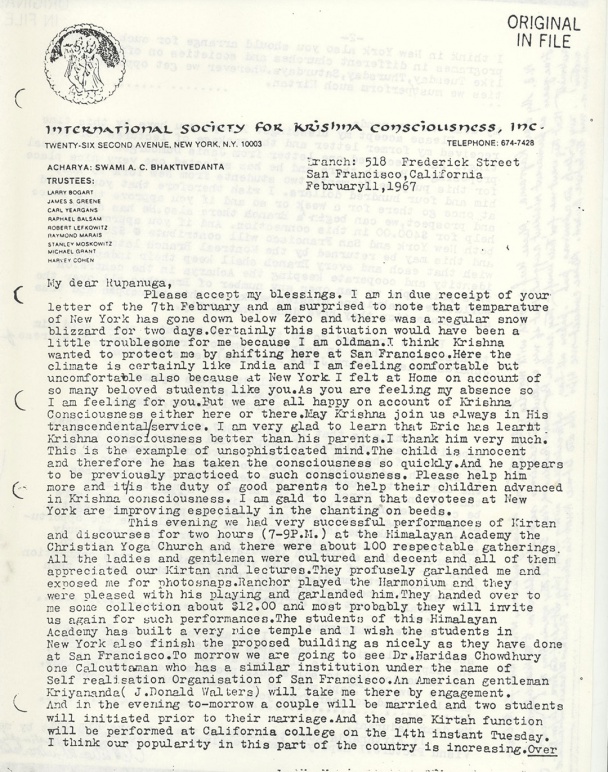 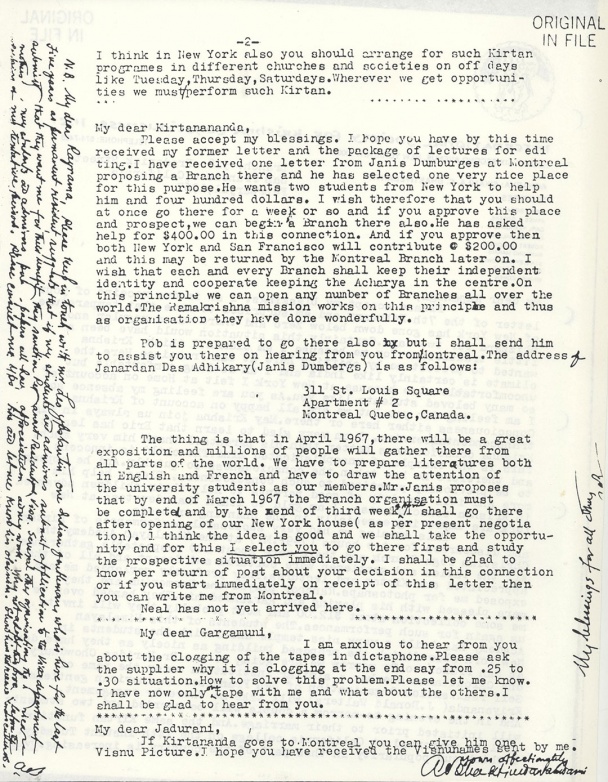 My Dear Rupanuga,
Please accept my blessings. I am in due receipt of your letter of the 7th February and am surprised to note that temperature of New York has gone down below Zero and there was a regular snow blizzard for two days. Certainly this situation would have been a little troublesome for me because I am old man. I think Krishna wanted to protect me by shifting here at San Francisco. Here the climate is certainly like India and I am feeling comfortable but uncomfortable also because at New York I felt at Home on account of so many beloved students like you. As you are feeling my absence so I am feeling for you. But we are all happy on account of Krishna Consciousness either here or there. May Krishna join us always in His transcendental service. I am very glad to learn that Eric has learnt Krishna Consciousness better than his parents. I thank him very much. This is the example of unsophisticated mind. The child is innocent and therefore he has taken the consciousness so quickly. And he appears to be previously practiced to such consciousness. Please help him more and it is the duty of good parents to help their children advanced in Krishna consciousness. I am glad to learn that devotees at New York are improving especially in the chanting on beads.
This evening we had very successful performances of Kirtan and discourses for two hours (7-9 P.M.) at the Himalayan Academy the Christian Yoga Church and there were about 100 respectable gatherings. All the ladies and gentlemen were cultured and decent and all of them appreciated our Kirtan and lectures. They profusely garlanded me and exposed me for photosnaps. Ranchor played the Harmonium and they were pleased with his playing and garlanded him. They handed over to me some collection about $12.00 and most probably they will invite us again for such performances. The students of this Himalayan Academy have built a very nice temple and I wish the students in New York also finish the proposed building as nicely as they have done at San Francisco. Tomorrow we are going to see Dr. Haridas Chowdhury one Calcutta man who has a similar institution under the name of Self realisation Organization of San Francisco. An American gentleman Kriyananda (J. Donald Walters) will take me there by engagement. And in the evening to-morrow a couple will be married and two students will initiated prior to their marriage. And the same Kirtan function will be performed at California college on the 14th instant Tuesday. I think our popularity in this part of the country is increasing. I think in New York also you should arrange for such Kirtan programmes in different churches and societies on off days like Tuesday, Thursday, Saturdays. Wherever we get opportunities we must perform such Kirtan.