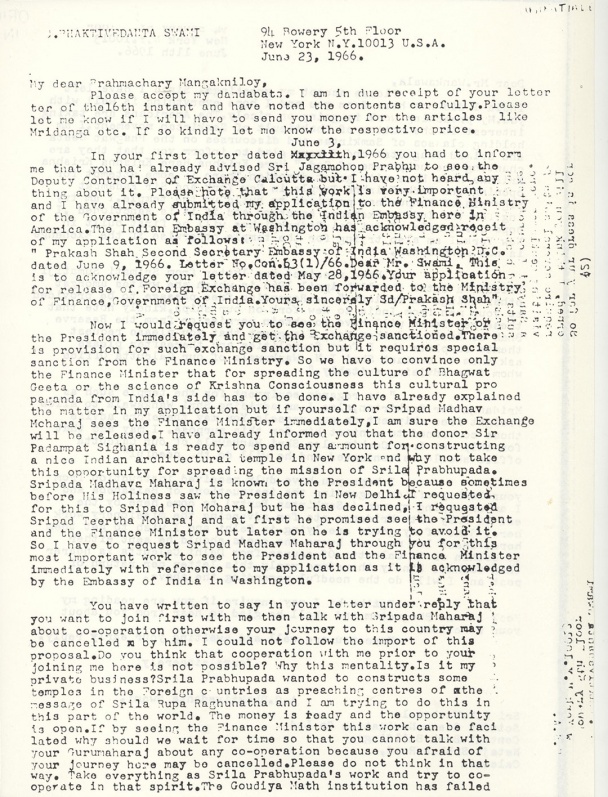 Letter to Mangalaniloy Brahmacari (Page 1 of 2) 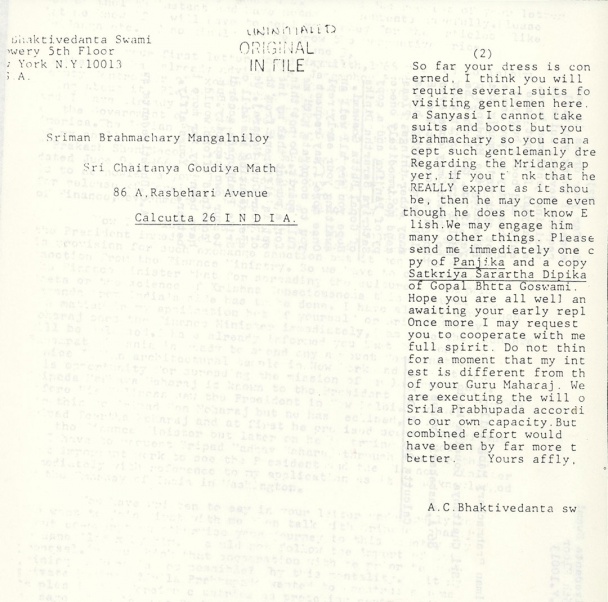 Letter to Mangalaniloy Brahmacari (Page 2 of 2)

My dear Brahmachary Mangalniloy,
Please accept my dandabats. I am in due receipt of your letter of the 16th instant and have noted the contents carefully. Please let me know if I will have to send you money for the articles like Mridanga etc. If so kindly let me know the respective price.

In your first letter dated June 3, 1966 you had to inform me that you had already advised Sri Jagamohon Prabhu to see the Deputy Controller of Exchange Calcutta but I have not heard anything about it. Please note that this work is very important and I have already submitted my application to the Finance Ministry of the Government of India through the Indian Embassy here in America. The Indian Embassy at Washington has acknowledged receipt of my application as follows:

"Prakash Shah Second Secretary Embassy of India Washington D.C. dated June 9, 1966. Letter No. Con. 63(1)/66. Dear Mr. Swami, This is to acknowledge your letter dated May 28, 1966. Your application for release of Foreign Exchange has been forwarded to the Ministry of Finance, Government of India. Yours sincerely Sd/Prakash Shah"

You have written to say in your letter under reply that you want to join first with me then talk with Sripada Maharaj about co-operation otherwise your journey to this country may be cancelled by him. I could not follow the import of this proposal. Do you think that cooperation with me prior to your joining me here is not possible? Why this mentality. Is it my private business? Srila Prabhupada wanted to construct some temples in the Foreign countries as preaching centres of the message of Srila Rupa Raghunatha and I am trying to do this in this part of the world. The money is ready and the opportunity is open. If by seeing the Finance Minister this work can be facilitated why should we wait for time so that you cannot talk with your Gurumaharaj about any co-operation because you are afraid of your journey here may be cancelled. Please do not think in that way. Take everything as Srila Prabhupada's work and try to co-operate in that spirit. The Goudiya Math institution has failed [TEXT MISSING]

So far your dress is concerned, I think you will require several suits for visiting gentlemen here. As a sannyasi I cannot take suits and boots but you are Brahmachary so you can accept such gentlemanly dress. Regarding the Mridanga player, if you think that he is REALLY expert as it should be, then he may come even though he does not know English. We may engage him so many other things. Please send me immediately one copy of Panjika and a copy of Satkriya Sarartha Dipika of Gopal Bhatta Goswami. Hope you are all well and awaiting your early reply. Once more I may request you to cooperate with me in full spirit. Do not think for a moment that my interest is different from that of your Guru Maharaj. We are executing the will of Srila Prabhupada according to our own capacity. But combined effort would have been by far more better.
Yours affly.