580802 - Letter to Harbanslal written from Bombay 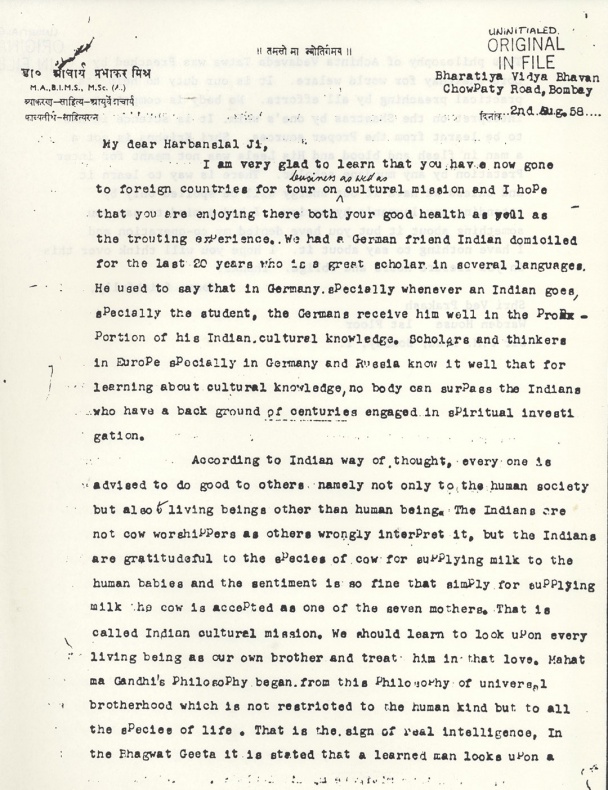 Letter to Harbanslal (Page 1 of ?) 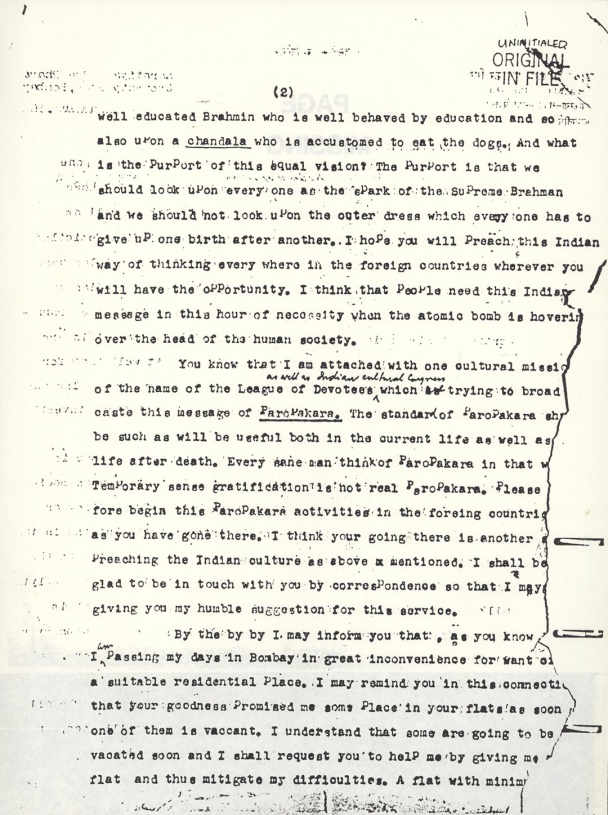 Letter to Harbanslal (Page 2 of ?)

I am very glad to learn that you have now gone to foreign countries for tour on business as well as[handwritten] cultural mission and I hope that you are enjoying there both your good health as well as the trouting experience. We had a German friend Indian domiciled for the last 20 years who is a great scholar in several languages. He used to say that in Germany specially, wherever an Indian goes, specially the student, the Germans receive him well in the proportion of his Indian cultural knowledge. Scholars and thinkers in Europe specially in Germany and Russia know it well that for learning about cultural knowledge, no body can surpass the Indians who have a back ground of centuries engaged in spiritual investigation.

According to Indian way of thought, every one is advised to do good to others namely not only to the human society but also to living beings other than human being. The Indians are not cow worshippers as others wrongly interpret it, but the Indians are gratitudeful to the species of cow for supplying milk to the human babies and the sentiment is so fine that simply for supplying milk the cow is accepted as one of the seven mothers. That is called Indian cultural mission. We should learn to look upon every living being as our own brother and treat him in that love. Mahatma Gandhi's philosophy began from this philosophy of universal brotherhood which is not restricted to the human kind but to all the species of life. That is the sign of real intelligence. In the Bhagwat Geeta it is stated that a learned man looks upon a well educated Brahmin who is well behaved by education and so also upon a chandala who is accustomed to eat the dogs. And what is the purport of this equal vision? The purport is that we should look upon every one as the spark of the Supreme Brahman and we should not look upon the outer dress which every one has to give up one birth after another. I hope you will preach this Indian way of thinking every where in the foreign countries wherever you will have the opportunity. I think that people need this Indian message in this hour of necessity when the atomic bomb is hovering over the head of the human society.

You know that I am attached with one cultural mission of the name of the League of Devotees as well as Indian cultural Congress [handwritten] which is trying to broad caste this message of Paropakara. The standard of Paropakara should be such as will be useful both in the current life as well as life after death. Every sane man thinks of Paropakara in that way. Temporary sense gratification is not real Paropakara. Please therefore begin these Paropakara activities in the foreign countries as you have gone there. I think your going there is another [text missing] preaching the Indian culture as above mentioned. I shall be glad to be in touch with you by correspondence so that I may be giving you my humble suggestion for this service.

By the by by I may inform you that, as you know I am[handwritten] passing my days in Bombay in great inconvenience for want of a suitable residential place. I may remind you in this connection that your goodness promised me some place in your flats as soon as one of them is vacant. I understand that some are going to be vacated soon and I shall request you to help me by giving me a flat and thus mitigate my difficulties. A flat with minimal